When it comes to thundering hooves and flashing horns, Spain has its running of the bulls in Pamplona, Canada has its Calgary Stampede, and Switzerland has its cow fights in the Val d’Hérens town of Aproz.

That’s right. Cow fights. One of the least-known bovine sporting events in the world culminates each spring with the crowning of La Reine des Reines – the Queen of the Queens – in this small community tucked away in the Valais canton of the Swiss Alps.

Don’t expect to see the ghost of Ernest Hemingway sitting in the stands as these massive beasts lock horns to determine which of them will end the day with a crown of flowers and a large, decorative bell around its neck.

Unlike the bloody corridas in Spain, the macho American author extolled in books and magazines, where ears, hooves and tails of slaughtered bulls are awarded to patrons in the stands, these Hérens cattle leave the ring intact – except, perhaps, for a loss of pride at not winning the championship.

It’s a natural instinct among the female members of the Hérens breed to jostle each other crankily once they have been released from the barns where they were housed over the winter. And when push comes to shove, the alpha female – the one intimidating all the other members of the herd – gets the best pastureland over the summer.

The wily Swiss have capitalized on this bovine rivalry and hold competitions in a number of alpine villages each spring. Townsfolk as well as breeders and cow-fighting enthusiasts flock to watch the tussles, bet unofficially on their favorites and wash down mounds of cheese and basketfuls of bread with flagons of local wine.

The ultimate champion emerges from the Aproz event in May, providing its owners with bragging rights and top dollar – or, more accurately, Swiss franc – when the winner is auctioned off at a later time.

The tension was high when I booked into a small gîte in the alpine village of Evolène, a 30-minute, nail-biting drive down a mountain pass from Aproz. A gîte, as backpackers who have roamed rural France and Switzerland know, is a small, rustic cabin that provides basic shelter for the night. Marius and Catherine Pannatier rent out three of these no-frills cottages (www.giteruralevolene.ch), and Marius is proud of the fact that he built them himself.

“Carpentry is my trade but I love cows,” said Marius as he led the way to a large barn on his property where about 40 head of Hérens cattle were bellowing lustily in their winter stalls.

The excitement in the air was due to the fact that one of the stable dwellers was slated to appear in the finals that day in Aproz, having won a regional competition the week before.

The cow of the hour was called Rubis, the French spelling for the deep red gem. The Pannatiers’ three youngsters had named this regional champion, just as they had tagged her mother with the moniker Diamant (Diamond) and her sister with the handle Saphir (Sapphire).

Is Ruby Ready to Rumble?

The first inkling that Ruby might not be quite ready for her tough-guy encounter with the other regional champions in Aproz was the fact that Marius and his helpers loaded both her and her sister into the back of the small truck that would take them to the championship event.

“Ruby doesn’t like to travel alone, so even though Sapphire isn’t in the competition, we bring her along for company,” said Marius as he tapped both beasts lightly on their hindquarters to urge them up the ramp and into the truck.

And speaking of hindquarters, the first order of business in Aproz was to lead Ruby to an area where event officials painted the number 92 on her flanks so the program-wielding spectators could keep track of their favorites.

Things get a bit hectic when a dozen or more of the beasts are let loose in the ring and urged to square off against all the others, with the last one standing her ground declared the winner.

Suspicions about Ruby’s lack of readiness were borne out when she was left to her own devices in the ring and all she wanted to do was amble over to the roped-off area of the “battleground” and stare at the crowd in the bleachers. Her handlers would tap her on the rump to try to urge her into the fray but she would simply turn her head to give them an annoyed look, then focus her attention again on the spectators, who seemed amused at her pacifist tendencies.

But there is no room for a non-combatant in the Aproz cow ring. A disembodied voice on the loudspeaker politely suggested the owners get that sissy out of the way by announcing: “Merci aux patrons de Rubis.” That was the signal for Ruby to make a quick and ignominious exit from the field of battle.

While Ruby munched contentedly on a bale of hay Marius scattered in front of his mild-mannered and now tethered wash-out, the scuffles in the animal amphitheatre up the lane from her continued on for several hours until only one cow remained defiant and ready to tell all the others to butt out.

The Pannatier children had to content themselves with the fact that another beast with the name Ruby eventually became La Reine des Reines. Unlike thoroughbred horses, there is no limit to the number of competitors having the same appellation.

And, as with virtually every sporting event in the world, the never-say-die owners of the timid Ruby uttered a universal cri de coeur as they loaded their 568-kilogram charge back into the truck for the long drive home: “There’s always next year!” 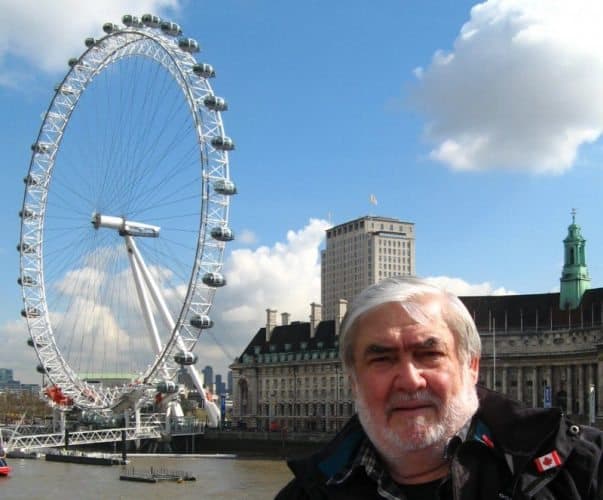 Tom Douglas, a Founding Member of the Travel Media Association of Canada (TMAC) and a member of the National Press Club, is a best-selling author, communications consultant, travel writer and travel promoter whose career has taken him around the globe and then some.. Visit his website.