Cycling and Cruising the Danube River

Cruising the Danube and Biking by its Banks

Passau, Germany, a picturesque town in lower Bavaria, is known as the “City of Three Rivers.” It was where I would begin a week-long bike and boat tour on one of those rivers, the Danube, a waterway immortalized in song by Johann Strauss, composer of “The Blue Danube Waltz.”

After a day of sightseeing in Passau Germany, my traveling companion and I were ready to board the ship that would be our home for a week as it sailed from Passau to Vienna, Austria.

We would meet up with the ship at the end of each day as we rode along the Danube Cycle Path. During the week ahead, there would be opportunities to visit castles, monasteries, beautiful medieval villages and even the remnants of unfathomable evil, a Nazi
concentration camp.

We would also take in the sights of the beautiful city of Vienna and enjoy spectacular scenery along the way. All the while, we’d be getting a workout by cycling as much as 30 miles a day.

It was easy to spot the ship among the many docked along the Passau wharf because it was the only one with dozens of bicycles lining the decks.

Being that it was early autumn and this was the second to last trip of the season, there were about 85 passengers on board from the United States, Canada, Australia, and numerous European countries.

The cabins, which have two or three beds each, are compact but efficiently designed for the small space, which includes a bathroom and a TV. Crew members clean the cabins daily.

After getting settled into our cabins, the first order of business was the information meeting conducted in English by friendly but low-key cruise director Andreas Hummer followed by a similar meeting he conducted in German. Following the meeting were the captain’s welcome dinner, a multi-course meal and the only dinner of the week for which we were not provided a meat, fish, or vegetarian entrée option.

It also was an opportunity to meet our table mates, as every cabin had an assigned table in the dining room. In addition to the dining room, the Theodor Korner has a bar with a dance floor, a salon with a patio, a broad sun deck, a library, and a sauna. Befitting a ship carrying passengers riding bikes throughout the day, casual clothing was sufficient.

Just before our first dinner on the ship, we set sail from Passau to Mauthausen in upper Austria. That’s where we began our first full day of the tour with a lavish buffet breakfast, at which we were able to pack our lunch to take with us on our bikes. After breakfast, we were provided with our bike for the week, which was assigned based on height information submitted prior to the tour.

We also received saddlebags, locks and a toolkit that I fortunately never had to use. Helmets were recommended, but not required. Most cyclists brought their own helmets. We also had books with maps and directions and recommendations for side trips that would take us off the Danube Cycle Path.

The First Day on the Cycle Path

The first side trip opportunity was to the Mauthausen-Gusen concentration camp, a short ride from where the ship was docked but a journey back in time to a very dark period in the region’s history.

From Mauthausen, we’d be riding 36 kilometers or about 22 miles to that day’s destination, the town of Grein, where we would meet up with the ship. Early arrivals were offered coffee and cake in the ship’s lounge.

Life on the Ship

Although dinner time on the ship varied slightly through the week, it was usually served around 7:00 with a formal dinner setting and a multi-course meal. Passengers were asked to submit their entrée selections before leaving in the morning, choosing among meat, fish and vegetarian options. Although meals were included in the price of the tour, dinner beverages were not.

We were served by friendly and efficient members of the ship’s crew, most of whom were from the Slovak Republic, who worked long days without a day off.

While some of the passengers took in a show at the Grein Theatre and others spent the evening in their cabin, where the TV provided a selection of German-language programming, others spent at least part of the evening in the ship’s bar and lounge area where we were entertained by a spirited musician from the Czech Republic who didn’t speak English but phonetically sang a repertoire of American pop music hits from earlier decades.

On any given night, those in the lounge were likely to hear and maybe singalong and dance to “Gloria,” “Sweet Caroline” and “Hey Baby (If You’ll be My Girl).”

The next day’s destination was the picturesque town of Melk, a distance of about 30 miles if riding there directly with no side trips. Overlooking Melk is the massive Melk Abbey, built in the early 1700s in Baroque style. We had time to explore Melk before returning to the boat for a 6:15 departure.

As we ate dinner, the ship sailed to the town of Tulln. From there the following day, we cycled 19 miles to Vienna, or Wien in German, the shortest ride of the week.

While the ship was docked some distance from the center of the city, it was a quick walk to public transportation and an easy and direct bike ride along the Danube Channel into central Vienna. Although we’d have the entire following day in Vienna, most of the people on the tour were anxious to start seeing the city’s sites.

About 25 of us decided to explore Vienna on two wheels and had signed up for an approximately three-hour guided city tour by bike the following morning. Afterward, I locked my bike outside Saint Stephens Cathedral and continued touring the city on foot. After about a day and a half in Vienna, the boat departed that night for the town of Krems.

From Krems we would cycle about 22 miles to Emmersdorf to meet the ship. Riding through the Wachau region, we passed vineyards and stopped to sample some wines. Also along the route was the much-visited town of Durnstein, where the narrow streets were lined with cafes and shops selling Austrian souvenirs.

With just two more nights on the ship, this was the evening the crew put on a show. They sang, danced and performed skits, providing an opportunity for the passengers to see the hard-working crew members in very different roles.

During the night the ship traveled from Emmersdorf to Untermuhl, where we started our final day of cycling, an approximately 22-mile ride to Engelhartszell that took us through wilderness areas on a route that required several river crossings on bike ferries as we switched back and forth between the left and right banks of the Danube. Not including side trips, we rode a total of 115 generally flat miles during the week.

After returning to the ship, it was time to turn in our bike equipment, including the unused toolkit, to the cruise director. That evening we were treated to the captain’s farewell cocktail reception and gala dinner. It was an opportunity to thank the crew and exchange contact information with other passengers. Early the following morning the ship departed Engelhartszell and returned to Passau, where the journey began.

Following our final breakfast on the ship, we were back in the “City of Three Rivers,” has become very well acquainted with one of them during the past week.

The passengers started to disembark at around 9:30 and the crew began to prepare for the next group of passengers, who would be boarding the ship that afternoon for the final tour of the season.

More information on this tour and other Danube River bike and boat tours is available at www.eurocycle.at. 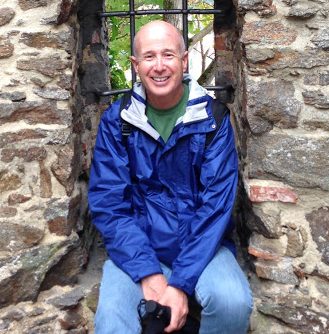