Celebrating Autumn at a place where ‘local is a mantra’

Just at the vernal equinox, the channel is switched from summer to fall. And then fall seems to fly by. Every gust takes down the colors revealing the skeletal shapes of the trees with hints of what’s coming next.

I felt the urgency, as I do every year, to jump into fall before it was gone.

I picked Buttermilk Falls Inn and Spa as a base. It’s in the small, sleepy Hudson Valley hamlet of Milton New York, just across the Mid-Hudson Bridge from Poughkeepsie.

I timed it just right for peak foliage in October. A deep blue sky was the backdrop for the vibrant colors. Zen magic was in place as the leaves twirled, soared, drifted and dropped creating a stage set with an authentic mosaic forest floor.

The majestic Hudson River was in the distance revealing and reflecting this autumnal tapestry.

My first stop was for lunch at Frida’s Bakery and Café owned by the same folks that own the Buttermilk Inn and Spa and where they get their artisan bread.

Frida’s has creative wraps, sandwiches, soups, and salads. The bakery has a multitude of sweet and savory pastries. The menu boasts that breakfast is served all day. Time begins to slow down in this relaxed atmosphere. Everyone is friendly. They aim to please.

Down the road from Frida’s is Buttermilk Falls Inn and Spa. It’s set on a 75-acre Hudson River estate with a farm-to-table restaurant, Henry’s at the Farm housed on the second floor of a barn.

The main house dating back to 1764 has ten rooms and there are seven private unique cottages and guest houses scattered about that have retained and incorporated the character and artifacts of the past blended with a modern twist.

My room was spacious with a kitchenette, a stone fireplace and sweeping views from the 20-foot deck overlooking the Hudson. I was there for the super moon and got to see it rise on the distant ridge. It was the icing on the cake.

There’s a network of trails that meander through the property with farm and river charm. Millstone Farm is an organic seasonal garden that provides some of the produce for the restaurant. There’s an aviary and an animal sanctuary that houses rescued animals including goats, llamas, alpacas and donkeys.

There are resident heritage chickens roaming the grounds and providing the fresh eggs every morning. The beehives produce a creamy honey. On the edge of the property after a short hike is the namesake, Buttermilk Falls and a path that goes right down to the river and the railroad tracks.

The eco-friendly spa focuses on green philosophy. They use solar-power and geothermal energy to heat the sauna, steam and mineral saltwater infinity-edge pool. The cathedral glass ceiling and windows expose nature and a view of the Hudson.

Henry’s at the Farm offers contemporary country food that showcases ingredients from local farms and is known for its signature cocktails- “Barn to Bar”.

There’s a Lavender Sidecar with honey from the on-site beehives infused with homegrown lavender, with Remy Martin and Cointreau. “At Henry’s local isn’t a trend, it’s a mantra.”

town known for its apple orchards. The structure was originally proposed as a railroad bridge in 1855 and was finally started in 1886. When the bridge opened in 1889, it was the longest bridge in North America and the first bridge to span the Hudson River between Albany and New York City.

It became a key transportation hub linking western raw materials to eastern industrial centers until the fire in 1974 that closed it down. In 2009 it opened as the longest pedestrian bridge in the world. Now That’s 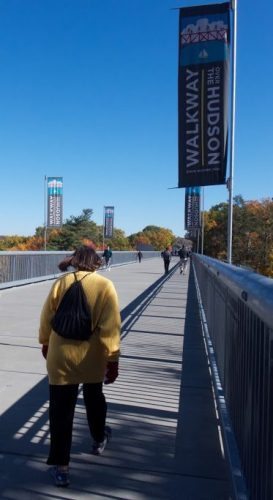 The Walkway over the Hudson connects with the Hudson Valley Rail Trail–a paved four-mile east–west rail trail in the town of Lloyd in Ulster County, New York, stretching from the Hudson River through the hamlet of Highland through hardwood forests, over Black Creek and under two spectacular stone-arch bridges.

Also nearby, just outside of the funky town of New Paltz is the Shawanagunk Ridge or the Gunks. It is a geological landscape that is otherworldly. It’s best known as one of the best rock climbing areas in North America. I accessed the area at Minnewaska State Park Preserve.

The Preserve is situated on the dramatic Shawangunk Mountain ridge, which rises more than 2,000 feet above sea level and is surrounded by rugged, rocky terrain.

BThese trails are even groomed in the winter for cross-country skiing! All this is within an hour and a half drive from New York City. Both lakes are set into white conglomerate cliffs and encircle the carriageways that provide easy access to breathtaking views.

The numerous scenic overlooks in the park are destinations by themselves, with varied and sweeping views of the lakes, cliffs, expanses of Pine Barrens, and valleys below. This was the peak of my fall experience.

Any season, this area has a lot to offer- walking, hiking, biking, swimming, rock-climbing, bouldering, boating, horseback riding and marveling at the exquisite scenery.

www.shelleyrotner.com
Like this article? Share it with your friends!
If we've inspired you to travel with this story, why not check out the prices to get there and make it happen. Search airfares, hotels, and rental cars here. Thanks!