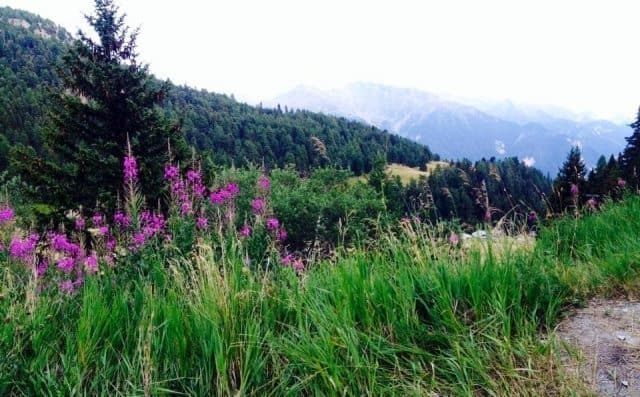 The view from l’Orgère with the clouds in the distance rolling in.

You know that you’re good friends if, after an intensive six-day hike that started with an alarm that rang at 2:30 in the morning and an 11-hour journey, you can still look at each other with love in your eyes.

Well, my friend Femke and I passed the test this August, when we ventured on a hut-to-hut hiking trail in Parque de la Vanoise, France.

Our mountain hike adventure started off in Modane, a sleepy French village in the Savoie region. Modane’s Tourist Information Office is right next to the train station, on the right-hand side when exiting the Arrivals hall, and this is where we made our first stop to set out our final trail.

Tip: Book your stays in the mountain lodges a couple of weeks in advance, as some of them may be fully booked, especially in the holiday season.

The lodge of l’Orgère, which was our first stop, is very easy to reach by car, and we found out that most people don’t even bother to make the (very steep) hike up the mountain by foot.

However, young and brave as we are, we decided that cars are for the faint-hearted and set off on the three-hour climb anyway.
Femke in front of Refuge Plan Sec.

Tip: Look out for the wooden signs on each significant crossing, which will tell you the expected time to any destination.

It has to be said that, despite the considerable amount of sweat we lost because of the arduous ascent, our not overly light backpacks and the ‘pleasantly’ warm temperature, the gratification of looking down on the valley we just came from made everything worthwhile.

Besides for the furry pets (two rabbits and a house cat), l’Orgère stood out for its bright, colorful terrace and gorgeous views over a green meadow scattered with the requisite Alpine flowers, mountain woods and peaks. Both Femke and I felt like we’d landed in a tourist brochure!

The shared living room boasted a fireplace and although the food was very bland, the bunk bedrooms and shared bathrooms were clean and serviceable. We found that the staff on site acted professionally rather than very welcoming.

Our second day led us from l’Orgère to our second lodge, Plan Sec. I managed to capture some dramatic photographs, thanks to the clouds rolling in, and luckily it was only after lunch that those clouds started producing rain. The clouds rolling in between the mountain peaks made for a dramatic sight.
Camping at Le Repoju — an incredible backdrop.

Tip: If you’re doing a multiple-day hike, reserve lunch packages at the mountain lodges. They are usually very good and will save you the weight of carrying too much food.

Although the constant walking will keep you sufficiently warm, it is advisable not to take long breaks in the rain, as your body will cool off quickly. I would also recommend wearing a poncho or rain jacket at all times, even though it might feel a bit sweaty.

Since our route was relatively level the rain didn’t cause us too much inconvenience (it made us get to our destination faster!), except for the fact that the otherwise beautiful views were now replaced by the sight of… a big fat cloud.

Arriving at Refuge Plan Sec was a delight, and not only because it was dry inside. We were offered a separate room that boasted a comfy double bunk bed and the staff on site were the kindest we’d encountered all week. They made us the most delicious meal, which was perfectly finished with Crème Brûlée Flambée and a shot of Génépi. The Crème Brûlée that made our day!

Tip: while you’re in the Alps, try a shot of the local aperitif Génépi, which is a delicious herbal liqueur made of an Alpine flower of the same name.

If you like the idea of a smaller, more traditional Alpine lodge with gorgeous views over a blue-green lake and staff that really make you feel at home, I would heartily recommend Plan Sec. Plan Sec also has a spectacular view over the lake Plan d’Amont.

The hike from Plan Sec to le Repoju definitely was the toughest of the week, due to the distance and altitude change as well as the fact that my companion had gotten slightly ill. Nevertheless, crossing the valley from Plan Sec to the foot of Col d’Aussois was a beautiful experience, and clambering up the rocky mountainside was fun and challenging.

We even encountered our first perpetual snow from up close and personal and felt an amazing sense of achievement looking back on the distant lake where we had started our day.
Tip: When on top of the Col d’Aussois, take half an hour to go up to the observatory (about 1.8 miles high) from where you’ll have an excellent view of the glaciers and even Mont Blanc!

Tip: after descending the other side of the mountain range, rest a little at Ritord farm, a great hangout for locals and hikers to enjoy a cold beer.

A short distance before Pralognan we found our inn, and although we ended up sleeping in a tent full of insects that night, we’d never been so happy to arrive at our destination. We finally reached our destination after an exhausting 10-hour hike.

Le Repoju is a warm and homey tavern and restaurant, located amongst a tiny group of houses just a short distance from the ‘real village’ of Pralognan. Since it’s situated so close to the car park where many hikers start their climb, it’s pleasantly buzzy and it also has rooms available for ramblers passing through.

Tip: Le Repoju is a much cheaper alternative to the nearby Roc de la Pêche, so if you’re traveling on a budget (as we were) I would recommend this option. 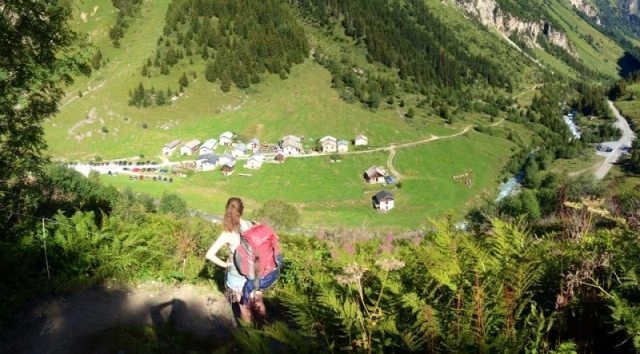 I’m not sure to what extent we were biased by our delight to have arrived at our destination after 10 hours of hiking, but both Femke and I look back on Le Repoju with many warm and happy feelings. Femke looking out over the valley and the tiny little hamlet that housed le Repoju.

On the fourth day of our trip, we decided to take it easy, since our next lodge was only a three-hour hike away. This turned out to be a splendid idea indeed. The weather once again was lovely (in fact, day two was the only time we encountered any serious rainfall) and we took a long lunch break that involved lots of chatting, napping and snoozing in the sun.

From La Valette we made the 10-minute descent to Lac de la Valette, where we took a swim in the glacier water.

Tip: From the lodge of La Valette, make the short descent to the lake, where you can take a swim in the glacial water.?

Staying at La Valette is your typical mountain hut experience. Firstly, it has to be said that its high-altitude location is simply gorgeous: surrounded by mountain peaks, chamois and marmots you will literally feel a world away from hectic, polluted city life. At night, the amount of stars you can see is fantastic.

Another reason I say it’s a ‘typical mountain hut experience’ is that La Valette has those typical French toilets (you know, the ones that make you squat), and you’ll also find yourself sleeping in a dormitory, lying shoulder to shoulder with a few dozen other hikers on what I can only describe as a metres-long, continuous bunk bed. 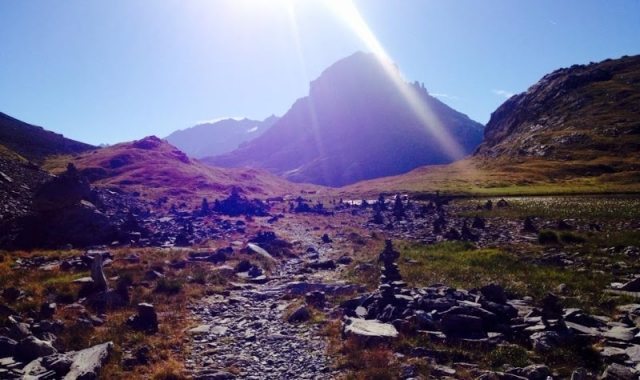 Tip: Bring wax ear plugs. However, the atmosphere in La Valette is lovely and, since it’s not too far away from the valley, you’ll find yourself amidst a convivial group of hikers of all kinds, including some younger ones.

At La Valette we also had our first local Alpine beer, called Bière Des Guides, which is a yummy blonde beer made with saffron.

The route from la Valette to Col de la Vanoise is certainly one of the most adventurous ones, involving the crossing of various wild rivers, virtually vertical descends and, to top it all off, a slope that Femke and I baptized ‘the Descent of Death’, *thunderclap*.

While we decided to tell our friends and family that it was covered with bones and skulls of hikers who didn’t get out alive, the truth is that this descent (which we were confronted by approximately halfway) was just very, very steep and also very slippery because of the recent rain.

Tip: For this route, you might want to take your hiking sticks and maybe even a piece of rope. With the help of two experienced hikers, we eventually managed to make it down and we got to our last refuge, Col de la Vanoise, more or less in one piece.

The refuge Col de la Vanoise is a popular lodge for locals, tourists and Alpine Club members alike. It was by far the busiest lodge we stayed at, which meant it was very well organized but not as homely and welcoming as other refuges like Plan Sec.

Despite the fact that this was our least favorite lodge, it did have its location going for it and the views of the nearby glaciers were stunning.
Tip: When around Col de la Vanoise, be on the lookout for Edelweiss! 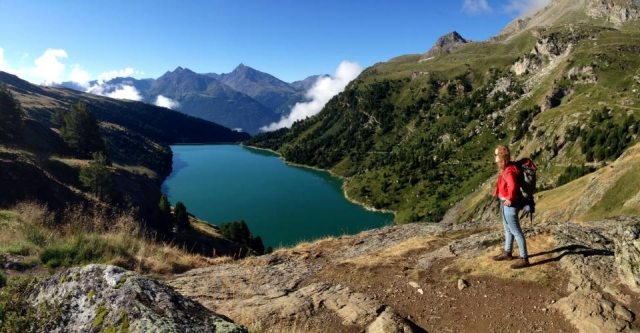 On the last day of our hike we wandered down from Col de la Vanoise to Plan du Lac, where our Alpine adventure would end. The main part of this journey was horizontal, so it was a good way to relax our muscles and get used to level ground again.

On your way south-east from Col de la Vanoise you will pass by three beautiful lakes and you’ll also find a very curious plain where hikers have virtually made an art form out of creating piles of stones to guide fellow hikers along the right or easiest route.

The walk from Col de la Vanoise to Plan du Lac took us less time than expected, even though we made a stop along the way at Entre Deux Eaux, another family-run refuge that I think would have been really nice to stay in.

We didn’t spend much more than an hour there, but our impression of Plan du Lac was that of a typical ‘mountain border lodge’, buzzing with tourists, day-trippers and families with (loud and crying) children.

Although we considered it, in the end, we decided not to spend the night there, and instead hitchhiked our way back down to Modane, from where we took the train to Venice.

Out of the Mountains, Back to the City

Readjusting to the normal things like being surrounded by people, dealing with traffic and wearing make-up was a challenge, but what’s for certain is we finished our hike re-energised and more connected with each other and nature. 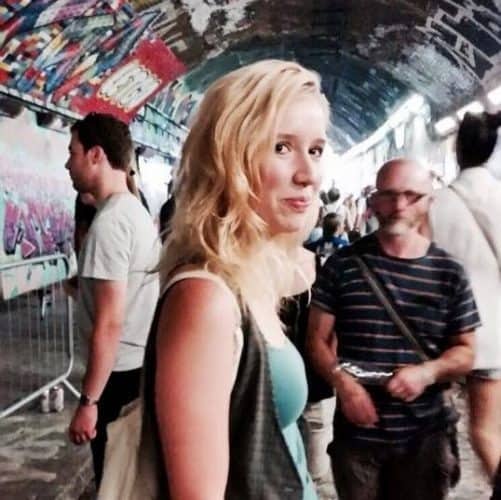 Desiree Michels, a passionate traveler, and writer, has found a niche for herself as a Social Media Manager and Content Marketeer at LeadGeneratorsDigital, a digital agency in London specializing in online marketing for the travel industry. Desiree grew up in the Netherlands and now resides in London since February 2014. Her off-the-beaten-track travel explorations include (but are not limited to) places in Sweden, France, Italy, Spain, England, Belgium, Hungary, Malaysia and the United States.