Richmond, A Southern Jewel of a City

I am never sure how other people travel in terms of what they think about the livability of their destinations. Even though I’m a very happy resident of Western Massachusetts’ Pioneer Valley, and I will not be leaving anytime soon, I inevitably evaluate every place I visit with a simple question, “Would I be happy living here? ”

With a lot of destinations, I will excitedly ask myself that question and answer affirmatively, but usually by the end of the trip, despite how much I enjoy the trip, I realize I would not want to live there.

Free Things to Do in Richmond VA

With Richmond, it was the opposite. If I ever decide to leave Western Massachusetts, Richmond Virginia will be at the top of the list of possible destinations for a new place to live. I can’t think of a better compliment to this jewel of a Southern city since I am a Southerner by birth.

Richmond has some very heady days coming up, and the world’s sporting spotlight will shine brightly.

In September 2015, an estimated 450,000 visitors descended on Richmond from all over the world to see the Union Cycliste Internationale (UCI) Road World Championships (Worlds).

For many Americans unfamiliar with competitive bike racing, the Worlds are not well known. For international bicycling fans, however, the Worlds are the number two race behind the acclaimed Tour De France.

A nine-day event, Worlds featured 12 Championship races for Elite Men and Women, Under 23 Men, and Junior Men and Women. The athletes compete for their countries, just as they do during the Olympic Games.

Athletes compete in three different disciplines including the traditional Road Race, the Individual Time Trial and the recently introduced Team Time Trial. World Champions are crowned in each.

Again, for a bicycle race that most Americans have never heard of, the Worlds are an international media phenomenon. Unbelievably, 83% of all European television households will tune into some portion of the Worlds nine days of competition, even with a 5 to 7-hour time difference, and the races will be broadcast live to a global audience of more than 300 million people.

The last time a United States city hosted the Worlds was 29 years ago: Colorado Springs in 1986.

What Will They Find?

When hundreds of thousands of international and U.S. visitors descend on Richmond for the Worlds, what will they find in the city that is the Virginia state capital and once, the capital of the Confederacy.

If you’ve only driven through Richmond on I-95 while heading South or North, you may be as surprised as I was when I recently visited Richmond. Seriously, who knew? There are probably many Richmond residents who would prefer that their city stay a well-loved secret.

Richmond is a vibrant Southern city with a multitude of livable, walkable neighborhoods; a thriving foodie scene with amazing restaurants; an arts scene that will soon include a combination boutique hotel/art gallery; and a city landscape that includes numerous parks and locations for outdoor physical activities – hiking, biking, kayaking, paddle boarding, among others.

Richmond’s downtown is reminiscent of many American cities: sleek, modern skyscrapers and office buildings. But the unique thing that sets Richmond apart is how the city has embraced the natural landscape of the James River that flows through downtown.

The James River Park System, a unique part of Richmond’s Department of Parks, Recreation and Community Facilities, includes over 550 acres of shoreline and islands in the state capital, extending 14 sections from the Huguenot Bridge in the west, beyond the I-95 Bridge in the east.

In addition to the Worlds bike race, the latest bike riding and outdoor recreation achievement in the Richmond area will be the opening of the Virginia Capital Trail, a 52-mile, dedicated, paved pedestrian and bicycle trail connecting Richmond with Williamsburg, Virginia along the scenic Route 5 corridor. The trail is scheduled to open on October 2, 2015 with a ribbon cutting and celebratory events along the trail.

Winding in and out of wooded trails on Belle Island, you can stop and see the swift-moving rapids of the Saint James River, and often catch glimpses of the city’s office buildings while sweating and pedaling. As you bike in and around the islands, wildlife sightings are numerous, including many birds fishing along the river.

As visitors take Richmond for the Worlds bike race, they’ll find a Southern foodie paradise with a thriving restaurant scene that features a wide gamut of food: from newly-updated versions of traditional Southern fare to artisanal bakeries that could easily be found on the streets of San Francisco or NYC’s West Village.

The first dining stop in my recent visit to Richmond was Stella’s – a Richmond legend that has changed locations several times over the years.  A modern-Greek restaurant that was packed with locals, offers sleek, comfortable decor including a communal table.

The menu includes Stella’s famous hummus & tabouli with grilled pita, and the hummus did not disappoint.  From a selection of salads and sandwiches or heartier entrees, I ch 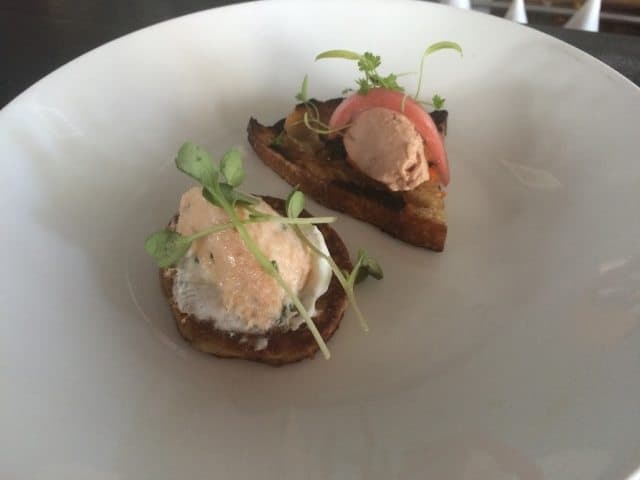 Stella’s recently opened a small grocery store across the street from the restaurant – Stella’s Grocery  – that features many grab-and-go dishes from the restaurant menu as well as staples. It is no coincidence that Stella’s neighbors are quickly discovering the market’s amazing gelato.

While dining at Heritage, a restaurant in the Fan District neighborhood, it was clear why the restaurant was recently named Restaurant of the Year and Chef Joe Sparatta, awarded Chef of the Year in Richmond’s annual restaurant awards.

Before the meal begins, at Heritage, a unique bar menu beckons. Cool Hand Cuc, Main Street Buck, and many other bespoke cocktails await.

For a city the size of Richmond, there’s an impressive array of top-notch restaurants, of course, I could not sample them all.  My tour included L’Opossum (voted Best New Restaurant by Richmond Magazine), breakfast at Perly’s Restaurant & Delicatessen (a modern American restaurant and deli), and Pasture (Chef Jason Alley’s farm-to-table restaurant that updates and reinvents many traditional Southern dishes).

A visit to Richmond would not be complete without Sunday champagne brunch at the Jefferson Hotel. The Jefferson, which kept alligators in marble pools in its lobby until 1948, is one of only 38 hotels in the U.S., Canada, and Mexico to hold both Forbes Five-Star and AAA’s Five Diamond ratings. Brunch is served in the cavernous Rotunda lobby which is ringed by buffets and cooks ready to whip up breakfast/brunch dishes to order while you wait.

In addition to the amazing restaurants, one of the highlights of the trip was a Real Richmond food tour through Richmond’s Church Hill neighborhood. Led by Maureen Egan, a Richmond aficionado and historian, the tour was a great combination of food (small samples at 5 neighborhood restaurants), anecdotes about  Richmond’s history, and insight into Richmond’s burgeoning food scene.

Here are some other Richmond dining highlights: The Dog & Pig show shrimp and grits and grilled cheese with bacon–to die for,

Dutch & Company a new American restaurant that serves back door hot dogs out of the kitchen every Saturday, at noon, WPA Bakery tasty desserts and sweet treats Sub Rosa Bakery artisanal wood-fired bakery that mills their own locally sourced flour for breads and pastries, from sweet to savory, Chocolates by Kelly , locally made chocolates, candies, and gelato.

A summary of Richmond’s food scene would not be complete without mention of the annual Fire Flour and Fork festival – the next one is October 28 through November 1, 2015. The festival highlights the best restaurants and chefs, old and new, of Richmond. Activities include cooking demonstrations, food tours, guest chefs, cookbook signings, and much more.

Richmond is divided into five distinct districts: Downtown, East End, North Side, Southside, and West End, and each district is further subdivided into several neighborhoods. Like most cities, homes are built close together, often in row houses, creating dense, but great walkable neighborhoods.

Some of the notable neighborhoods include: Jackson Ward, Richmond’s traditional African-American neighborhood,  once called the “Harlem of the South.”

At the center of Jackson Ward, there is now a statue of Richmond native Bill “Bojangles” Robinson, a renowned tap dancer, and actor, and one of the most highly-paid African American entertainer in the first half of the twentieth century.

The Fan District in Richmond’s West End is often mentioned by visitors to the city. The district, with tree-lined avenues, homes, and numerous local restaurants and businesses, borders nearby Carytown. Walking the neighborhood’s streets, it’s impossible to miss the unique ambiance.

Development of the Fan district was strongly influenced by the City Beautiful movement of the late 19th century and includes Monument Avenue, a boulevard featuring enormous equine statuary of Civil War Confederate generals and a statue of tennis icon Arthur Ashe.

Find out more about Richmond VA.  This trip was sponsored by the tourism board but the opinions are the author’s own. 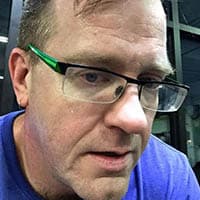 Jeff Rutherford is a voracious reader, quilter, podcaster, and CrossFit enthusiast, who has worked in the digital marketing industry for 20+ years. He lives in Western Massachusetts with his two sons.