Nagorno-Karabakh, Heart of the South Caucasus

Lying at the crossroads between East and West, Nagorno-Karabakh is a self-proclaimed landlocked nation located at the heart of the South Caucasus. The Nagorno-Karabakh Republic, an independent but still unrecognized state, governs most of the region.

Locally, the area is known as ‘Artsakh’; the original name given to the ancient Armenian Kingdom’s 10th province.

Some scholars suggest that Armenian settlements in the area date as far back as the 7th century BC, others suggest it goes back to the 4th or 3rd century BC.

Nagorno-Karabakh is a haven for nature and culture lovers. The region’s landscapes comprise many beautiful mountains and dense forests.

The name Nagorno-Karabakh itself is a reflection of the landscape, as the prefix ‘Nagorno’ means highland, and ‘Karabakh’ black garden. On average, the region is about 1100 meters above sea level.

The stunning natural sceneries include steppes in the lowlands, thick forests of hornbeam, oak, and beech with alpine meadows and birchwood the higher up you go. There are also many mineral springs around the area.

The valleys are particularly beautiful as they are home to many orchards, vineyards, and mulberry groves used for silkworm production. In this off-the-beaten-path destination, nature remains untouched.

Nagorno-Karabakh is also a cultural gem; a sort of open-air museum for historical monuments and architectural artifacts. As most Armenians living there are practicing Christians following the Armenian Apostolic Church, the architectural landscape comprises numerous ecclesiastical structures including churches, chapels, cathedrals, and monasteries.

These structures often use limestone as the primary building material and are covered with the local volcanic tuff stone.

There is also a small minority following the Orthodox and Evangelical Christian Churches, however, their presence is less visible in the region’s cultural heritage.

Architectural beauty is also expressed in ancient fortresses, castles, civil architecture, and the very famous khachkars.
Khachkars are outdoor memorial steles carved in stone that feature a cross in the middle, and other motifs including rosettes, botanical patterns, eternity symbols, animals, saints, solar discs, and more.

Dating back to Middle Ages, they are unique to Armenian culture and have been listed as ‘Intangible Cultural Heritage of Humanity’ by UNESCO.

Other stunning artworks from the same period include some of the most beautiful illuminated manuscripts and mural paintings displaying local religious life. Local art is often tied to the region’s primary religious institution; namely the Armenian Apostolic Church.

Kharabakhtsi hospitality is also worth a mention. Kharabakhtsis are very welcoming people. Even though many are poor, they will go out of their way to accommodate their guests. It is not uncommon to get invited to a local’s house for lunch or dinner. They will insist that you eat, and eat a lot. They might even offer to host you, and they mean it!

experience. Winters are very cold and are to be avoided.

Nagorno-Karabakh can only be reached via Armenia. There are many flights connecting Zvartnots International Airport located in Yerevan, Armenia’s capital, to the world.

From Yerevan, it is a four-hour drive to Nagorno-Karabakh’s capital, Stepanakert, via the Lachin Corridor; a mountain pass near a small city of the same name.

To get there from Yerevan, you have the option of renting your own car, preferably with a driver, taking a taxi, or joining an organized tour.

Huyr Service is a good place to look at, both for organized tours and car rentals. There is also the option of taking the relatively cheap daily bus connecting both cities. However, be prepared for a longer and not so comfortable journey if traveling by bus.

To get around Nagorno-Karabakh, if you haven’t joined a tour group or rented your own car, there are taxis and microbuses. Taxis are widely available in the main cities. Microbuses, locally known as marshrutkas, are available too. However, they do not run that often. In cities, the best way to go around is by foot as most cities are quite safe and relatively small.

With religion playing such an important role in people’s daily life, many of Nagorno-Karabakh’s sights of interest revolve around religious sights.

Gandzasar Monastery: By far one of the most impressive monasteries in the region, Gandzasar is a stunning masterpiece in terms of ancient Armenian architecture. Dating back to the 13th century, the monastery is situated on top of a beautiful hill.

The surrounding natural landscapes and the beauty of the monastery itself make it the most popular place to visit in Nagorno-Karabakh. If you are lucky enough to hear someone play the duduk, the traditional Armenian flute, you will be mesmerized by hearing the sound of the music resonates across mountains.

Amaras Monastery: In the early medieval era, right when Armenian civilization and culture flourished in the region, the first Armenian school opened its doors in modern-day Nagorno-Karabakh. Dating back to the fifth century, this school was opened at the Amaras Monastery by St. Mesrop Mashtots; the one and only genius behind the invention of the Armenian alphabet.

But this monastery is also worth noting for another reason; it was founded by St. Gregory The Illuminator, the religious leader who made Armenia become the first Christian state in the word in 301 AD. The monastery, which is still an active monastery today, is worth a visit for its historical and religious significance.

Dadivank: Located in the Mardakert district, the remarkable 13th-century Dadivank is the most important monastic complex in size in Nagorno-Karabakh, revealing impressive geometric rigor. Without a doubt, it is one of the most complete and best-preserved monasteries in the Caucasus region.

The complex is home to around twenty majestic structures that can be divided into four categories; the ecclesiastical, defensive, residential, and ancillary. In the center lies the beautiful Cathedral of the Holy Virgin.

Cities of Interest in Nagorno-Karabakh

Shushi: A trip to Nagorno-Karabakh would not be complete without a visit to Shushi, the historical capital which was once also a cultural capital in the Caucasus. After the Nagorno-Karabakh war, the city was left in ruins and is still in the process of recovery.

Travelers can not only get a better picture of the devastating effects of war while walking around the fortified city, they can also see traditional and historical Armenian churches and houses, cultural monuments, and a few mosques that no longer operate. The Ghazanchetsots Cathedral is also located in Shushi.

Stepanakert is the capital of Nagorno-Karabakh and is often chosen as the base for exploring the area. It has nice hotels and restaurants.

A stroll around the small city will take you around parks, statues and memorials, government buildings and universities.

A must-see is the famous ‘We Are Our Mountains’ memorial featuring an old local couple, also referred to as ‘Grandma and Grandpa’.

Taking advantage of the region’s rugged and densely forested terrains, many impressive castles and fortresses were built on hardly accessible rocks and on mountain tips.

The Askeran Fortress is a masterpiece of fortification art with its intricate system of recruiting centers, camps, watchtowers, and beacons. Built in the middle ages, the fortification’s majestic walls are two meters thick and nine meters tall.

The fortress has played an important role in protecting the area against Tatar thugs, and later on, Turkish aggressors. The fortress is well kept to the delight of antiquity and history fans.

Agdam: Officially a no man’s land, Agdam is an unusual place to visit. Once a hectic city, it is now a deserted ghost town in ruins. Also known as the “Hiroshima of Azerbaijan”, Agdam is under Armenian control.

As it is located very close to the border with Azerbaijan, traveling there is not advised. But for those willing to take the risk, it is possible to hire a taxi to take you there.

There is no guarantee that you will be able to reach the city as the military could stop you close to Agdam and kindly ask you to head back to cities that are open to visitors. However, if you make it there, you will see the remnants of numerous old houses and a mosque. Let your imagination run free and imagine the hustle and bustle of the city that once stood there.

Stepanakert is home to a couple of museums that are worth a visit.

• Museum of Fallen Soldiers: Museum in honor of soldiers who died during the war with Azerbaijan in 1990-94. The museum’s collection includes weaponry, photographs, and more memorabilia.

Janapar Trail: This is a fascinating marked trail which starts in Hadrut and is divided into a couple of day hikes heading North.

It takes approximately nine days to two weeks to walk from one end of the trail to the other. There are some alternative side trails that can be taken as well.

These hikes will take you through stunning ancient monasteries, villages, hot springs, forests, valleys, and fortresses. At night, you have the option of staying with a local family or camping out. It is certainly an excellent and fun way to experience Nagorno-Karabakh!

Hotel Armenia: Located on Renaissance Square in downtown Stepanakert, right by the Parliament and a number of good restaurants, Hotel Armenia is a modern four-star hotel. It has 55 beautiful rooms to accommodate guests, a stunning bar and restaurant, and receptionists who speak fluent English.

Valex Garden Hotel: Also located in the center of Stepanakert, Valex Garden Hotel is a luxury hotel with 57 comfortable and stylish rooms. The hotel has an excellent restaurant, a fitness club, a tennis court, a spa, and a swimming pool that guests are free to use.

There isn’t one specific restaurant that is a must-try as such, but there are local specialties which certainly are. These include:

It is advised to drink bottled water in cities. While hiking, it is also reasonably safe to drink from mountain streams as long as the water is not running downstream from a bigger city.

For medical emergencies, there are only modest clinics in the region. The closest hospitals are in Yerevan. It is advised to pack a first aid kit and bring your medicine with you.

Nagorno-Karabakh is relatively safe for travelers. Only border areas should be avoided as periodic shootings take place.

Most transactions are done using the Armenian dram (AMD). Occasionally, some hotels accept US dollars and Russian rubles. 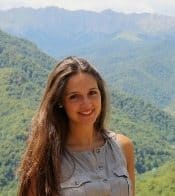 Sarine Arslanian is a researcher, freelance writer, amateur photographer and documentary filmmaker with a strong interest in socio-economic challenges and development, arts, and culture. She graduated from the University of Cambridge with an MPhil in Development Studies.