Clowning Around at Park City, Utah 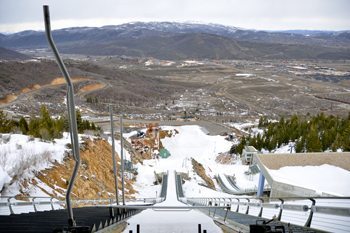 Chasing spring powder on the western edge of the Rocky Mountains in Utah, teetering on the desert’s edge, can be a white-knuckle experience. The heart pumps wildly at 10,000 feet, and deep drifts leave you exasperated.

The muffled booms of explosives echo in the distance. Myth or not, all it takes is a high-pitched yodel to loosen the silver snow and start a tumbling landslide.

The bumps and bruises on the Thayne’s Canyon trail at Park City Mountain Resort (PCMR) is not the mellow run I was anticipating. In my wake are gigantic mountain bowls covered with loose layers that shiver and shake.

A powderhound wearing a vintage neon one-piece ski suit, so bright that it hurts my sunglasses, stops alongside me.

“Do you mind if I follow you down the mountain? You’re dressed for success!” I ask.

“Sure, but I’m not really a great skier. I just feel like one when I dress retro,” she smiles.

I’ve been invited to the Wasatch Mountain Range for three days of spring skiing punctuated by dining and drinking – yes, all necessarily in that order.
Those in the know realize that the Beehive state rejoices with 500 inches of “The Greatest Snow on Earth” – a superlative based in science. To put that into perspective, that’s more than a foot of snow every five days with an average of 6.7 feet falling in April alone.

The precipitation is special because it’s bone-dry, like the desert.

In fact, meteorologists use a snow-to-liquid ratio measurement to compare. For example, it takes up to 35 inches of snow to yield one inch of water in Utah. It takes only eight inches to replenish that same amount in California. Have you ever heard the term, Sierra cement? Now, you know why.

This northeastern corner of Utah plays host to seven surrounding world-class ski resorts (or rather six because of a recent merger): Snowbird, Alta, Brighton, Solitude, Deer Valley, the Canyons and PCMR. Canyons and PCMR merged in September 2014. Only a single ridgeline separates the geographically cozy bedfellows.

This is Utah and the notion of marrying all seven under one name isn’t such a far-fetched idea. The vision, known as ONE Wasatch, has been percolating for years.
Planners envision a playground similar in size and scope with a European-style ski experience. The goal is simple: more time on the snow and less on the road.

Just by adding a few new chairlifts to Little and Big Cottonwood Canyons and removing a rope barrier between PCMR and Deer Valley, the area could explode into 18,000 skiable acres of terrain, making it the largest on the continent.

“Connecting seven of Utah’s finest ski resorts while preserving both our water quality and a pristine backcountry experience is not an impossible task. With thoughtful planning and sincere cooperation, ONE Wasatch would add significantly to what is already one of the greatest ski destinations in the world,” said Ski Utah President & CEO, Nathan Rafferty. (Ski Utah is the primary promoter of the future of skiing in Utah.)

While most agree that it would be the ultimate tourism product for the state, the idea isn’t without its share of critics. Many worry about the environmental impact while others are concerned about public access to adjacent lands maintained by the US Forest Service. The one thing that everyone agrees on is positive stewardship is required to preserve 220 square miles of pristine alpine landscape.

As I chase my fuchsia Supergirl down the mountain, we pass colorful pranksters sporting goofier outfits than hers. Someone is wrapped in a sexy t-shirt, another a feathered boa and the wind-burned boarder has a humorous sombrero gaffed to his helmet. All are shredding so perfectly that it’s as if they just came home from winning gold in Sochi rather than a performance under a circus tent. 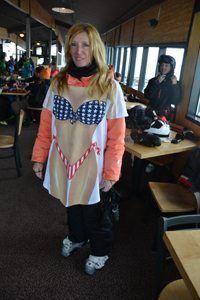 Of course, today is April Fools’ Day! Better known as Clown Day, April 1st has been an unofficial tradition in this old silver mining town since the mid-1970s. The funny thing is, with or without clowns, there’s no shortage of entertainment here.

Any bluebird day (spring or not), is ideal for hours of snow-covered hedonism. Today, the vibe in Park City is a mischievous mix of sunshine and flurries. The mercury is rising and there are plenty of skiers with pseudonyms like BoBo and Groucho.

Clown Day started in 1974 as a fundraiser with what the local newspaper described then as: “49 clowns, four hobos, a shah and a ringmaster parading down Main Street.” The crazy troupe tooted horns, laughed, howled and juggled rubber chickens. Onlookers pointed and took photos.

They made their way to the nearest PCMR ski lift where resort staff got in on the action by giving away free lift tickets and donating half of the $10 entry fee to a local ski team. For the next decade, excitement over the town’s favorite annual tradition exploded.

Thousands from all over the country descended on Park City to cavort and frolic. But, by the early 1980s Clown Day was awash with skiers pulling offensive pranks, getting drunk and singing obnoxious songs. The revelry escalated out of hand when local high school students started coming down with what was commonly referred to as “Clown Flu.”

They would skip classes to spend the day on the slopes. Not everyone loves a clown and in 1983 a crackdown ended the unadulterated day of fun. For the next 10 years anyone caught wearing a clown costume, on any day, had their ski pass revoked. A clause was written into the pass forewarning would-be merrymakers of the consequences.

2014 marked the 40th anniversary of Clown Day and I think it’s safe to say that it has resurfaced barely a shell of its former self. Great imagination and creativity still goes into the costumes but it’s nothing like it was during the heyday.

Gorilla suits, Elvis impersonators and circus acts are kept to a minimum as to not attract too much publicity and risk a riot.

I’m doing what I can to keep pace with my pink apparition as she soars down a short, windy chute called C.B. Run. In 2002, all eyes were glued to this particular trail when Bode Miller won silver in the men’s giant slalom during the XIX Winter Olympics.

PCMR also played host to several snowboarding competitions including one that made US Olympic gold medalist (and Vermonter) Kelly Clark, a household name in the women’s half-pipe competition.

For a scrapbook of skiing memorabilia and history, visit the Alf Engen Ski Museum and George Eccles Winter Games Museum. These cool facilities include interactive exhibits and virtual reality dioramas.

I found it fascinating to read about Alf Englen, the person credited with skiing powder for the first time. I was also thrilled to feel the thrill of an alpine competition and the power of an avalanche through a simulated ride.

Admission is free; should you want to try something more adventurous, $185 will get you the experience of a lifetime aboard the Comet Bobsled. You and an instructor will hit speeds of over 80 mph, absorbing the same G-forces as do Olympians plummeting down the curvy, ice tunnel.

Long before Park City became a world-class mountain resort, it was famous as a silver mining town. In 1869, soldier prospectors living in Parley’s Park City (original name of Park City) found an outcropping of glittering bluish-gray rock on Bonanza Flat.

The rock turned out to be a large vein of silver and lead sulfide called galena. The prized precious metal sparked large crowds of settlers to the boomtown for the next 100 years. All went bust in the 1950s when the price of silver plummeted.

“Miners should be credited with skiing here before everyone else,” said Park City Mountain Resort Communications Manager, Andy Miller. “In the early days of mining there were 1000 miles of tunnels snaking underneath us. Miners strapped hickory barrel staves to their feet to navigate back down from the summit.”

Miller is a most valuable PCMR employee, a polished skier who can recite history like a town historian. Sitting alongside him on his favorite lift, we’re launched high overhead trails with names that pay homage to the miners’ pioneering spirit: Dynamite, Prospector, Mel’s Run and Detonator, for example.

When mining ended, United Park City Mines resourcefully turned to the sport of skiing to revitalize the economy. They applied for a federal recreation loan to help develop the area, but the application got lost in a politician’s desk drawer. In August 1962, President Kennedy, running for re-election, invited a number of Utah publishers to Washington for a briefing.

During the luncheon, Kennedy learned about Park City’s struggles and quickly instructed his press secretary, Peter Salinger, to green-light $1.2 million in funding. Treasure Mountains Resort (now PCMR) opened a year later and the resort industry was born. PCMR celebrated their golden anniversary in 2013-2014 with celebratory activities and festivals. Miller interviewed dozens of ski and mining legends that spoke nostalgically for the days when a lift ticket cost a mere $3.50.

For more on the mining days of old, I visit Main Street for a tour of the Park City Museum. I scoot inside what used to be dubbed the skier subway, a slow-moving mine car turned into a subterranean shuttle for access to the top of Treasure Mountains (now PCMR). This was what was used before lifts were widely available.

I hibernate like a grizzly bear at an artisan development community called the Silver Star Resort found at the base of PCMR. My cave is a four-bedroom townhouse (Building 3000) accented with rough-hewn timbers, Native American art, and several fireplaces.

My friends are gracious enough to let me take the master suite full of amenities. From our building, there’s a short 3-minute shuffle to the Silver Star chairlift, a private ski-in and ski-out entrance to PCMR. A delicious piping-hot breakfast of huevos rancheros is served up at the rustic Silver Star cafe conveniently next to the lift.

I highly recommend returning for the “Park City Limits” bluegrass and dinner show with a voracious appetite. You might even be tempted to share slices of your hearth-fired pizza with the resort’s beloved ambassadors: English and French bulldogs, Vidalia and Talluluah.

The friendly pups greet guests with sloppy kisses at the front door of the Ski and Sports shop. Affectionately dubbed Team Onion – no, they do not mush or pull a sled – rather, they are part of a wildly successful marketing campaign of ski apparel and accessories. Their faces emblazed on t-shirts, mugs and bumper stickers are popular with returning customers.

If size matters, and it does, PCMR just got a whole lot bigger. Ski firm juggernaut, Vail Resorts, purchased the resort for $182.5 million in September 2014 with plans to christen it the biggest skiable terrain park in the country when they complete an eight-passenger, two-way, high-speed gondola to neighboring Canyons Resort. Another $50 million injection goes towards amplifying lifts, restaurants and lodging. You can already purchase the “EPICDAY” ski pass ($20 cheaper online) and gain riding privileges at both resorts.

When you ski PCMR this spring, be sure to harness your inner-clown and pack a red nose and face paint. Forget the barrel staves that the miners wore and, instead, rent a pair at the Silver Star Ski and Sport shop and stay close to the slopes at the Silver Star resort. If you need a rest, visit the history museum on Main Street or the Alf Englen Museum at the Utah Olympic Park.

www.pilotgirlproductions.com
If this story has inspired you to travel, why not check out the prices to get there and make it happen? Search airfares, hotels, and rental cars here. Thanks!