In 2013 Dione was invited by Jon Bonfiglio, founder of The Clipperton Project (TCP) to travel to Mexico and be part of a collective of inspiring individuals committed to social change. The core values of the organization: explore, engage, empower and educate encouraged her to join the group  the journey that involved rowing together in four cayukos (canoes) down just over 200 kilometres of the Usumacinta river, from the border of Mexico and Guatemala to the Gulf of Tabasco. The four weeks involved various activities including town presentations, school visits and conversations with locals. Below is a story about one of the places they visited.

Palizada is not a destination easily found on the map. In fact it doesn’t show up in any of the guide books and even the omniscient Google earth seems to be at a loss to pinpoint this tiny town.

This was much to the chagrin of my mother who was unwilling to admit that for almost a month she would have no idea where in Mexico her wandering daughter was travelling. Allow me to fill in the gaps.

Palizada is the 2014 Pueblo Magico (literally translating to the magic city) which in all honesty, makes perfect sense as to why it wouldn’t show up on any map. “It can disappear whenever it feels like,” I snickered to my parents when I found a tiny sliver of reception. “It’s a city that doesn’t want to be found.”

Far away in Auckland, New Zealand they were not impressed – both with my jokes and the failing of modern technology.

However, if you do travel about three hours north-east from Villahermosa (the capital and largest city of Tabasco) you will find Palizada. It does indeed exist. And furthermore, if you pride yourself on being a traveller and not a tourist – then this municipality in the south-west corner of the state of Campeche is a hidden gem.

The layout: Small is sexy

I daydreamed my way around the whole town (let’s be honest now with a population of under 10,000 it is more of a town than a city) in less than two hours.

The boardwalk was one of my favorite haunts dotted with plenty of seating options to watch the world wag by. At sunset novios (lovers) strolled by beneath striking pinks and orange skies, flocks of herons head to the foothills to roost and there was invariably a concert or some event that called people outdoors to enjoy the views along the riverfront.

But beyond the boardwalk is worth exploring as well. Sure, orange and purple walls are juxtaposed with somewhat garish advertising, but for the most part the place exudes an old world charm.

The houses are low and proudly display tiles all the way from Marseilles which were (according to locals) tokens of trade for hardwood that had become popular in Europe during the 1860s.

Mostly populated by triciclos (three wheelers) the tranquillity is relatively undisturbed punctured only by the occasional blasting of American pop tunes by young drivers but these too quickly subside. The official main square Parque Benito Juarez was a tad formal for my liking but it did offer free wifi (good luck trying to get reception as it seems to be manually operated according to the whims of some invisible modem operator) but nevertheless a lovely spot after my highly strenuous walk around haphazard streets.

The important bit. Forget overpriced restaurants with napkins and cutlery, the best place to eat in Palizada is at the local mercado (market place).

Quesadillas bursting with flavor with local quesos (cheese) empanadas, piping hot and yet incomplete without the salsa verde and of course, the staple of Mexican cuisine, tacos.\

The fact I saw my tortillas being made reminded me that here in this remote little town, home-cooking was not only accessible but affordable and readily available.

Almost every taqueria was family operated with young women serving customers while mothers and grandmothers smiled as their floury hands prepared countless balls of dough to be pressed and served.

Coke seemed to be the fashion, a pity as the jugos and aguas are delicious (and obviously far more nutritious).

Begin with a melon and banana mixture for breakfast, perhaps a mango juice to accompany lunch, and then to finish the day a locally made ice-cream. That would be my recommendation. My favorite was a smooth and creamy concoction made from Guanabana, a local fruit. The other delicious alternative was to have a locally made chocolate caliente (hot chocolate) prepared fresh, unstrained and with cacao grains staining my lips as I gulped the steaming milk. An experience to be cherished.

Aside from stuffing my face and taking vague walks around town there were a number of other reasons to explore the area beyond its defined parameters. A cuyo (pre-hispanic mound) almost ten metres high is hidden away on the outskirts displaying evidence of Mayan presence and activity and a testimony to history of the Mayan culture.

For any anthropologist, cultural researcher and artist (like myself) it’s definitely worth a trip. There were shards of pottery and other fragments surrounding the cuyo and many of the originals can be seen in the nearby Jonuta museum (30 minutes away).

There is also a crocodile farm 12km away in the city of Santa Isabel where it is possible to marvel at these scaly creatures. Massive monsters it is a fabulous opportunity to get up dangerously close and relive all your favorite horror stories of crocodile attacks. Perhaps one for the lads?

Another day trip is to venture into the lagoons where the Manites (supposedly) frolic yet in my case which was an adventure involving a ten hour day with high temperatures, no Manite spotting (none above water at least) and fishermen who decided that capturing lunch was a far more important priority than getting back to Palizada. There isn’t much you can do when a fisherman is in charge, except wait. And wait. And wait. 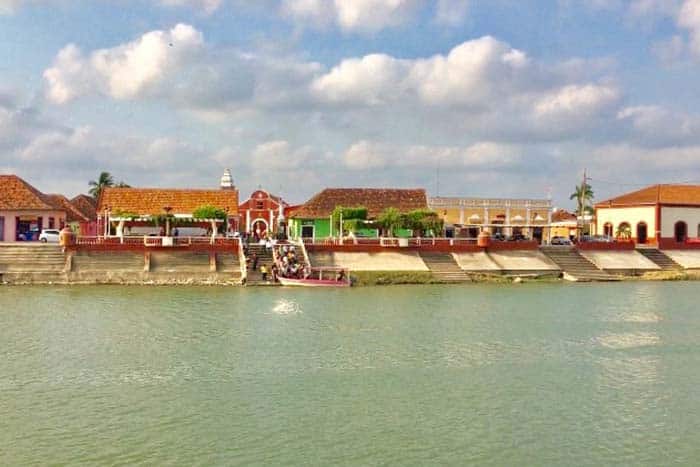 And finally, the least touristy destination is actually a good 30 minutes away from the city and on the banks of the Usumacinta River. Here at Santa Lucia I found two of the most generous hosts who opened their hearts and home to expeditionaries like myself and colleagues from The Clipperton Project.

Juan Carlos and his wife Johanna are committed to revitalizing the land that was once his grandfathers. Using perma terra (based on the practice of perma culture) they have created a site where every effort is made to consciously work with the land and the local communities to re-fertilize the soil, create new employment opportunities and engage in a level of farming and livestock management that adheres to the tenets of caring for the land, its people and each other. For anyone interested in perma terra and its growing expansion in Mexico the ranch is a must-see place to visit and became the base for our group’s Usumacinta expedition in May 2014.

Aside from the alliteration (which was entirely unintentional) Palizada is a rather poetic and picturesque place to visit. It is also a fantastic base to explore the nearby towns and revel in the unadulterated beauty of the landscape. It probably won’t be making the tope ten cities to visit in Mexico anytime soon but that’s why I rather like it.

It has charm and character that you will be hard pressed to find elsewhere. When you’re in Palizada you’re so obviously a guest that the locals go out of their way to make you welcome. If I’m in that part of the country again I definitely wouldn’t mind visit the magical city once more – and luckily next time I won’t even need a map!
Love Mexico?  Get our Mexico Plane Reader with dozens of stories to go on your Kindle, iPad or Nook.

Dione Joseph is a New Zealand freelance theatre director and writer with a performance and academic background in the arts. Over the past six years she has directed a range of productions, and published extensively as theatre critic and arts journalist. She travels internationally to work alongside other artists and is engaged in a number of collaborative community based projects that are developed to enable local voices to be heard globally – in their own words, on their own terms. Her travel writing reflects an ongoing commitment to go beyond invisible boundaries and a passion to explore and engage with our changing landscape. For more information please visit www.dionejoseph.com