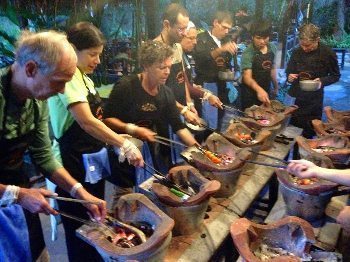 Veg Voyages is a Texas-based tour company that takes vegetarian-friendly explorers through the wilds of Southeast Asia.

The adventure leaders are RK Singh and Zac Lovas. Both are animal-lovers, and both have lived and worked in Southeast Asia. Singh is a native of India, having worked in the tourism industry for a number of years.

24 years ago he met Zac Lovas, an American while coordinating on a film project in India. The two became friends and joined forces 14 years later to show the rest of the world the wonders and little-known treasures (like the food) of everyday life in India, Malaysia, Laos, Thailand, and Indonesia.

Upon arrival, guests are already thrown into acquainting themselves with the region. They travel by bike, train, bus and other means of public transportation. Clients are also guided by locals in addition to the official tour guides, to get a gritty taste of life in the subcontinent.

Why it is Unique

Veg Voyages, for one thing, includes vegetarian-only meals (and plenty of vegan meals, as well) as they are against the cruelty and exploitation of animals.

Therefore, the tour does not feature safaris or zoos they believe are mistreating the resident animals. This is a big reason why 4-year vegan Tracy Scott from Seattle, WA was drawn to them.

“I was thrilled to find a company that supported – not only not exploiting animals on excursions but instead supporting legitimate rescue, rehab & sanctuaries, for all animals, including humans.”

Duane Nichols from West Virginia, who is not vegetarian, was interested in the tours mainly to learn about the cultures of Southeast Asia. He speaks of one “Voyage” to Laos, in particular. “We visited a bear refuge that takes in and cares for injured bears native to the land in an effort to rehabilitate them. I really liked that. We got to interact with the Sun and Moon bears on this trip.”

Another highlight of the Laos tour brings folks to the Plain of Jars. Duane describes seeing “a land of craters with bombs still embedded in them from the Vietnam War and we met locals with missing limbs as a result of the War.”

Fellow West Virginian, Bill Reger-Nash, who is a professor at the School of Public Health at West Virginia University, expressed feeling the “loving acceptance of the Laotian people even though the U.S. committed the heinous bombing of Laos during the Vietnam War.”

A final visit to the prosthetics factory is the icing on this historical cake.

And don’t think you won’t be getting your hands dirty! Veg Voyages requires audience participation. Part of the travel includes buying and preparing dinner for local orphanages and enjoying the meals with the orphans, themselves. According to Duane, this was a truly memorable experience.

Also included are contributing to the Disabled Women’s Development Centre and educational programs. Daily language and yoga classes are on the itinerary for every tour as well as participating in spiritual ceremonies of the corresponding region.

The Veg Vision, is essentially, exposure to a different (and humanitarian) way of living. The creators of Veg Voyages strive to have people taste not only delicious, healthy food, but what the daily life of the Asian Southeast is really like.

They strongly believe that to experience a culture to the fullest, local cuisine is a great start. The accommodations often consist of villagers’ homes as well as historic mansions.

They want visitors to see these countries as they are, and encourage them to help their international brothers and sisters. An emphasis on community care is shown through the trips to and active participation in war-mongered ruins, disability clinics, schools, orphanages, animal sanctuaries and many more facilities designed to help the less fortunate.

Jeff Morrill from Milton, MA alludes “Zac and Yusi asked all the hard questions for us.” The guides do their best to make the tours as personalized as possible, so groups are quite small. Also, the destinations are those only well-known by the creators where they have actually lived, as to create a more intimate experience.

One thing everyone can agree on: the food is to die for! Bostonian, Hal Dinerman (who became a vegetarian mostly for health reasons) says “I love Asian food. Southeast Asia is known for their mostly vegetarian-friendly food. It was delicious!” Jeff from Milton adds “Zac and Yusi made sure we never left a table hungry. It took a lot of discipline not to overeat because it was so good!”

In fact, many vegetarians who embark on these tours are astonished at how much variety they can experience while on the road.

One frequent problem vegetarians and vegans both run into while traveling is the lack of animal-friendly food they are limited to. As Jeff put it, “We are used to subsistence eating when traveling internationally because it is a meat world.”

Veg Voyages features unique dishes only found in the villages of the region. A crowd favorite is a banana-leaf meal of Southern India.

This consists of a fresh banana leaf holding a mound of rice, locally-found vegetables, dhal (a mixture of dried and split lentils, peas or beans), rasam (a soup made from a powder of ground-up spices), papad (a thin, crispy dough made from special flour and cooked with dry heat) and pickles.

The creators of the tour love food so much, they even have a trip dedicated to Thailand’s annual vegetarian festival! Not only does this specialized tour feature a variety of Thai vegan cooking classes (from local salads and desserts to full-course meals), but also vegan barbecues and a visit to a vegan monastery. That’s right, this tour 100% vegan-friendly.

Thailand is big on noodles and a delicacy of theirs is a vegan noodle soup that is (like most other Thai dishes) lightly cooked and complemented with local spices Duane Nichols photo. mashed up into a paste before mixing.

Planning a trip with Veg Voyages is fairly simple. Guests start by visiting their website and filling out a reservation form. Within 72 hours, a confirmation email is sent with instructions on how to pay the deposit.

Once the deposit has been paid, customers are sent a welcome package, suggesting what to pack (and what not to pack), what to wear, weather and terrain conditions, currency and banking details and any vaccinations that may be wise to receive before departure.

The final payment is due 75 days before departure date, so make sure to book well in advance. Not to mention some of the tours can last up to three weeks (emphasis on planning ahead!)

What People Are Saying About the Veg Voyages

Veg Voyages delivers exactly what it promises. Many explorers sign up for the experience of a lifetime, wanting to see a different side of Asia than what has been presented to them. Even if one is not vegan or vegetarian, all have said it was a rewarding experience with plenty of tasty food, regardless of one’s dietary restrictions.

Travelers usually seem to know what they’re getting into and are certainly not disappointed. Some are attracted because of the vegan allure (and Asian vegetarian food is already known for its deliciousness), some for the cultural eye-openers, and some simply because they are die-hard animal-lovers and fully support the underlying message of Veg Voyages which is: be kind to one another (even the non-humans).

Some guests have even become friends out of common interests.

“I really enjoyed getting to know the other people on the trip (16 of us in total). It’s not surprising that we would hit it off with other vegetarians who share many of our values. I’m not an especially extroverted person but the other travelers kept the conversations interesting and we made many new friends. We’re traveling across the country next year to attend a wedding of couple that we met on the trip.”—Jeff from Milton, MA

The only pitfalls to these Adventures that past travelers have expressed is that not enough people know about this company. Guests feel that more guides should be available so a wider audience can be exposed to this jewel of culture in the world. Many of the explorers are repeat-customers and want Veg Voyages to succeed and thrive.

Hal from Boston expressed “There was little to no downtime. There wasn’t a lot of time to take a breather, but that’s not a criticism. We never felt bored.” Clients have also said VegVoyages are not luxury tours, but that, in and of itself is what makes it so unique. They are also surprised at how affordable the tours are, considering they don’t feel as though anything seemed downgraded or cheapened.

The real value is in the cultural (and cuisine) experience. Hal reflects on Voyage to India. “The leaders do a good job of making the tours feel personal and special. We felt very special being welcomed into local’s homes. Everyone was quite friendly. We really got to know the Indian people.”

Jamie Kimmel is an associate at a dental office in Boston. She was an intern with GoNOMAD in 2015 and lives in the Boston area.

iamwiccanhearmeroar.wordpress.com
If this story has inspired you to travel, why not check out the prices to get there and make it happen? Search airfares, hotels, and rental cars here. Thanks!