For this book he took numerous road trips to the five coastal New England states to profile about 75 lobster joints where the impressively clawed crustacean is king and the atmosphere is best described as “dining in the rough.”

An important criterion was whole lobster, either steamed or boiled, although Urban quickly realized that he could not overlook the popular lobster roll. “That said, there are lobster roll alerts throughout the book,” he points out. “One thing I learned while running around for this book is that the lobster roll has dominated the market in the last 15 years. I found that places sell one whole lobster for every three or four lobster rolls.”

Subtitled “A Road Trip Guide to New England’s Best Lobster Joints,” “Lobster Shacks” doubles as a travel and food handbook. Urban relates the history of each shack, describes the atmosphere, menu and cooking methods, and introduces the reader to the men, women and families who dish up these shore dinners.

“The three most important things, to me, when I travel are breakfast, lunch and dinner,” he says. He lives in Old Saybrook, Connecticut, with his wife and four children.

The Friendly Fisherman is housed in a modest, shingled shack on the east side of Route 6 in North Eastham on the way to Provincetown.

What started as a seafood market some 20 years ago has blossomed into a fine little eatery with a shaded picnic area and an adjacent package (liquor) store, in case you want to BYO and partake with lunch or dinner.

Co-owners Janet and Alana Demetri (mother and daughter, respectively) work tirelessly to keep up with the orders for lobsters in the market and at the shack window. The Friendly Fisherman has a long-standing reputation as one of the best places to get fresh fish on the Cape.

They’ve also always had strong connections with many of the local lobstermen, who fish the ocean side of the outer Cape and bring the best of their catches to the Fisherman’s cold-water tanks every day during the busy season from May to October.

The Best Fish in Town

The Friendly Fisherman sprang into being when Janet and her husband, Michael, opened as a fish market in the spring of 1989. They quickly became known for their consistently fresh fish, and tourists and locals alike came to depend on the modest market for their seafood needs.

Lobsters were always part of the mix, with a couple of aquamarine cold water tanks next to and behind the counters and display cases.

A small addition was put on the side of the shack a few years after Friendly Fisherman opened, and the Demetris began cooking up lobsters and deep-fried seafood and servin 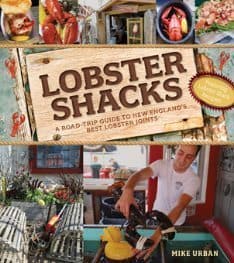 g the fare through a takeout window where diners could pick up their food and enjoy it at the 20 or so picnic tables scattered around the side and the back of the building.

With its tree shade and its colorful lobster buoys and fish nets on the surrounding wooden fence, it’s a pleasant spot to enjoy your repast, set back from the road in a quiet setting. Michael passed away in 2006, and Alana, who had already spent plenty of time working at the shack as a teen, stepped up and joined her mother in running the place.

Have Some Lobster at Friendly Fisherman

The most popular lobster dish at the Friendly Fisherman is the lobster roll, which consists of a generous portion of chilled lobster meat tossed with a bit of mayo served on a leaf of romaine lettuce and tucked into a toasted, split-top bun. It’s simple, yet satisfying and loaded with the good stuff that makes lobster rolls the coveted treat that they are. One summer day a couple of years ago, celebrity chef and television personality Rachael Ray stopped by the Friendly Fisherman on her way back to Boston from Provincetown.

She ordered up a lobster roll and went gaga over it, raving about the roll in her magazine, especially the copious amounts of sweet lobster meat that seemingly buried the lettuce and bun beneath it. (Ray, by the way, is a Cape Cod native who really knows her local seafood.)

Monsters of the Deep 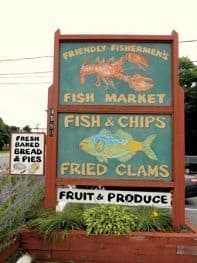 The other big seller in the lobster category is Friendly Fisherman’s shore dinner, which consists of a hardshell lobster (you pick the size), a side of melted butter, an ear of corn, and some of the shack’s homemade coleslaw.

In addition to serving up lobster through the takeout window, Janet says they sell “a ton” of cooked whole lobsters over the seafood market counter to customers (mostly regulars) who take them home to eat. There’s no charge for cooking the lobsters, and the Friendly Fisherman staff will also crack the claws and split the tails for you, if you wish.

The cold-water tanks at Friendly Fisherman occupy a good amount of the floor space in the seafood market and can hold up to 2,000 pounds of lobster; the supply is constantly replenished throughout the day.

All the lobsters are locally caught by two independent lobster boats plying the “back side” (ocean side) of the Cape off Provincetown. In addition, the Demetris employ the services of an independent scuba diver, who goes after big lobsters in deeper water—bugs that often weigh 10 to 15 pounds
or more.

What else Is There?

If lobster doesn’t happen to be your thing, try some of the excellent deep-fried seafood that has helped make the Friendly Fisherman one of the premier, if lesser known, shacks on the Cape. The whole-belly clams are light and sweet and full of fresh-clam flavor.

The sea scallops are also excellent, with firm meat and flavorful breading; they’re sourced locally, so they’re super fresh. And the fillets in the fish-and chips platter come from the fresh daily catches of haddock and cod and other deepwater fish that are filleted throughout the day in the seafood market.

So if you happen to be bound for P-town or the Cape Cod National Seashore for a day at the beach, be sure to stop by the Friendly Fisherman for a bite to eat or some super-fresh fish and shellfish to cook up at home. This place has all the down-home warmth and, yes, friendliness that you should expect to find at any fine lobster shack or seafood emporium on the Cape or anywhere else.