In Colombia Without a Bed: Traveling Cartagena to Isla Baru

We were in Colombia heading to an island off of Cartagena’s coast–Isla Baru–with no idea of where we’d be spending the night. It wasn’t for lack of planning that we hadn’t arranged accommodations; rather to find a place to spend the night on Playa Blanca is similar to the overall vibe of Cartagena—you figure it out in the moment.

Playa Blanca is a stretch of beach on Isla Baru just 20km off the coast of Cartagena. With its sugary, white sand and spectrum of blue water, Playa Blanca lives up to its name and attracts an array of travelers from around the world.

There are two types of travelers that visit Playa Blanca: the first is the day-trippers who sign up for an Islas del Rosario tour and eventually wind up at Isla Baru to enjoy the idyllic scenery.

The day-trippers stay on Playa Blanca for a few hours before being loaded back into small boats and swept away to Cartagena. The second type of traveler to visit Playa Blanca is the overnighter who will land on Isla Baru with no intention of returning to the mainland that day, often joining the day-trippers on the boats with a one-way ticket to the island.

How Strong is your Stomach?

At the Muelle Turistico de la Bodeguita, Cartagena’s old port, we waited alongside other travelers for our boat to arrive and take us to the nearby Islas del Rosario archipelago. The Islas del Rosario consists of 27 coral islands with Isla Baru as the main draw for visitors.

Choosing how to get to Isla Baru proved chaotic as locals hovered by the entrance to the marina waving brochures and clipboards urging us to choose their trip over another’s.

In choosing a tour I’ve learned that you must ask yourself two questions: Whether or not you want to go directly to Playa Blanca and how strong your stomach is?

The tours, which start at around 35,000 Colombian Pesos ($17 USD), usually take a scenic route through the Islas del Rosario often stopping at one of the islands where people can choose between snorkeling and visiting the local aquarium.

After an hour spent watching tropical fish either in a tank or in the ocean—your choice—the tour finally continues on to Playa Blanca.

The next question is how strong your stomach is, which really translates to whether or not you prefer the fast boats known as “lanchas.”

Choosing the lancha can be compared to riding a Six Flags water ride without a harness; imagine the little boat being tossed around effortlessly as waves slap against the side drenching everyone onboard.

Wild, exhilarating and memorable—most people on lanchas seem to arrive at Isla Baru looking like they just swam the distance from Cartagena.

As we waited for our boat I could see the familiar look of excitement mingled with nerves spreading across both our faces.

We had talked about spending the night on Isla Baru for what felt like months but now, sitting at the marina with our backpacks in tow, the reality of not having a place to sleep was starting to hit us.

I could have dug deep into my Spanglish skills and tried to re-negotiate a return trip that same day but truth be told, I had no desire to.

Traveling is ultimately about stepping outside of your comfort zone to see the world in a new light and heading to an island, where we could very possibly spend the night on the sand, was very much outside our comfort zone.

Our room, if you can call it that, is a hut with a palm leaf roof and a single bed draped by mosquito netting.

To access the room we have to dip our sand covered feet in a bucket of water at the bottom of a rickety ladder and climb up to the huts overlooking the turquoise sea.

Finding a place to spend the night was surprisingly easy but choosing a place was tricky. When our lancha pulled up at Playa Blanca we hopped out and immediately started down the beach, past the day-tripping sunbathers and various vendors, in search of where we’d be resting our heads that evening.

Our first stop was a series of hammocks under mosquito netting that offered no privacy or protection from the stray dogs roaming the area, after a pained look from my fiancé that read, “I will not sleep here. Period.” we continued on.

The next spot offered private rooms, sans windows, that looked like a jail cell merged with a cubicle. One look into that dark, damp room with questionable stains on the single sheet and I was the one giving the pained look this time. Like Goldilocks testing out the bear’s three beds, the third-place—Hugo’s Place—proved just right.

Hugo’s Place is a charming and rustic hostel offering beach bungalows and hammocks on the north side of Playa Blanca. When we arrived we quickly learned that only one bungalow remained and three Argentinean girls were hotly debating over whether or not to take it.

One look and I knew we had to have the last bungalow; we whipped out our inner New Yorkers, pulled out 50,000 COP and snagged the room with the same intensity we use to snag a cab during rush hour in Manhattan. The room was ours.“A la Orden” or “At your service.”

Playa Blanca circa 12:00 pm is a very different place than Playa Blanca circa 3:30 pm when tourists sail back to Cartagena. Around noon travelers from around the world flock to the pristine beach turning the island into a veritable United Nations convention while local vendors flock to the tourists selling everything from knock-off Ray-Bans to fresh ceviche.

The vendors range in age from children to elders and hail from the poorer side of Isla Baru, selling what they can to earn a living while offering up that common and friendly Colombian phrase of “a la orden” or at your service.

A local coconut vendor caught my eye as he quietly pushed his cart in our direction. He wore a floppy hat that covered his face and a holster for a large machete hung from his jeans, which were loose on his strong but thin frame.

His skin was taut and darkened from the sun while his hands showed signs of hard work without rest. We ordered coconut cocktails from him and watched as he expertly whipped out the machete and opened the coconuts—a process that clearly had become second nature.

It was sobering to watch this man continue on, without complaint, selling coconuts to travelers for less than $2 USD. Watching him and the other vendors, some weighed down by local produce balanced precariously in bowls on their heads, left me in awe of how friendly, proud and kind these Colombians are despite their situations.

At 3:30 pm the beach transformed completely as locals returned to their homes and tourists to their hotels in Cartagena leaving only sand, sea and serenity in their wake. With Aguilla beers in hand, the waves lightly lapping against the shore and our table nestled on the sand just steps away from our bungalow, I knew we had made the right choice in staying on Isla Baru for longer than a day.

Tomorrow morning we would have the beach to ourselves until about noon when boatloads of tourists would be delivered to the island and the waiting vendors. The now quiet and rustic Playa Blanca would turn into an amusement park of banana boat rides and ice cream carts but at that moment, with a bowl of fresh fruit and the sun painting the Caribbean Sea, we had paradise to ourselves. 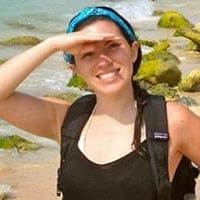 Nikki Vargas is an NYC media professional with a passion for travel writing and photography. Her work has been published on FOOD & WINE’s website as well as the budding travel site, The Hostel Life. She routinely shares her travels, tips and long-term trip planning on her blog, The Pin the Map Project.