Biking Buenos Aires: The City Has a New Fast Lane

In general, big cities, especially big Latin American ones, are unkind to cyclists. My 2008 Argentina Lonely planet says (and I quote) “BA isn’t good a city for cycling.

Traffic is dangerous and hardly respectful towards bicycles: the biggest vehicle wins the right of way, and bikes are low on the totem pole,” it goes on to suggest you join a city bike tour if you want to see the sites on two-wheels.

But as the world rolls its way towards more eco-friendly solutions for traffic and pollution, so has Buenos Aires decided to make cycling and cyclists a priority.

When the city of Buenos Aires started developing (and restoring) bike lanes in 2009 it didn’t go over well with lots of porteños.

Similar to what has happened in many cities across the globe (like New York and Chicago) city drivers complained about all the “hassles” bike lanes would create (cleaner air, more peace and quiet?)

But the city plugged along and pushed through 100 kilometers of bike lanes, with 30 more planned for the upcoming years.

Not only that but BA is a city full of public parks that are totally integrated into city life, many of which bike lanes pass right through, it’s a beautiful thing. Over 60,000 of the city’s little over 2 million inhabitants are registered in the eco-bici program and take 4,200 trips a day by bike.

But biking BA is not just for office workers trying to skip the rush hour or college kids without cars, it’s a great way to see some of the city on the glory of two wheels and with the wind in your hair.

Starting up north in Belgrano, one of the city’s hipster neighborhoods, you can jump on 11 de Septiembre and take it down to where it meets Juramento, a quick jog to the right and then left and you are on Av L.M. Campos where after a quick bicisenda gap, you can hook up with Ave. Libertador.

Libertador is one of BA’s big avenues that leads into the heart of the city – with nice wide lanes that pass many parks and monuments. As you go south the first highlight (and one of the best of this particular tour) is Parque Tres de Febrero. The park is a 400-hectare leafy oasis smack dab in the middle of the city and it makes a great detour for a couple of hours.

All Kinds of Wheels

The park’s bike lanes are filled with all kinds of wheels. Rollerbladers, skateboarders, and even moms running with baby carriages roll past the Museo Sívori, a tiny contemporary art museum, the Paseo del Rosedal, BA’s rose garden designed by Eugenio Carrasco, and the many man-made lakes that dot the park’s landscape.

You can also jump across the road to see the Planetarium and a few other interesting monuments (like the Monumento de los Espanoles and the monument to former president Juan Manuel de Rosas).

Back on Libertador, you move further into the heart of the city, passing Eduardo Catalano’s famous steel flower that opens and closes its giant metallic petals at sunrise and sunset (when it’s working), the Buenos Aires law school and the Chilean Embassy’s sprawling front yard.

You’ll also pass the Architectural museum and the railroad museum, both interesting stops.

When Libertador meets San Martin take the one block jog to the left and then right onto Antartida Ave. to head towards the port. To truly get a good look at the harbor you will have to detour from the bike lanes a little.

Big sailing ships, riverside restaurants, and the beautiful Women’s’ Bridge are all worth a visit and the boardwalk is wide enough for riding.

Once in Puerto Madero, BA’s portside neighborhood, you can take a quick ride down Villaflor street’s wide median (where bike lanes are planned but have yet to be built) and get to the Costanera, the boardwalk that runs alongside BA’s Reserva Ecologica.

This ecological reserve was created naturally by the plants and animals that overtook the riverside marshland throughout the years of this area’s abandonment during the dictatorship.

Little stands all along the riverfront sell beer and choripan (Argentine sausages in hard rolls) and you can detour into the park to enjoy its over 200 species of birds and a view of the city skyline you can get nowhere else.

From the port, you can cross back over onto the mainland on Villaflor to Azopardo and loop around to the left (just follow the signs for the bike lanes, although it can be a little tricky) until you hit Brazil street right by Parque Lezema.

I suggest this route so you can take a turn around the park (take a left on Defensa and another right onto Caseros) and ride up Caseros, which has no bike lane, but two bike shops (in case you are in need of a fix-up) and stop at one of the streets great little outdoor cafes, my particular favorite being Hierbabuena, a juice place with an incredible Sunday brunch.

From there you can explore La Boca, Buenos Aires’ traditional working-class neighborhood — with way fewer bike lanes — and its colorful row houses and art museum, The Proa Fundacion, or head north to San Telmo, the city’s oldest neighborhoods.

An optional detour would be to hit Plaza Dorrego (the corner of Humberto 1 and Defensa street) where street tango dancers pass the hat and there is a cluster of outdoor restaurants where you can sit and enjoy an ice-cold Kilmes.

From Caseros you can go west to Tacuar (another street with plans for bike lanes), and take a right until it meets up with Calvo (that has lanes) taking it to Virrey Cavallos that will take you through San Telmo until Arenales (go left) which becomes Juncal and then French and will eventually lead to Ave Coronel Diaz (another right) that meets up with Libertador. And you are on your way home!

If all that sounds confusing don’t worry, every eco-bici station has bicisenda maps that not only include the routes but also list all the bike shops in the city (an awesome feature). We traveled on borrowed bikes from friends, but getting eco-bici bikes in BA is super easy for tourists – all you need is a copy of your passport to leave with them.

On eco-bici bikes you’re limited to an hour before you have to change bikes at another station, but those are also clearly marked on the map. Check out the eco-bici website for a preview of the map and information about the program or follow this map for the route I just described.

Biking Buenos Aires will give you a very different, street-level perspective of the city – but in a matter of hours instead of the days it would take you to see all these sites on foot.

The tour I described is a long day and easily splits into two if you are the kind of rider who wants to take it easy. I think you’ll find that despite its bad rep, Buenos Aires has become super bike-friendly, hopefully, other big Latino cities will soon follow suit. 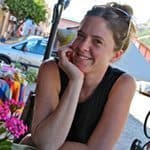 Lydia Carey is a full-time writer and translator living in Mexico City. Her work has been published Luxury Latin America and in Mexico’s English-language newspaper, The News and the New World Review. She writes a blog about life in Mexico City called Mexico City Streets.