Granada, Spain: Much Moor than the Palace

Though small in comparison with other major Andalucian cities, Granada, Spain punches well above its weight when it comes to the quantity and quality of its historical monuments, including the Alhambra Palace, the very jewel in Andalucia’s crown.

Granada boasts a large student population who contribute nicely to the local bar and nightclub scene. What is more, when the big city heat becomes too much to bear, the pistes of the Sierra Nevada mountain range are just a short drive away. Oh, and did I mention that tapas are thrown into the mix free of charge too?

The ghosts of Al Andalus are there for all to see in Granada’s old town, where the City’s Moorish past comes alive in the city’s teterias (tea rooms) and along the windy streets of the Alcaiceria, the former silk market.

The old Moorish town is a must-visit attraction, however, no single feature in all of Andalucia is more representative of Islamic Spain and the City’s glorious past, than Alhambra and its surrounding gardens.

Although the outer gardens can be visited at any time, access to the Generalife gardens and the Palaces themselves is on a ticket-only basis. To guarantee entry to the Palace, it is advised to purchase the tickets in advance from the official website.

Also of note is Granada’s Cathedral which is the second-largest Roman Catholic cathedral in the country. The €5.00 entry provides not only excellent value but access to the beautifully ornate Capilla Mayor together with numerous other chapels, many of which contain works by some of the Spanish Grand Masters.

Court of the Myrtles, Alhambra Palace The Cathedral’s impressive western facade faces Gran Via de Colon, which leads to Plaza Isabel la Catolica, the city’s main square. From here, be sure to follow in the footsteps of the City’s many distinguished visitors by walking along the Carrera del Darro, which follows a pleasant route along the banks of the Darro river.

When should I visit Granada?

Spring is the best time to enjoy Alhambra’s gardens at their blooming best, however, there is also something to be said also about the Gardens’ spectacular copper tinge during the Autumn season.

During the warmer months, the searing mid-afternoon heat can be unforgiving, so visits to the Palaces and gardens are best saved for the early morning and late afternoon.

Night visits are also possible, so a multiple-entry three-day ticket may be the way to go if you want to enjoy the site in its various guises.

The must-see festivals in the city are all very much dictated by the church calendar. Semana Santa (Holy Week) is a busy period with a total of thirty-two processions over the course of seven days, and during the colorful ‘Day of the Cross’ in May, every household decorates their crucifixes and puts them on display for the world to see.

The year’s crowning event however is the Corpus Cristi fair held in June each year. This week-long festival, celebrated with late-night parties and one of the largest fairgrounds in the region, surpasses these with its many colorful parades where locals dust down and don their traditional flamenco and ride around the City in their horses and carts. 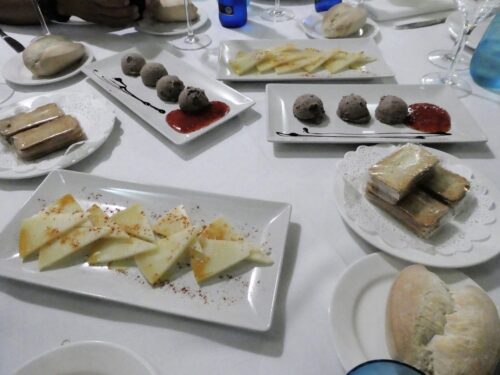 Yes, you did read correctly, free tapas! These most traditional Spanish foods are said to have originated in Granada, supposedly, as wine or sherry glasses were covered with bread or meat (literally ‘lids’ or tapas) to keep the flies away. Bartenders would use salty meats like chorizo or Spanish ham which made their punters thirsty, thus increasing alcohol sales.

Calle Elvira has the main concentration of tapas bars in town, although Plaza San Miguel Bajo is the place to go for al fresco drinking and eating during the warmer months.

Anywhere you go though, most bars will still offer the traditional free ‘tapa’ with every drink purchased, contributing nicely to an inexpensive night out on the town.

After starting the evening on the tapas trail, the party continues on the streets of Granada into the small hours of the night. The streets near the Cathedral are popular nighttime haunts for the local glitterati, however, the younger crowds, particularly the student set, tend to head to Calle Pedro Antonio de Alarcón where the drinks are cheaper and the doormen are less picky.

Larger clubs, located along the Gran Via or Plaza Nueva remain open until at least 7:00 am but you can expect a small cover charge at entry.

Granada’s airport is located 12km from the City Centre but serves only a limited amount of national destinations. Malaga Airport (about 125km away) is the major transport hub for the region offering regular daily services to Madrid and Barcelona, as well as flights to most European cities as well as some to the US and Canada.

There is a direct bus from Malaga Airport to Granada which operates four times daily, as well as an hourly connection between the bus stations in Malaga and Granada. You can check bus schedules here. A taxi from Malaga to Granada costs about €200 so may be an option for groups of three or above.

Tristan Cano was a freelance travel writer and journalist who lived and worked in his beloved Gibraltar on the southernmost tip of Europe. He wrote extensively in the Gibraltarian and international press about Gibraltar’s history and was the author of Historic Walking Guides: Gibraltar. Sadly, he passed away in 2013 from a brain tumor.