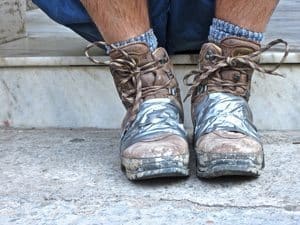 Our group, the Pokhara 31 we call ourselves, start off piled into two rickety buses bouncing around the dusty roads of Nepal climbing higher into the hills for the small village of Dhikurpokhari.

We have gathered together from different parts of the world, bankers, filmmakers, and fashionistas, men and women in their 20’s, 30’s, up into their 60’s, for what would be a week of strenuous labor. None of us have any business lifting shovels or pickaxes, but 31 of us are here to build the first school in memory of our friend Guy Joseph, an adventurous traveler who died tragically in a paragliding accident in October 2011.

Journey to the Village
We are in high spirits, the bus buzzing with excited conversation in our matching white Guy’s Trust t-shirts, anticipating what kind of work might lie ahead of us. I presume I’ll be flipping a switch on and off, on and off for a concrete mixing machine or something equally undemanding.

This is to be the very first ground breaking and laying the foundations for one of three Guy Joseph Early Childhood Development Centres (ECDC).

During the one-hour ride, we ‘ooh…’ and ‘aah…’ out the windows over the snow-capped Himalaya range. We tie on our steel-capped boots as we get nearer. First a sign greets us, painted in impressive handwriting, ‘Welcome to the friends and family of Guy Joseph.

Thank you for your support of the people of Dhikurpokhari.’ I’m touched and I prepare myself for the wave of emotion that will befall upon meeting the villagers.

“Namaste!” The first greetings come from the roadside. We wave back to their prayer-pressed hands and faces all smiles.
From the road we hike a short way down the hill, taking in the magnificent terraced views surrounding us, layers upon layers of mountains fading with distance against the blue morning sky. Greetings of namaste come from all around.

The village is even smaller than I had envisioned, but a crowd of about sixty have gathered to welcome us. Looking into the eyes of the people, the children are full of excitement, the parents full of hope. One woman strokes my arm, and I try to imagine what this school must mean to her.

The Welcome Ceremony
Two rows of plastic lawn chairs have been set up for us on one grassy terrace and we take a seat while the villagers watch from the terraces above. A group of men wearing traditional fez-like hats made of herringbone begin playing music, a cacophony of a snake charmer’s tune, backup horns, a light drumbeat and a lone symbol.

The Nepalese man conducting the ceremony wears a Guy’s Trust t-shirt over his plaid button-down and invites the Joseph family, Tony, Vicky, Lauren and Alex, to sit at the head. He then begins in Nepalese and translates, “Welcome to the people of Guy’s Trust and Action Aid. Thank you for coming. I’d like to begin today by holding one-minute of silence for Guy Joseph.”

Hats are respectfully removed and looking towards the Joseph family, emotion begins to build inside of me. I know I won’t be able to contain it. Gemma, my travel mate and a mutual friend of Guy, is standing next to me and grabs my hand. We wrap an arm around each other and the tears begin to flow.

One minute feels like ten. I think of Guy and of the local people standing around us. I think how strange they must find it that we have gone to such lengths for the death of one man, but also how grateful they must be in the midst of our loss.

I wonder if they refer to themselves Dalits – or untouchables – as the rest of their society deems them. They don’t look untouchable to me. The minute ends, and I am relieved.

Tissues are passed around while the speeches begin. After, flower garlands and polyester shawls are given to each of us for good luck. A woman with a face like wrinkled linen, kind and peaceful, places them gently around my neck. “Dhanyabaad,” I thank her and we bow to each other. The aroma of the red and purple flowers envelops me.

Blessing the Building Site
The land, which had been donated by an elderly woman, her home torn down and she relocated, is blessed according to local custom. After a year and a half of grieving, of fundraising, of stressing and preparing, it’s finally time to get to work.

For five days, from Monday through Friday, we labor side by side with the villagers. We move earth, make bricks, dig trenches. There is no cement mixer, as I had envisaged. We mix the cement with shovels, moistening it with a watering can.

The local women, dressed in their brightly patterned skirts and blouses and wearing flip flops, carry the heavy sedimentary rock that will secure the foundation with baskets on their backs and a strap around their foreheads. I feel guilty with my work gloves my required steel-capped boots, a safety regulation as a UK-based charity.

Fleetwood Mac plays over the portable speakers. We trade jokes and stories with each other and exchange smiles with the locals as we put our backs into our work, each of us with various designated tasks.

Dialogue with the Kids
Every water break we take, the local men and women continue to work while the children take advantage of the opportunity to practice the bit of English they know.

“Hello, how are you?” one boy says in a sweet robotic manner.

“I’m fine, and you?” I reply ready to role-play the usual dialogue.

“Fine, thank you. What is your name?”

Volunteering is work. Hard but rewarding work. “Angela. What is your name?”

“My name is Monis. What is your father’s name?”

“ My father’s name is Ramsingh.”

“What is your mother’s name?”

And the conversation continues like so. The same boy played air guitar with me using shovels later in the week, a cheeky smile spread across his face.

Harlem Shake
The last day, we had all anticipated it. However, it had come so quickly. None of the Pokhara 31 wishes to leave and go back to our respective countries with our conventional jobs in our air-conditioned offices. Still, we had one thing yet to do: The Harlem Shake.

Tony, the good sport that he is, put a decapitated teddy bear head over his own and plays the instigator dancing lonely on top of one dirt mound above the trenches. The techno music plays and Tony swings his hips with index fingers raised like a drunken cowboy shooting his pistols clumsily into the sky. From the sidelines we giggle, silently praying none of the dirt will avalanche down, undoing the hours of shoveling now completed.

After two takes, the project manager, Subash, translates to the locals. Don’t look at the camera. Imagine you’re at a disco. Go crazy. Many of them embrace the moment with buckets and pickaxes and shovels. Some look on like we have all lost the plot. The bass line hits and we groove in and around the trenches to the Harlem Shake.

What an incredible week it was! Despite the language barrier, we had spent our daylight hours with these people as their equals, sweating with them, clowning around with them, communicating through body language, laughter, bits of broken English and a few who could translate.

Saying goodbye takes the better part of the afternoon.

The children see us off all the way to the door of the buses, some with tears in their eyes. They wave and we wave back until we are out of sight. We go back to our hotel exhausted, yet feeling so much reward and humility, with the villagers’ promise to work diligently to complete the school within five month’s time.

The Villager’s Promise
They have stayed true to their word. Twenty days later, the trenches we dug have been filled with rock and concrete, and a wall now stands knee-high with the bricks we helped to make.

By September of this year, the Guy Joseph Early Childhood Development Centre will stand tall, ready for its first year of students complete with furniture, educational materials, and trained teachers.

The second school will be finished soon after, situated on the Annapurna trail. So if you find yourself trekking the Annapurna Circuit, keep your eye out for it and be sure to stop to say hello, and perhaps sing a round of ‘Head, Shoulders, Knees and Toes’ with the children.

Guy had a wonderful way with children. Everywhere he went he took the time to schmooze with the local kids and he could light up their faces in a way I’ve never seen. He was also a patient and gifted teacher and for these reasons, the charity, teamed with Action Aid, is building three schools around Pokhara, where Guy once lived and learned to paraglide.

He loved it there and had planned to return. The school will provide early education to the underprivileged children in Kaski District, especially girls who would otherwise not receive an education.

The charity also funds internships for Indonesian students with the MantaWatch conservation project in Komodo National Park, which Guy worked with while living there.

Established in January 2012, people around the world have organized more than 30 fundraising events and raised over £136,773 for Guy’s Trust and the charity continues to grow. Website: www.GuysTrust.org 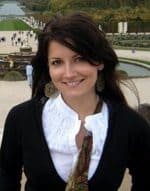 Angela Allman lives in Thailand as a teacher, a writer, and a traveler. She has been featured in The Expeditioner and World Travel Buzz. When she’s not toasting a glass of red wine to the blank page, Angela can be found scuba diving, doing yoga or napping.