England: My search for Moushill Mead

Jules wrote the number 7 with a line scratched across the middle like the letter F.

His precise penmanship, the folded Mailblock blue airmail envelopes and even his return address intrigued me: Moushill Mead, Milford, Surrey, UK.. His house had a name.

I imagined a grand English manor with butlers and upstairs maids, and manicured hedges thick, tall and green. I pictured stone walls and buttercup-covered meadows and fireplace hearths one could stand inside.

The address, and everything else about Julian and his cousin Charles, seemed so posh, so British.

I met the boys just after my first year of college when spending the summer with my brother Mark in Fort Worth, Texas. I took a job that summer serving sloppy enchiladas at a theme-park-like restaurant called Casa Bonita—a monstrous place only children could love.

An entire Mexican pueblo clung to its cliff-like walls while mariachi music blared and a bathroom-bowl-blue waterfall splashed noisily near the entrance. It was the last place I’d expect to meet two handsome British lads.

It was rumored they were heirs to a vast fortune but that their fathers insisted they work while on holiday in America. I doubted that, but their family had some connection to the restaurant. The waitresses gushed as though two crowned princes had come to bus tables.

It was the 80s; Princes William and Harry were still babies. I was too, in many ways. It was an innocent age. We became friends. It was romantic only in the way that youth is by nature giddy and optimistic.

My brother, the boys, and I spent that July sailing and swimming. We ate nachos and sipped strawberry margaritas, went to the mall and the movies, drove around Cowtown with the radio blaring, and two-stepped that Urban Cowboy summer away at Billy Bob’s.

We were with them so much that Mark and I would catch ourselves slipping into a British accent, sending us all into fits of laughter. We enjoyed our new friends and grew closer to one another.

Jules and Charles were disarmingly charming but also genuine. They had the good manners, intelligence and kindness our parents had taught us were the norm but that the world hadn’t often shown us outside our home.

One evening they wore ascots and striped dinner jackets to supper—even they laughed with us about that. That last week, my sister and I took the boys on a canoe trip in the Ozarks on the Buffalo River. I remember pretending to be asleep in the backseat on the way home so I could just listen to them talk and hold the day like a quiet little present in my pocket.

At summer’s end, we drove to my parents’ home near Hot Springs, Arkansas. We explored the town’s old fashioned bathhouses and racetrack, lounged in the lobby of the art deco Arlington Hotel and ate barbecue at a dive called Stubby’s. At home, my mother doted on the boys, making them tea and scones.

When September came, Jules promised he’d write. Over the next few years I received a few friendly epistles from Moushill Mead.

I don’t know when the letters stopped. Our endless summer simply drifted away like a dream from which we’d quietly awakened. Meeting the boys had reminded me that the place they came from—and that I come from too—was innocent, clean, hopeful and civilized, and that it is neither pretentious nor naive to want to build our lives in places like that. True wealth is a fine family, new friends, a season in the sun.

I knew my boys of summer a short time a long time ago. Decades have passed, and I’ve been to England many times, but it wasn’t until last spring that I went to Moushill Mead.

When I first decided to go, I remembered the movie 84 Charing Cross Road, in which an American enjoys a long pen-pal friendship with a bookstore clerk in London. But when she finally visits the store, the friend has passed away. The story is bittersweet and not unlike my own, for even if I were to find Jules and Charles on Facebook, we would no longer be 18, guileless and green.

More curious than sentimental, I wanted just to knock on the door of Moushill Mead and see the mailbox that had held our letters.
The entrance to Moushill Mead in England. 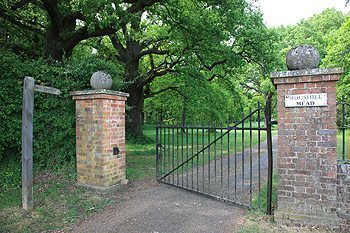 A light rain fell as I left London on the train, but the sky was clear as I stepped into a bright spring morning in the rural hamlet of Milford. I stood on the empty platform at the station and then followed a slender curved road toward town.

Hedges alit with honey bees lined the street, and bunnies loped along ahead of me leading the way like friends in a Beatrix Potter storybook. I walked this ribbon of road about two miles, past the post office and a pub. Each house I saw had a name.

In the countryside just beyond the village, I came upon two stout brick columns and a black iron gate leading to a road through the woods. One held a small sign: Moushill Mead. A wooden post was marked “public footpath,” so I opened the gate and entered.

I marveled at the park-like splendor of the estate. Enormous evergreen trees, as tall as the pines of Arkansas, swayed as a spring wind swept up to welcome me. I followed the path to the house.

Moushill Mead was like a large enchanted cottage in a storybook. Resting on nearly five acres, it had once been the stables for the adjacent manor, but it was neither small nor disappointing. Sprawling and splendid with tiny-paned windows, tall brick chimneys and three chunky gables, the house was hugged by a hardy vine of tiny roses that climbed and fell about the doorway in soft white blooms.

A brick garden wall blocked my view of the back of the house and the mead beyond it. I peeked through the cracks at the secret garden of Jules’ childhood

Through open windows I could see toys of small children. A car was parked out back, and I thought I heard laughter from inside. I knocked, but no one came to the door. A brass bell hung beside it, and I rang it.

I lay my palm flat on the face of the door, and I left.
In the bent blowing grass and shade of oaks and evergreens, I turned back toward the road. I liked thinking of Jules’ growing up in this Elysian place. I pictured the two cousins playing in the meadow, coming through the gate, touching that same door, ringing the brass bell.

A neighbor from the manor house told me that, after living there more than a half-century, Jules’ family had sold Moushill Mead just a few years earlier and moved to a nearby town.

In To Kill a Mockingbird, Harper Lee writes, “You never really know a man until you stand in his shoes and walk around in them.” Just standing at Jules’ door was enough.