The Idaho Panhandle: Crossing the Crown of the Continent

Go, nomad, go, to one of the world’s most wild and green places. In the Northwestern United States of America. A combination of protected wilderness and excellent access means that all sorts of travelers can experience the forests and landscapes for themselves.

One of the best places of all is the Idaho Panhandle — the narrow strip of Idaho State that juts north to meet Canada. A explorer to this often-overlooked area will find craggy mountains, vistas of emerald green mountains, and abundant quiet forest groves.

It is almost inconceivable that this area has experienced two of the most apocalyptic flood events ever on Planet Earth — one of water, and one of lava.

Here, between the Rocky Mountains of Montana and the jagged basaltic deserts of inland Washington State, there’s an amazing depth of territory to discover. Moving east on Interstate Highway 90, you can find a good taste of America’s evergreen forests, and follow the path of a prehistoric cataclysmic flood that sculpted the land.

Idaho is truly a gem among the states, and in the narrow northern parts between Spokane, Washington, and Missoula, Montana, you’ll see some of the most underappreciated and emerald green parts of North America.

Spokane, on the eastern edge of Washington State, is an important regional city and a gateway to the green hills of Idaho. The city itself is good example of mid- to larger size American heartland cities, with a feeling much more stable than Seattle to the west.

The region around Spokane is drier, lower, and rockier than the areas further east. The impressive basalt cliffs and canyons were formed by immense volcanic flows spilling out of what is now Yellowstone National Park, which filled the place with lava all the way westward to the ocean.

Coeur d’ Alene, and Sandpoint to the north, have a special spot in the hearts of the outdoor recreational community, being a triple mecca for the high-powered engine sports: jet skiing, snowmobiling, and off-road biking.If you carry on eastwards along I-90, just a short hour-long drive, out of the lava landscape into Idaho, you’ll arrive at the picturesque and charismatic town of Coeur d’ Alene. This vacation spot, meaning ‘the Heart of the Awl,’ is perched on the edge of a large freshwater lake and ringed by pine and fir trees.

Here you can waterski, stroll on the quiet beach, browse the cafes, bars, and shops, and watch the mountain sun sparkle on the lake.

A quick diversion to the south is Moscow, home of the University of Idaho, and at the edge of the very distinct, and very fertile, Palouse region. It may seem hard to believe, but these steep hills are formed of the volcanic dust of the Cascade Volcanoes, far to the west on the coast range.

The prevailing winds deposited the fertile ash at the base of the Rocky Mountains, and it is now among the world’s best agricultural land.

Moscow is a university town, with the liberal and hip feel that is slightly out-of-place in a generally conservative region. Here you can also find an excellent organic food co-op, and prepare for your journey in the bookstores and farmer’s markets.

As you continue inward into Idaho, up the steep and intense canyon road next to the raging Clearwater River, vast tracts of National Forest carry on in all directions.

Much of the evergreen forests have been cut in the last two centuries, but for those able to walk or ride deeper into the hills, pockets of wilderness remain. In fact, Idaho has the largest amount of declared and protected wilderness of any of the Continental 48 States.

The mines are hidden from view, but you can get a sense of the excitement and bustle of days past by exploring the historical downtown area. Every building is officially registered as a local monument.Buried deep in the forest, but still along the I-90 highway, is the historic town of Wallace. It’s got a short but shining history as a mining town — since the 1880’s, this corridor through the mountains is one of the world’s best silver mines.

From Wallace, side roads lead north and south into valleys noticeably scarred by the metal mining and forestry activities. The trees are growing back, but the toxic chemicals released by some mining practices will never be cleaned up.

You can continue on deeper into the National Forest from there, and trek up into the cleaner and greener forests. There, the woods cling steeply before giving way to rocky meadows and boulder fields on the Continental Divide ridge. northeastern edge of Idaho.

The border between Montana and Idaho runs along this geographical feature; to one side water drains to the Columbia River and the Pacific Ocean, and to the other it drains to the Mississippi and the Atlantic Ocean.

Back on I-90, you can continue on eastwards through the Panhandle. Along the Clearwater River, several Forest Service trails offer tempting gateways deep into the high mountain and forest wilderness.

It is along this very canyon that the famed explorers Lewis and Clark traveled on foot en route to the Pacific Ocean.

One exceptionally pleasing stop is the Jerry Johnson Hot Springs. After taking a dramatic footbridge across the river, you trek for a few hours to arrive at hot pools hiding under the cedar trees.

They are not only perfect places to have a soak, but also to meet people from Missoula, just over Lolo Pass in the state of Montana.

In the final stretch of your I-90 travels,you have definitely arrived from the basaltic lowlands and into the Rocky Mountains, a portion of the American Cordillera.

This vast range stretches leftwards up into Canada, southward through Mexico, and picking up as the Andes Mountains of South America.

The mountains, fundamentally, are formed by the American Continents moving westward and on top of the Pacific Ocean.

The forests are less green, and noticeably sparser, than the lower stretches of the Clearwater. The mountains, too, are more bare. You’ll be shivering in winter, but delighting in the open sky in summer.

Missoula, Montana, rests in the middle of a large basin. Another university town, it is extremely well endowed with excellent bars, cafes, restaurants.

The vibe of the town is both relaxed and ambitious. On the steep and green meadow hills above the city, a curious pattern of ripple marks can be seen. Missoula sits on the bed of what used to be one of the largest lakes on the continent.

Repeatedly, over the last few hundred thousand years, the ice sheet covering Canada stretched a lobe into this area and an immense lake formed above the Clearwater. When the ice melted, the floods raced out down the mountains and across the deserts of Washington State, to reach the ocean in one immense rush of water.

As you travel up the canyon on the fast highway of I-90, you are also backtrackinging what was once the path of the world’s most torrential flood.

Besides all of these geological wonders, you’ve also had the chance to go trekking on the crown of the continent, to learn about the treasure trove of the silver mines, to see the deep evergreen pine forests, to dive into hot springs, and to explore the welcoming downtowns of four friendly towns of the Inland Northwest.

Idaho’s Panhandle is wild, welcoming, and wonderful. I-90 gives you an excellent and easy introduction to a area rich with possibility, and you can continue on eastwards all the way to Boston or westward to Seattle…that is…if you can tear yourself away from the Inland Northwest. 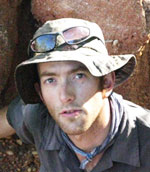 YD Bar-Ness is a conservation ecologist based in Hobart, Tasmania, searching for the Kalpavriksh, India’s mythical wish-fulfilling tree. He hasn’t found it yet, but will make sure to tell you when he does. As a scientist, he specializes in climbing trees to explore the canopy biodiversity, and as a conservationist, he seeks to use geography and photography to create environmental education materials. His writings and photos have been published or featured in Outlook Traveller, Australian Geographic, Jetwings, The Indian Express, Times of India, GEO-India andMatador. Visit treeoctopus.net to learn more about his work.