Moscow: Warming Up After the Cold War

With a Tony Soprano meets Boris Yeltsin reputation, we were not sure what to expect after arriving in this legendary capital.

With six-dollar Big Macs, midnight sunsets, a hundred brands of vodka in your local convenience store, muscled pistol-packing bodyguards, pin striped businessmen, all night dance clubs, and beautiful women right off the set of a 007 movie, Moscow is an intoxicating affront to your senses.

Love it or hate it, this city is a digestible history lesson. Prolonging the paranoia practices of the old regime, it tentatively reaches out to tourists while bureaucratically imposing strict visa requirements.

Teeming with history, intimidating, intriguing and impressive, this eroded super power is high on our list of traveler’s destinations, and certainly worth a visit.

Rolling In His Grave

Ground zero for the Cold War, essential Red Square is the epicenter of Moscow. Passing through the red bricked Voskressensky Gates and crossing over the cobble stoned entry, you cannot help but reflect on how this country was our sworn enemy for so many years.

Here in Red Square, the military extravagantly paraded the military might of this nation while smugly proclaiming the virtues of Communism.

Ironically, Gucci, Armani and other designer stores line one side and face Lenin’s mausoleum across the square. Surely, he must be rolling over in his grave, I thought, as we queued up one morning to file past his body, reverently swathed in red velvet.

At the far reaches of the square sits the majestic St. Basil’s Cathedral (built 1561) with its fabled onion domes. Living up to his name, Ivan the Terrible blinded the architects and designers after construction to ensure its uniqueness.

Not Impressed By the Kremlin

Bordering Red Square is the infamous and somewhat disappointing Kremlin (from the 1150’s), the once secretive and vital nexus of Russian policy. Here you can visit a half dozen Russian Orthodox churches, while other official government buildings are regrettably off limits and heavily guarded by gloomy military personnel

While it is shortsighted to come to Moscow and not go to the Kremlin, prepare to be underwhelmed at $15/person. We thought it overrated, with Red Square more intriguing.

Built back in the 1930’s and 1940’s, the Metro system is not as spiffy and modern as Hong Kong or Shanghai, but more than makes up for it in a Flintstone-like character.

With 15 lines and 150 stations, it is convenient and efficient with trains scheduled every three minutes.

Lacking self-service ticketing kiosks, you have the rare pleasure of queuing in line to purchase tickets from a frumpy woman, who grumpily dispenses your tokens with nary a smile or acknowledgement, casting blame in your direction for her misfortune of being there and not at home, boiling cabbage and potatoes, and watching state run TV.

Step back in time when you arrive at each Metro platform, the doors creaking open to new surprises at every stop.

Mayakovskaya (built 1938) with its patriotic mosaic themes emblazoned on the ceiling, Komsomolskaya (1935), elegantly festooned with crystal chandeliers and marble, and Ploshchad Revolyutsii (1938), with its 76 life sized bronze figures, reflect architectural styles of a bygone era.

My favorite, Novoslobodskaya (1952), is adorned with remarkable stained glass windows. For 75 cents, you can ride the Metro all day, so hop on for a couple of hours and visit the more unusual and artistic Art Deco underground stations.

The Metro is clunky yet durable in the lovable style of the Soviets, with grinding industrial-strength escalators transporting people hundreds of feet underground to the stations. A rattletrap of heavy gauge metal bolted together during the regime of Stalin in the 1930’s, it is remarkable these subways are still in service.

Careening down the tracks at haphazard speeds, the entire carriage swaying and rocking on 75-year-old tracks, it is raucous, timeless, and next to impossible to talk to the person next to you because of the substantial decibel levels.

Hang on, because the acceleration is uneven and immediate, and the deceleration sudden and unexpected. Bouncing around on this relic is the most fun we have had on public transportation since the buses in Indonesia.

Now I Lay Me Down To Sleep

While visiting the monastery Novodevichy Convent, the cemetery next door attracted our attention. The final resting place for war heroes, politicians, literary figures and other people of importance, the gravesites are unique in their artistic design.

Blocks of marble and granite are chiseled into images of the deceased, some life-sized, others just a bust of their head.

Every row of tombstones brought exclamations of surprise and wonderment, as we wandered up and down in rapt appreciation – a seemingly ordinary burial ground filled with such monuments of immortality.

To appreciate Moscow, wander the streets, as there are many classical churches and buildings on every block.

Search out the feared and mysterious KGB headquarters, clearly marked on our tourist map, with darkened windows and imposing metal bars in a timid and innocent brick structure.

Discover the impressive Church of Christ the Savior, elegant and reverent, but pass on the Pushkin Museum across the street. Not worth the fifteen-dollar entrance fee, it contains rooms of replicated statues and little worthwhile art.

Many of the Orthodox churches are free and open to the public, a wonderful way to appreciate the cultural richness of this fine city. Fortunately, Moscow is compact, with most tourist sites within walking distance of Red Square.

Moscow is expensive. The Courtyard Marriott, a few blocks from Red Square, is perfect, where doubles range from $200-400/night. Regrettably, they wanted $40/day for internet access.

We spent two other nights at the Maxima Irbis Hotel, good value at $125/night, which included breakfast and free WiFi in the lobby. However, this hotel is on the outskirts and requires navigating the Metro to arrive at Red Square.

Souvenir shops are no bargain, though I longed for a classic and threadbare CCCP t-shirt for thirty bucks. Everyone sells those wooden dolls within dolls, all notably made in China. Admission to the popular sites can get expensive, so get a good guidebook and check their recommendations.

One thing that is not expensive is the alcohol, a somewhat sobering reality in Moscow, with cheap beer and vodka sold at every claustrophobic corner store and outdoor vendor.

Because of the low cost and availability, people drink openly in public, with bottles overflowing the trash receptacles and littering the public spaces.

Perhaps it is their disillusionment with life, as there are obviously many wealthy people in Moscow, yet so many more that do not share in this prosperity and probably never will.

There are strict visa requirements for Americans visiting Russia, with inflexible entry and exit dates. We organized our train trip across Russia through Monkey Business. Their Hong Kong office arranged all documentation and visas.

Surprisingly, our ATM card did not work in Russia due to a high rate of fraud, so check with your bank before leaving. Fortunately, we were able to receive cash advances on our Visa card to get us by.

Always carry your passport or risk a fifty-dollar fine from the ubiquitous police. Finally, unless you are Dr Zhivago, do not even think of visiting during the frigid winter months.

What the Future Holds

With ongoing political unrest, undeveloped economic market structures, and a nagging repressive political structure, Russia has a ways to go to fulfill a true free society.

Relaxing the onerous visa requirements and encouraging more tourism would certainly be a step in the right direction. Still, Russia lacks the thriving vitality and bustling economic energy so evident in Asia.

A repressive and socialist country trying to shirk off its failed communist pedigree, it has the potential, but only time will tell if it has the willpower and initiative.

Moscow is a curious and fascinating city, with legendary sites entrapped in centuries of history and mistrust.

After years of paranoia, Moscow now seems to be warming up after the Cold War, cautiously extending its hand out to tourists. Ultimately, it is both a surprising and evocative destination. 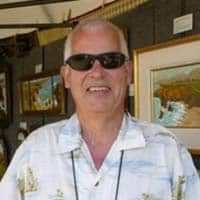 Bill Pfeffer has recently returned from a thirteen-month trip around the world overland journey. He lives in Northern California, and is a successful artist and aspiring travel writer.

Bill Pfeffer was born and raised in Manitowoc, Wisconsin, along the shores of Lake Michigan. After graduating from the University of Wisconsin with a degree in Economics he moved to California. He is a plein-air oil painter of landscapes and seascapes, preferring to paint on location under the pressure of changing light and weather, so as not to deliberate so much over each and every stroke of paint. He has painted every beach scene along the Sonoma coast, his favorite location for spending the day. He and his wife Marge enjoy traveling around the world.

www.billpfeffer.com
If this story has inspired you to travel, why not check out the prices to get there and make it happen? Search airfares, hotels, and rental cars here. Thanks!