I sat on the boulder amidst a vast, green, mountain gorge, and felt faint. The adobe house, roofed with rusted corrugated tin, faded in and out of my vision. My head felt light, disconnected, and warm. A tingling sensation crept across my scalp, and slowly, the scene began to white out. Immediately, I shook my head, and grabbed the boulder next to me, as I cleared my mind and remembered that I was 12,464 feet above sea level.

I just finished the first challenge of my South American expedition: the half kilometer long tunnel inside the mountains on the way to Chicla. I blinked as I tried to breath normally, but the scene began to white out, and I fainted from the over exertion and extreme altitude.

The route from Lima to Huancayo contained several perils. First are the reckless Peruvian drivers. With little to no shoulders on the roads, they were a constant threat.

Second were the large drops on the sides of the road; some were over 1640 feet. Third was the climb, from sea level to 15748 feet in altitude. At that elevation, high altitude sickness, locally known as soroche, was a constant threat.

The most dangerous challenge were the long tunnels. These tunnels are high, unlit, and narrow. Mix this with carbon monoxide poisoning, crazy drivers, a steep incline, pitch black, and soroche, and you have a potential death trap for an unprepared cyclist.

I wasn’t unprepared. Assessing a challenge, determining the level of risk, and reducing it to a manageable level is my specialty. I didn’t want to get nailed with soroche while cycling through the tunnel, so my plan was to locate the tunnels, and rest the night before at San Mateo, a small, high altitude mining town. This gave me time to recover and adapt my body to the high altitude before entering them. The biggest tunnel is 11811 feet above sea level.

The mobile threats were the omnibus drivers, who drove giant six to ten wheeled, double deck buses. They were fast, reckless, and often drunk. So, the second step was to leave early in the morning, thus avoiding the bulk of the traffic. I also had front and back lights equipped, and I cycled as close to the edge as possible. This dropped my risk level to a point where I felt confident that I’d survive.

And then there were the four tunnels. The last two were the shortest, and the first, the longest, was the worst. The three days before I arrived in San Mateo, I managed to make 15.5 miles per day, a slow progress due to the steep incline. The morning I left town, I felt prepared, and expected to do the same amount of mileage. After a half hour of cycling, the incline increased, so I pushed the bike.

Mile after mile I pushed my 110 pound bicycle, until I finally came to the dark, gaping maw of El Tunel Cacray. It was 9 AM, and the warbling of birds felt surreal against my sense of intimidation. The morning mist rolled up the sides of the mountain, and moistened my face as I looked into the horizontal abyss.

“This is it.” I turned on my camcorder light, my mounted flashlight, and my red blinker in the back. I took a deep breath, and entered. I was only a few feet in when I felt the darkness surround me like a closing maw of a massive predator. I didn’t look back out of fear that I’d chicken out and turn around. I had to move forward. I’ve never been claustrophobic, or afraid of the dark, but the moment the pitch dark enveloped me, everything inside of me began to scream. The only light was the dim, barely perceptible beams from the camcorder and flashlight. The flashlight began to flicker, and then it dimmed.

“Dammit! That was a new light with new batteries!” I cursed as I pedaled harder, and the tunnel nullified my senses.

Suddenly, a bright flash reflected off my glasses, and a truck roared by me, as its red lights cast a beacon. As I followed it, I was blinded by the high beams of a speeding car. My survival instincts kicked in, and I leaned into the side as I pedaled harder through the inky depths. More cars followed, and they squeezed me along the razor’s edge along the thin gutter. Soon, it was quiet, and the sound of my breathing, grinding gears, and wheels echoed inside the tunnel.

I felt uneasy, as I realized the length and depth of my dark isolation. My knees cried in pain, and I felt a bite on the side of them. My spin cadence was too high, and my knees paid for it.

I kept moving. To calm myself, I thought of the rewards once I got through: sunlight, fresh air, green grass, flowers, rain, water, and food. I kept thinking about food, since it had been days since I had a decent meal.

After what felt like an eternity, I saw a bright dot ahead of me. Like a moth, I kept moving towards it. It grew larger, and the light flooded my vision. My head worryingly started feeling light, but I ignored it, and cycled harder. The pain in my knees made me wince, and I felt the incline get steeper. But the light grew, as well as the strange buzzing inside my head. Finally, I felt the sun’s warmth on my back, and blindness from the light.

I didn’t stop. My body was on autopilot, and I charged up the mountain until I collapsed in a parking lot near the mouth of the exit. I looked at my watch as I lay there. It took an eternal fifteen minutes to get through. An elderly man watched me collapse, came over, and stared at me. I sat up, and asked the man if there were any more tunnels. He said there were two, but they were smaller than Cacray.

The two tunnels weren’t long, and I cleared each one in under a minute. I had to climb another 984 feet to get to them, and the ascent made my lightheadedness worse. When I finished the last two tunnels, I stopped at the grassy area with the boulder to rest.

So there I was, fainting on the boulder, staring at a crudely built adobe house, and trying to keep my spinning head from getting worse.

“This isn’t right,” I thought, “my body should be adapted by now.”

Unfortunately, the 984 feet was enough to put my body on the fritz. My heart beat rapidly, as I forced my lungs to pull in more air. It wasn’t enough, and I realized to push further was reckless. I had to find a place to sleep, and I needed time to adapt.

Small mistakes compounded into life threatening errors at such a high elevation. Unfortunately, I was several miles from the next town, so I took a few deep breaths, picked up my bike, and pushed up the road.

As I pushed, each meter in ascent meant a higher risk for acute altitude sickness. I carefully paced myself, and stayed conscientious of my body.

I made it to the village of Chicla, and there were no empty hostels. The only ones available were in Casapalca, a mining colony, which was higher at 15360 feet. As I pushed up the mountain, I felt an imaginary vise grip progressively squeeze my temples. When I got to Casapalca, I checked into a dirty hostel, and collapsed into the bed. The squeeze on my temples became a painful ache, and it kept me from sleeping. It felt like I was hit in the head with a baseball bat. I tossed, turned, and moaned, as I listened to the sound of my heart roaring in my ears. Nausea rocked my stomach, and I wanted to vomit.

I got up, and went next door to a café where I drank coca tea, known as maté de coca.

Made from an infusion of hot water and coca leaves, the locals used it to combat altitude sickness. Two cups, and an anti soroche pill later, I managed to fall asleep, but it was intermittent. I awoke in the middle of the night with a grinding pain against my temples, until I finally listed into a deep slumber.

I got up the next morning, and grabbed my head. The pain was gone! My body adapted faster than I thought, and I checked my heart rate. It was rapid, but not as fast as the night before. As I bathed myself with a pot of boiled water, I thought about the new challenge for the day. The high mountain pass through Ticlio, which consisted of a climb to 15744 feet, was the last obstacle before I entered the Altiplano.

Was I acclimated or would I succumb to soroche? I had another 2624 feet to climb. I took my time pushing my bike up the winding series of roads that made up the Ticlio pass. It was slow, but steady progress, and I figured I had another hour before I made it to the highest part of the pass. And then I heard the explosion.

It sounded like a loud “thump.” I looked up and saw a landslide of several tons of dirt fall off the side of the mountain onto the road. The traffic slowed to a crawl, as several 18 wheelers gingerly made their way down the road. I took a break, and rethought my strategy.

“Just great. First altitude sickness. Now, landslides. What to do…” I said. As I mulled my situation, a light blue, official looking SUV pulled up alongside the road. The markings said “Mining Police”, and a cop got out of the car. His partner looked at me, the bike, and then at the mountain pass. They offered me a lift to the other side of the peak, stressing that the landslides were extremely dangerous.

I quickly processed the risks of continuing up on foot to the Ticlio pass. A line of traffic wound around the mountain side, and I wasn’t the only one affected by soroche. I smiled at the cop, and said “sure.” We put my bike into the patrol truck, and drove through the Ticlio pass.

Welcome to the Altiplano

They dropped me off beyond the summit, and the soroche came back with a vengeance. Dizzy, I hurriedly descended down the road to La´Oroya, dropping almost 4000 feet in elevation, which took care of the dizziness, on 35 miles of glass smooth asphalt roadway. I cruised at an average of 35 to 40 miles per hour, grinned at the exhilaration of the ride, and felt relief that there were no more ascents. I finally made it to the Altiplano. I got to La’Oroya safely, and prepared for the trip to Huancayo. My adventure through the heart of South America was just getting started. 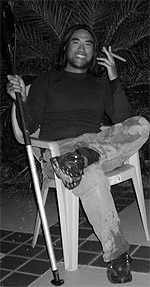 David E.X.N. Nghiem is the author of the book,Jackfruit: A Bicycle Quest Through Latin America

based on his bicycle expedition through South and Central America.