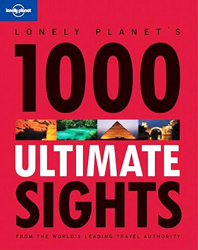 Lonely Planet’s guidebook, 1000 Ultimate Sights, lives up to the promise in its name. Listing dozens of fantastic sights all around the world, this book has something for everyone.

Instead of outlining any particular itinerary, the guide allows readers to choose their favorites from a wide variety of categories including craziest buildings, best sunrises and sunsets, most fairytale-like European castles, and most amazing natural phenomena.

Presented in an accessible list format, Lonely Planet’s guide is also full of gorgeous, large pictures to give readers an eyeful of some of our planet’s most spectacular sights.

Here’s one of the book’s great lists, describing ten of the world’s most marvelous monasteries and convents. Nestled among mountains or hidden inside lush forests, these spiritual retreats offer travelers a place to stop for a while and rest while taking in the age-old mysteries and priceless treasures of the faithful.

Excerpt from the book: Most Marvelous Monasteries & Convents

The nuns once had it good in Santa Catalina. This elegant Mujédar-style convent was founded in 1580 by a wealthy widow who accepted only upper-class nuns – with servants. A strict sister put a stop to all that in the 1870s, and in 1970 the Peruvian government declared tourists could nose inside.

Now there are far more visitors than holy ladies scurrying about this walled citadel; the remaining 30-or-so nuns reside in one corner, while the pastel-painted alleys, flower-filled courtyards, even the Silence Yard where sisters would sit and pray the rosary, are open to all.

The lush Ihlara Valley harbors around 60 Byzantine chapels, churches and monasteries – you just can’t see most of them. Because here in Cappadocia the volcanic tuff is so soft it was once easier to build dwellings into than on it. The locals became troglodytes – including the monks of Selime, who lived in its underground network of dorms, kitchens, stables and a cathedral.

When it was first hollowed out in the 13th century, bright frescos adorned the walls; today, little decoration remains. But it’s still an atmospheric experience to enter this cave complex, before emerging, blinking, to admire the weird rock-valley views outside.

Ascend a mountain, meet an icon – that’s why people come to Montserrat, a 1230m outcrop 40km from Barcelona. Up here lives La Moreneta, a small black Virgin statue that, it’s claimed, cannot be moved: a past bishop tried, but she wouldn’t be budged.

So instead they built a chapel to house her here, which has grown over the years into the Montserrat Monastery – a complex incorporating a museum, a hotel, even a post office. But it’s the Basilica everyone beelines for, to kiss the icon’s feet and ask for her blessing.

Nothing’s prosaic in Bhutan. The lotus-born Buddha didn’t walk to this auspicious spot, 3000m up in the Himalaya; he flew on the back of a tigress. And when the original builders later constructed the monastery, they used not bolts to anchor it, but the hairs of female spirits.

Such is the mysticism that surrounds Bhutan in general, and Tiger’s Nest Monastery in particular. The imposing fortress, a cascade of flared roofs and white walls, clings to a cliff face 900m above the Paro Valley. Without a flying feline you’ll have to get there by foot.

Mons don’t permanently confine themselves to monasteries in sleepy Luang Prabang – get up early and you’ll see processions of tangerine-robed devotees strolling the streets for alms. But that doesn’t mean the monasteries aren’t worth a look, especially 16th century Wat Xieng Thong, practically the only one of Luang Prabang’s many such buildings not to have been sacked over the centuries, and perhaps the country’s most resplendent.

Called the ‘Golden City Monastery’, its interior is dripping in the stuff: the main temple is embellished with shimmering motifs from the Laotian Ramayana, while a golden Buddha surveys the scene.

Thou shalt not make a list of 10 without including this place – St Catherine’s is one of the world’s oldest Christian monasteries, built at the foot of the mountain on which Moses allegedly received the Ten Commandments. Its religious significance cannot be underestimated: priceless icons are kept within its 11m-high walls, such as a shrub growing on the grounds, purportedly a direct descendant of the Burning Bush.

It’s a great staging post for a short pilgrimage, too – strike out early from St Catherine’s to summit 2285m Mt Sinai at sunrise and watch the day break over this biblical land.

Looking a lot like it might not be standing by the time you’ve finished reading this sentence, this precarious place of worship in Sh?nx? providence teeters on stilts on the side of a mountain. Not just any old mountain, mind: this is Héng Sh?n, one of Taoism’s most sacred.

And the peak’s holy influence is doing the trick, as the Hanging Monastery’s fluted roofs, rickety walkways and rare combination of Confucian, Taoist and Buddhist elements have survived for 1500 years. Its architectural mechanics are astonishing given its age – but that doesn’t stop it looking like it’s all about to fall down…

Heaven forbid you’ve sinned before visiting Rila Monastery. The building is imposing, but it’s the frescos you should fear, for on the walls are daubed myriad interpretations of the Last Judgment – winged devils scratching out people’s eyes, transgressors boiling alive and a naked man being sawn in half.

Apocalyptic art aside, it’s a marvelous monastery. Originally founded in the 10th century, today’s structures are 19th century Renaissance replacements (due to fire): black-white-red candy-striped colonnades and thick brick domes. Nestled into the foot of the Rila Mountains, it’s pretty as a picture – even if its pictures aren’t pretty.

If being a monk is about paying penance and removing yourself from society, then budding brothers should look no further. Skellig Michael is a tiny, sheer-sided pinnacle of rock, exposed to the Atlantic elements. For the community that lived here from around the 6th century, life would have been tough indeed.

They’d had enough by the 1100s and abandoned the place – leaving it to the flocks of puffins. But the monks’ legacy remains, remarkably well preserved due to the inaccessible location: Spartan beehive huts, vertiginous stone steps and a chapel perched at the island’s craggy summit.

Come commune with the big names of Russia’s past: composer Prokofiev, writer Chekhov, former First Lady Raise Gorbachev – just three of the glitterati buried within the walls of Moscow’s baroque convent. Built in the 16th century as a nunnery-cum-fortress, its defensive aspect didn’t stop the Bolsheviks booting out the sisters and reclaiming the place – five-domed cathedral, striking red churches, gilded belfry – as a museum.

Thankfully this secular rebirth saved its treasures from a revolutionary razing. Restored to religious purpose in 1945, Novodevichy is one of the few spots in which to celebrate both the ecclesiastical glories and great names of Mother Russia.

Helena Wahlstrom is an editor in New Hampshire, she was born in Finland.

Helena Walstrom was born in Helsinki, Finland where she grew up. She was an intern for GoNOMAD, and was one of the best. She now lives in New Hampshire and works as an editor.

This article was last updated Apr 8, 2019 @ 2:27 pm
If we've inspired you to travel with this story, why not check out the prices to get there and make it happen. Search airfares, hotels, and rental cars here. Thanks!