Nomadic Matt: Tips from Ten Years as a Nomad

For a rapidly increasing segment of the population, the traditional 9-5 life is losing its appeal. No one understands this better than Matt Kepnes, or Nomadic Matt. Almost ten years ago, he realized that living life meant more for him than simply meeting traditional milestones like buying a car, paying a mortgage, and moving up the career ladder, and subsequently quit his job to see the world. That initial trip, which was only supposed to last for a year, evolved into something even Kepnes couldn’t have predicted.

On his blog, NomadicMatt, he shares his tried and true travel and budgeting tips with over a million visitors every month. Ten Years a Nomad: A Traveler’s Journey Home

, however, is not merely a travel guide. Kepnes has compiled his favorite stories and experiences after traveling over 500,000 miles and staying in 1,000 different hostels in 90 different countries into this travel manifesto to show a different side of life.

Filled with the color and perspective that only hindsight and self-reflection can offer, these stories get to the real questions at the heart of wanderlust. Ten Years a Nomad is for travel junkies, the travel-curious, and anyone interested in what you can learn about the world when you don’t have a cable bill for a decade.

Excerpt from the Book: Getting the Bug

I haven’t been everywhere, but it’s on my list. — Susan Sontag

For a decade I have lived a long, peripatetic life on the road. Three thousand nights.

In more than ninety countries. In a thousand different cities. In hundreds of hostels. With countless people. For half a million miles on airplanes, and half a million more (I’ve added it up) on trains and buses and tuk-tuks and cars and bicycles.

That was my home.

In all that time, over all those miles, I wandered with no goal. I wasn’t on a trip, vacation, or pilgrimage. I had no list of set destinations or set sights to see. My only purpose was to travel. To be a nomad: Someone who could move from place to place without urgency, without plans. Someone whose destination was

The journey itself. Someone who just picked up and went wherever and whenever they pleased.

Traditionally, nomads—whether in the deserts of the Middle East, on the steppes of Eurasia, or on the plains of North America—were born into an ancient practice of living life in motion. They were my role models, but unlike them, I wasn’t born to travel and had no tradition to draw from.

In my family, we didn’t travel. My dad did the hippy thing after college, sleeping in German wheat fields and partying around Europe, but by the time my younger sister and I were born, my father’s long hair had disappeared right along with any wanderlust he or my mom had. Instead, life became defined by the nine-to-five cycle of work.

Like most modern American middle-class families, if we went anywhere it was because we were on vacation—leisure travel with a fixed start and end, tied to the calendar of the working year, centered more often than not around visiting relatives. We left home to visit relatives in Philadelphia on holidays or taking long road trips to see my grandmother in Florida. We’d visit Disneyworld and Universal Studios; go bowling; and eat early dinners with my grandmother Mimi. Long car rides, nights at big chain hotels, and trips to theme parks were par for the course.

Like figures from a Norman Rockwell painting come to life, we traveled like middle-class Americans were supposed to travel. Predictably. Safely. And never for too long. There would be no backpacking trips, camping excursions, or jaunts to exotic destinations for us. We were not only not nomadic, but we were also rooted, in place and in custom.

And, as far as I knew, there was no other way to live.

In my mind, travel was a planned break from the rhythm of corporate life, the adult equivalent of being on school break. You worked hard and you treated yourself to an all-inclusive destination a short flight away or spent your time away from the office in some relative’s living room. You took just enough time off that you could muster the strength to go to work every ordinary weekday for

decades until it was time for that fabled thing called retirement when life could truly begin.

After you had paid your dues and followed the rules then you were free to do anything you wanted.

I carried that impression of life and travel with me through my teenage years and into my early twenties. When I finished college, I dutifully and happily took my rightful place at the bottom of the middle-class corporate ladder and took an entry-level job at a hospital in Boston. I answered phones, stocked and ordered supplies, and told visitors which room their sick relative was in—I did every job you’d expect of someone with no experience.

My life became full of routine.

Commute. Work. Thirty-minute lunch break. Gym with the roommate after work. Take out for dinner. TV before bed. On the weekends, my friends and I would try to meet girls at a bar. Each day blended seamlessly into another.

But this routine gnawed at my soul. I wasn’t happy. I grew restless.

I felt as if I was watching my life from the outside, waiting for it to start. Life was supposed to start after college, right? Sure, everyone said that college represented the best years of their lives, but to me, it was always the “real world” that was supposed to be special.

The real world had things that college lacked: a place of my own; money; a steady relationship; the ability to go where I wanted; to do what I wanted; freedom. It was where I could finally start my life.

Except the real world turned out to be boring as hell.

It was my life, all right, and it turned out to be an endless loop of sameness. When I complained, I was often told that it was normal. How it’s supposed to be. “Don’t worry, honey. When you find a job you love, life will be a lot different,” my mother would say to me. “You just graduated. You’re twenty- three. Don’t be so impatient. We all start of at the bottom.”

As I approached my one-year anniversary at the hospital, my boss reminded me that I had to take my accrued vacation time soon. “It’s policy,” she said, “or you’re going to lose it.”

I can no longer remember how it happened—time has taken that precious memory, but I started thinking about Costa Rica. I had come across a tour in one of my many searches online. It wasn’t anywhere I had been before or had even thought much about prior to this, but it was certainly the kind of place my parents wouldn’t have gone, which made it immediately attractive.

It looked . . . different. And I wanted different. Anything that wouldn’t be filled with dreaded routine. An exotic locale where adventure—and maybe some danger—lurked. Online I saw photos of people on a beach, hiking in jungles, and spotting monkeys and exotic birds. They were on zip lines and surfboards. Things I had never done in my life.

They were young. They were happy. But, more important than that, they looked far away from where I was, in that work break room, eating my microwaved lunch, fretting about the long commute home through the harsh Boston winter, which only served to remind me that I was stuck firmly at the bottom of the corporate hierarchy.

When I got home that night, I booked a tour to Costa Rica.

I thought it was just going to be my first grown-up vacation.

It ended up being my first step toward something more than that. 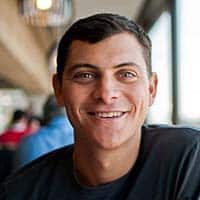 Matthew Kepnes is the New York Times bestselling author of How to Travel the World on $50 a Day and runs the award-winning budget travel site, NomadicMatt.com.

He realized cubicle life wasn’t for him and set off to travel the world. His writings and advice have been featured in The New York Times, CNN, The Guardian UK, Lifehacker, Budget Travel, BBC, Time, Yahoo! Finance and countless other publications. He is also a regular speaker at travel trade and consumer shows and is the founder of the Travelcon show for travel bloggers.