Dusseldorf on a Wing and a Prayer

I’m a planner, especially with my travels.  I typically do a deep dive into a destination, crafting a busy agenda that will inspire me and present the best opportunities for killer images combined with storytelling.

When a spring trip to Dusseldorf, Germany materialized, I didn’t have the energy for mapping out an itinerary, having just lost both of my parents within three weeks.

I wanted Dusseldorf to take the lead, and cheer me up by showing me her best side, which, fingers crossed, would include plenty of my favorite comfort food – Wiener Schnitzel.

My lodging for this short visit was the historic Steigenberger Parkhotel, anchoring the north end of the Königsallee boulevard.

A slow-moving canal flanked by chestnut trees splits the boulevard in two.  Billed as Germany’s most expensive shopping street, prestigious shops and opulent boutiques line either side of the Königsallee.

There was an abundance of well-manicured green space, edged with colorful flowers.   Mostly devoid of people, I took a casual stroll to unwind from the flight, passing by famous name brand stores, catering to those with deep pockets.

This area set the tone for tranquility.  Then it hit me – hunger pains and an urge to find Schnitzel.

Determined to seek out the best Schnitzel in town, I consulted the Hotel concierge who suggested “Zum Schiffchen,” the oldest restaurant/brewery in the city.   Armed with a map and his directions, I made a beeline for Dusseldorf’s old town, known as Altstadt.

WWII wreaked havoc on much of

, but the old town had been restored to its pre-war days.   Altstadt is billed as “the longest bar in the world,” as there are over 260 bars, restaurants, and breweries within one square kilometer.

Fortuna Dusseldorf, the local football club (soccer as we know it in the US) had won its match against Hannover earlier in the day.   Altstadt was beer deep into celebrating as I inched my way through crowds of fans toasting and singing, and waving me in to join them.

I was feeling the vibe of a city that loves its Altbier beer, a traditional top-fermented craft beer.

But I was on a Schnitzel mission and wasn’t about to be deterred by beer.

“Zum Schiffchen,” established in 1628, did not disappoint.  After a succulent meal of pork schnitzel, I was ready to wander.  It was a short walk to the Rhine River, which was swarming with people taking in the warm summer sun.

No one seemed to be in a hurry, and I took my cue from them, lollygagging along, savoring an ice cream cone, sitting for a spell and making the most of people watching. I could almost see myself living in this former fishing village. 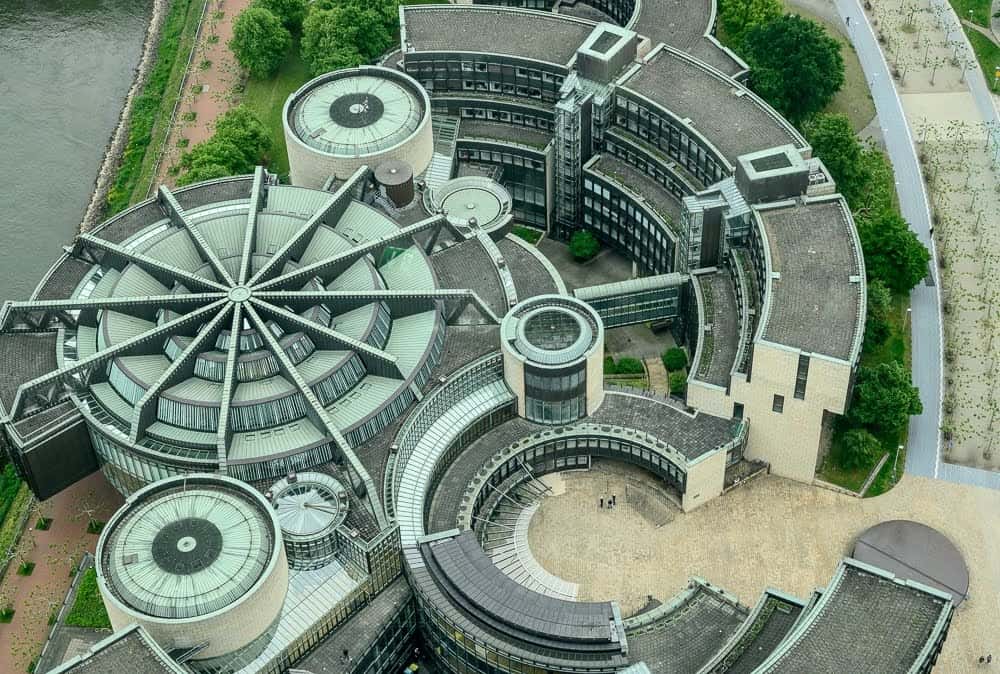 A short walk along the waterfront of the Rhine River found me at Medienhafen (Media Harbor).

At one time, the area served as a shipping port, lined with dingy warehouses.  This area had morphed into a sleek neighborhood where over 700 Innovative and creative industries call home.

The dominant feature along the harbor is architect Frank Gehry’s Neuer Zollhof buildings.  Built in the late 1990s, the twisted buildings folding onto each other are the most photographed subject in the city.

The concierge, seeing I had a camera in hand, had recommended heading up the city’s landmark, the Rheinturm (Rhine Tower) to get a bird’s eye view of Dusseldorf.

It was an easy walk from the Media Harbor to this communications tower, the tallest building in Dusseldorf at 789 feet high.  An observation deck at 551 feet, with a small bar, lent itself to a cappuccino pick me up!

In the rebuilding of the city after the war, noted architects such as Helmut Jahn, David Chipperfield, and Renzo Piano left their unique handprint on Dusseldorf, as seen from the tower.

The old and new of the buildings, blended so well together, painted Dusseldorf as a city respecting its history but not lingering in the past.

I opted to take another route back to the Hotel, and call it a day, this time backtracking through the old town, then taking the path through Hofgarten, Germany’s oldest park dating back to 1769.  Within the 70 plus acres, I passed by ponds, ducks, bridges, and ancient trees, and emerged steps away from my hotel.

With a new day, I was ready to see what Dusseldorf had in store for me.  I opted for an Urban Art Walk, led by Klaus Rosskothen, director of Pretty Portal Gallery.

Graffiti has a long history of being an eyesore found around the world in public places and usually created by people up to no good.

I appreciate the fact that graffiti has grown into a legitimate art form in cities around the world, including Dusseldorf.  In my mind, this street art adds a touch of class to public spaces and neighborhoods. It’s as though art has moved out of the confines of a museum and displays itself for all to enjoy.

Ko-Bogen, directly across from the hotel, caught my attention every time I had left the hotel.

With my visit to Dusseldorf coming to an end, I wanted to take a walk through “Ko,” as the locals call it.

Dusseldorf’s Gift to Me

Wandering into the complex, I came across Konditorei Heinemann, a magical and eye-popping confectionery that lured me in. I felt like Willy Wonka, who had the golden ticket to the magical candy store.

Among all the treats, I found my favorite – nonpareils (chocolate disks covered in sprinkles.  It was the perfect souvenir of Dusseldorf but quickly consumed before the day was over.

Dusseldorf gave me a break in the gentlest of ways from the sadness I left at home.

Public spaces in abundance, some of them emblazoned with street art, room to wander, plenty of Wiener Schnitzel, a very walkable city open to exploring, an abundance of down-to-earth, friendly locals.

I’m reminded of how powerful travel can be to one’s wellbeing.

Find out more about Dusseldorf at the city’s tourism website.