The Big Apple on a Budget

Think you know the Big Apple because you’ve “done” the Empire State Building, Statue of Liberty, Times Square and Central Park? Well, then you’ve only scratched the surface. With its five boroughs and countless neighborhoods, you can see a different New York each time you visit.

Fortunately, for my family, with a daughter who goes to school in New York, we have a good excuse to visit regularly. Our plans, the number of people traveling with us, and the length of our stay dictate whether we drive or take the bus.

Between gas, tolls, and parking, not to mention wear and tear on the car (and our nerves) using one of the low-cost bus lines that travel up and down the East Coast is often cheaper.

Prices for the affordable MegaBus and Bolt Bus lines that drop passengers at New York’s Penn Station start at $1. The earlier you book, the better your ticket price for the coach buses that generally run on time and include free Wi-Fi.

No matter how you get to the city, once you arrive, do what the locals do and travel by subway, buses, trains, taxis or walk. Each is a great way to see the city and capture its flavor.

The three-hour Circle Line cruise is a great way to get a different perspectiv?e of New York.

And, even though we’ve “been there done that,” we never miss an opportunity to walk through Central Park, Rockefeller Plaza and Times Square. You will always see something new or uniquely New York. Where else but Times Square can you see the Naked Cowboy?

A Three-Hour Tour
There are a million stories in NYC, and a local tour guide in NYC will share many great tales with you. It’s worth spending a bit for the insider knowledge a guide will give you.

Among the things that make New York so appealing is how vibrant the City feels all day, every day. Even if it’s not your first trip to the “city that never sleeps,” the whirlwind of people, traffic, horns and whistles can make it difficult to catch your breath and establish your bearings.

Anyone in mid-town Manhattan with a dazed look and a map will be handed a flyer for a bus tour of the city. The hop-on, hop-off feature of these double-decker buses can be useful, but they don’t take you off the crowded streets or paint the big picture of the City.

For a complete change in perspective, try the three-hour Circle Line boat tour. You will be amazed at what you will see and learn about New York’s past and present as you make your way along the three rivers that make Manhattan an island.

Starting at Pier 83 on West 42nd Street, adjacent to the aircraft carrier Intrepid, you’ll travel to Lower Manhattan and beyond Ellis Island for an up-close look at the Statue of Liberty.

The boat then heads up the east side of Manhattan, under the Brooklyn Bridge, past the United Nations and below the cable cars used to transport people to Roosevelt Island, a former asylum.

At the top end of the island, the boat squeezes through Harlem, past Yankee Stadium to the open waters of the Hudson River and under the George Washington Bridge, where a small red lighthouse sits, seemingly completely out of place.

At $35 per adult, the different views of New York, the exposure to the familiar and unfamiliar and the entertaining, live narrators make the three-hour trip worth the time and the money.

A Walk in the Park

It doesn’t have to cost a lot to visit New York. Looking can be as much fun as buying and there are so many opportunities to soak up the essence of city just by walking or strolling. Of course, Central Park is one of the most well-know spots, but there are others.

On Sundays, during the warmer months, stretches of the city are transformed into “pedestrian only” paths for street fairs or just the opportunity to bike, run, walk, or skate up and down the avenues.

More permanently, a bike path runs around most of the perimeter of Manhattan, and walking paths are popping up everywhere.

Leave it to New Yorkers to turn some of the most run-down, unappealing structures into trendy attractions.

One of the newest is the High Line, a park or walkway built on the elevated freight train tracks that once served the warehouses and factories in the Meat-Packing District. Currently, the narrow park stretches from below 12th Street to 20th Street along 10th Avenue, with future sections under construction.

The path is made of cement planks that resemble railroad ties, beside which native grasses, flowers and shrubs have been planted, reminiscent of the self-seeding plants that grew for 25 years on the abandoned rail line.

Below the High Line are numerous exclusive shops and restaurants as well as the Chelsea Market. The market, once the home of the National Biscuit Company, aka Nabisco, has retained its industrial feel while becoming a bustling retail food outlet with many one-of-a-kind shops.

If you like walking above street level, a stroll across the iconic Brooklyn Bridge is a must. Located on the east side of Lower Manhattan, just above the Financial District it is the one of the nation’s oldest suspension bridges.

Once you reach the other side, you’ll find plenty to do in Brooklyn, including the Brooklyn Flea Market held every weekend in two different locations.

The eclectic group of vendors numbers 150 on Saturdays at the outdoor market in Fort Greene and 100 on Sunday when the market moves inside the Williamsburg Savings Bank on Hanson Place. Both locations can be tricky to find by foot, but are worth the effort.

Want to try another borough? Consider an excursion to the Bronx. Not all the neighborhoods are sketchy; you just have to know where to go. The area around Fordham University has most of the highlights.

Traveling from the city, it is about a 20-minute train ride on the Metro North Railroad from Grand Central Station to the Fordham stop that drops you outside the gates of the college.

Cross over the busy Fordham Road, to Arthur Avenue, New York’s real “Little Italy,” famous for its fresh, hard-to-find ingredients and authentic flavors in the Italian market, restaurants, and shops.

The sights and the smells, which run the gamut from sausages and snouts at the butcher shop to conches and clams at the fishmonger, will transport you to another place and time. The tiny corner grocery store, Teitel Brothers, boasts four generations of quality and is jammed with traditional, fresh Italian delicacies.

Continue down Arthur Avenue beyond the playground where kids and strollers are as common as retirees and bocce to Tino’s. This deli not only carries fresh meats and cheeses, but the prepared gourmet food also makes it a popular stop for both college students and neighborhood residents who enjoy eating at the communal tables that spill onto the sidewalk.

Just beyond a few housewares shops, beauty parlors and bakeries is the Italian Retail Market. Unassuming on the outside, step inside to an old-world style market. From the vendors hand-rolling cigars just inside the front door, to the old men playing cards at a table tucked in the corner you’ll feel like you were in a small Italian town.

The market also features produce stalls, butchers, and of course vendors selling traditional pasta, ingredients for antipasta and sweets. Mike of Mike’s Deli located toward the back of the market does a vigorous business by tossing in some good-natured flirting with samples of meats, cheeses, and oils.

Within walking distance from Arthur Avenue are the Bronx Zoo and the New York Botanical Garden. Check out the websites for transportation options if you want to limit your walking to the attractions themselves.

Both the Zoo, the world’s largest in an urban setting, and the Botanical Garden with a dozen gardens and a conservatory, are located on more than 250 acres apiece and deserve a day each.

While both are open year-round, plan your visit to Botanical Garden carefully, as things literally die down in the dead of winter, and the popular train garden display sells out on the weekends during the holiday season.

Each time you visit New York, make plans to drill down, uncover another layer and discover something new. But, don’t forget to pass through your old favorite spots as they always offer something different. 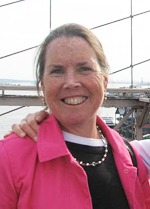 Meredith Bower, a freelance writer and mother of four, loves to travel and hopes to have instilled that passion in her family.

A Yurt Holiday on the Isle of Wight: Cheap and CheerfulBig

www.gonomad.com
This article was last updated Mar 11, 2020 @ 8:45 am
If we've inspired you to travel with this story, why not check out the prices to get there and make it happen. Search airfares, hotels, and rental cars here. Thanks!