Vietnam had thrown lots of surprises our way. Three and a half weeks in the country had taught us that it was better to go with the flow than to fight for an itinerary we’d mapped before ever leaving home.

For example, we hadn’t planned to spend any time in Mui Ne, a sleepy fishermen’s village turned tourist resort. However, our month-long tourist visa was about to expire and our flight out of the country was leaving from Saigon. The frenetic pace of the city, though, had worn our nerves. Mui Ne was an easy three-hour bus ride away and it provided the slower pace we were seeking. 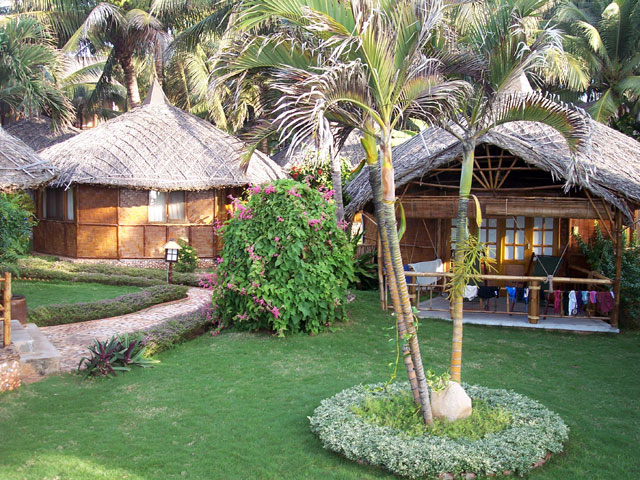 We knew exactly where we wanted to stay in Mui Ne: Bamboo Village. As budget travelers, Bamboo Village cost more for one night’s stay than what we were accustomed to paying for an entire week’s worth of lodging. However, we sprung for the big bucks, beachside villa because it was our wedding anniversary. 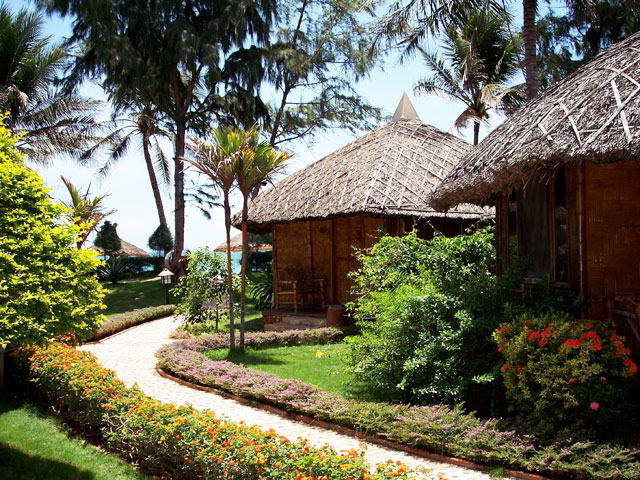 It was a decision we didn’t regret. Groomed pathways wound through the resort’s manicured grounds. 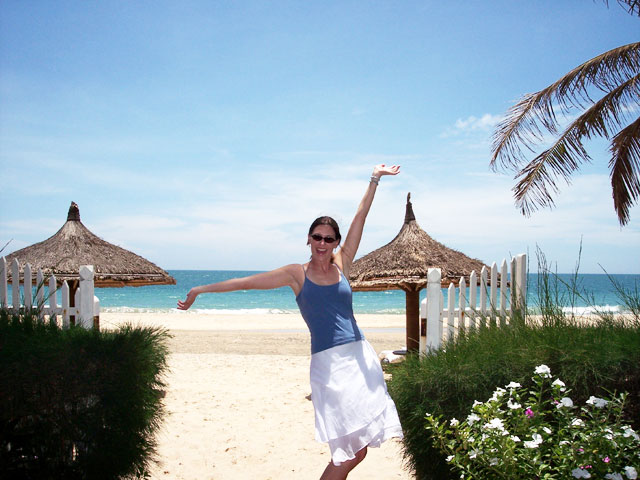 Even though there was a clean, clear pool on the premise, we preferred our view of the South China Sea, which was just beyond our room’s front door. 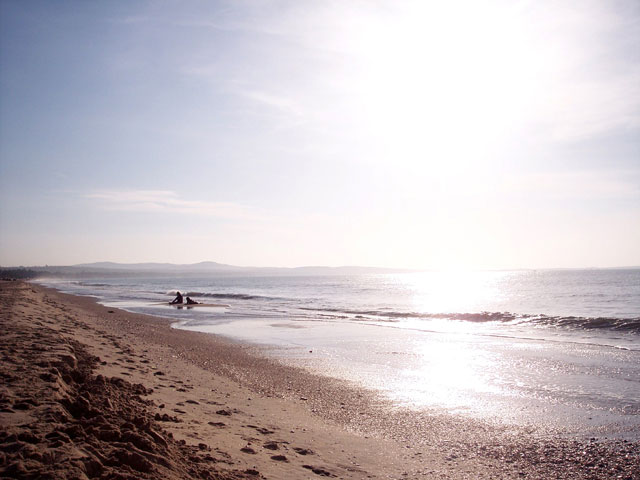 The beach in Mui Ne. Vietnam

We woke with the sun in Mui Ne and walked for miles on the beach, which we had mostly to ourselves.

After our beach combing, we’d lounge and gaze at the horizon. Eventually, the sun would get the better of us, and we’d head for a dip. The waves were pretty rough and we were glad for our collective comfort with the water. 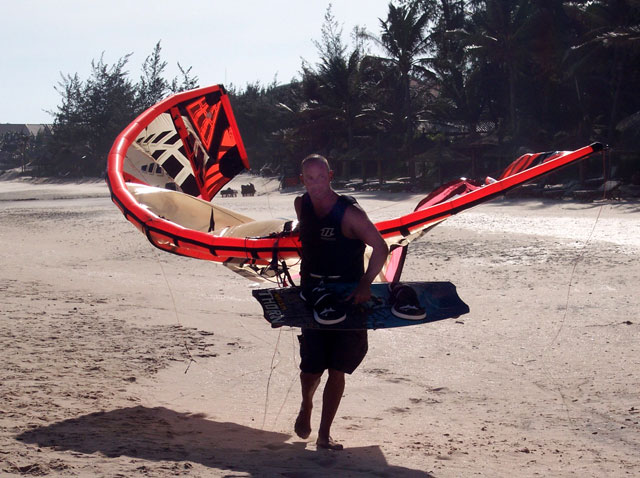 While the mornings were calm and tranquil, the wind began to whip every afternoon, kicking up sand and making the lounge chairs on the beach a little less pleasant. But a fair number of Mui Ne’s tourists relish the typically windy afternoons. 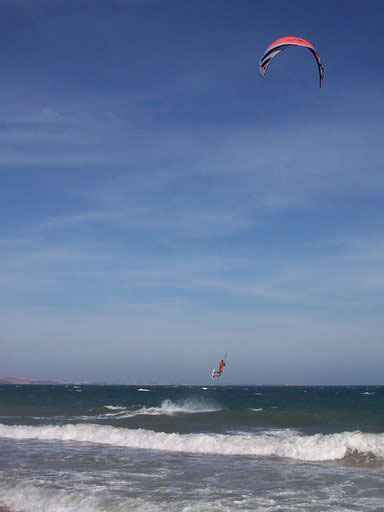 Sporty, sun-kissed surfer-types slip into wetsuits, hook up their bodies to parachutes, and head into the high waves for an adrenalin-pumped version of kite sailing. 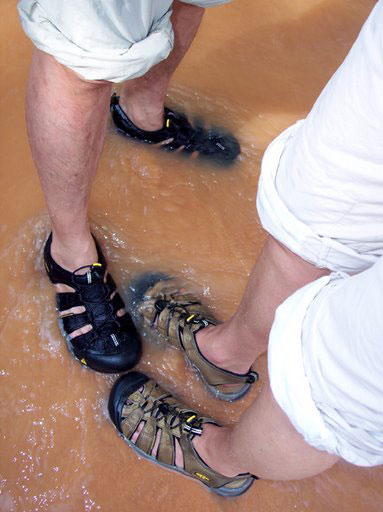 After two days of all-inclusive, resort-style vacationing, we figured we should get out of our swimsuits and see the world beyond the gates. A Jeep whisked us from the hotel strip and dropped us off at a red river. The driver pointed up the river, dug out a brochure from his pocket and pointed to a picture of a waterfall. We were to walk up the river and find this sight. We rolled up our pants, hopped in the water and were surprised to find it wasn’t very deep.

We made our way upriver, following what was called the Fairy Spring. At first, we walked through greenery on both banks, but soon the trees fell away on one side, revealing the source of the red sand. Burnt-red canyon walls of soft, crumbling rock rose into the air. On occasion, the canyon walls gave way to different rock formations that were eerily white next to the red, red sand. 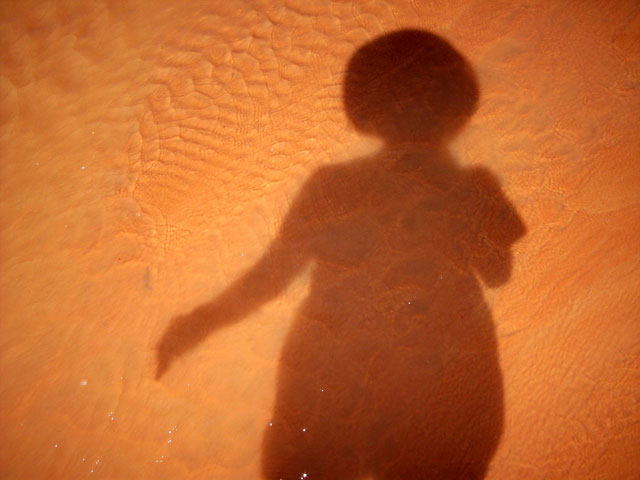 Shady spots were few and far between. So were other tourists. We started wondering whether or not we’d been sent down a blind trail. The red sand stream just kept stretching on and on. Where was this waterfall? 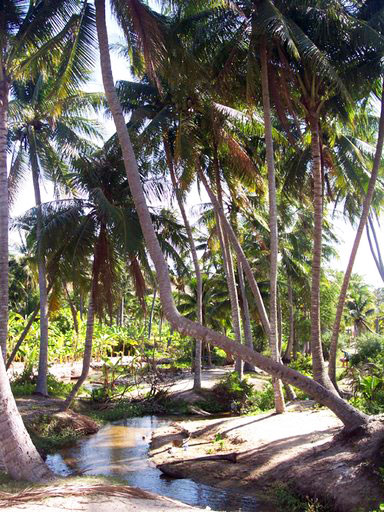 We caught sight of a trail leading up one of the river banks and guessed we were to take it. Finally, finally, we found some shade. And we finally found the waterfall. Sadly, it was an unimpressive dribble that we couldn’t see because so much vegetation was growing about it. We turned around and headed right back down that red, red river. 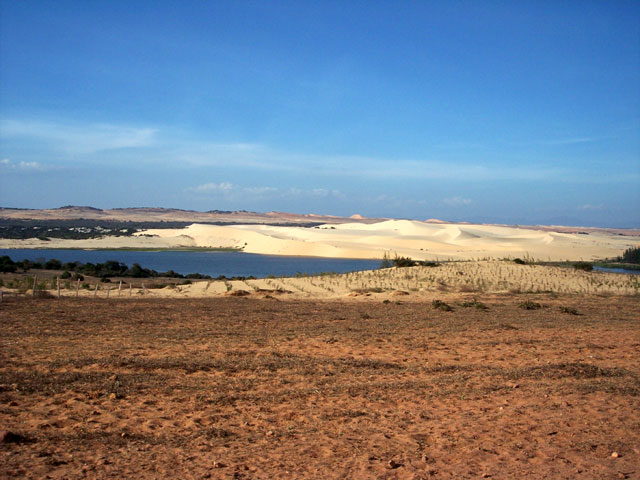 The next stop on our tour was an area of enormous sand dunes. We watched the dunes approach from the back of the Jeep. They glistened in the strong, afternoon sun. Sometimes they twinkled diamond white; other times they glowed a deep auburn. The dunes rose up out of — in all seriousness — the middle of nowhere and occupied the far side of a sapphire blue lake. 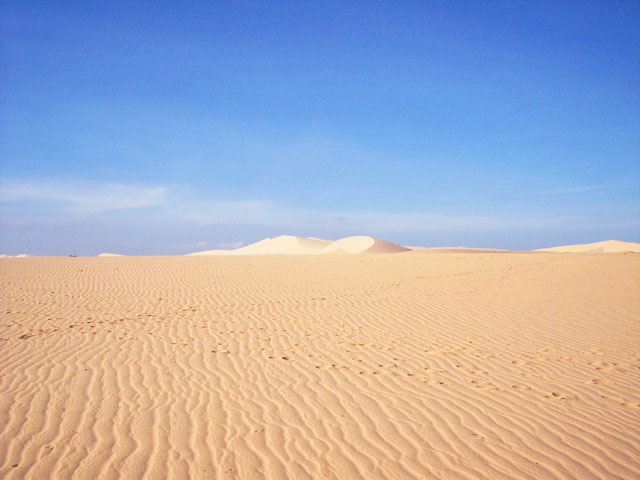 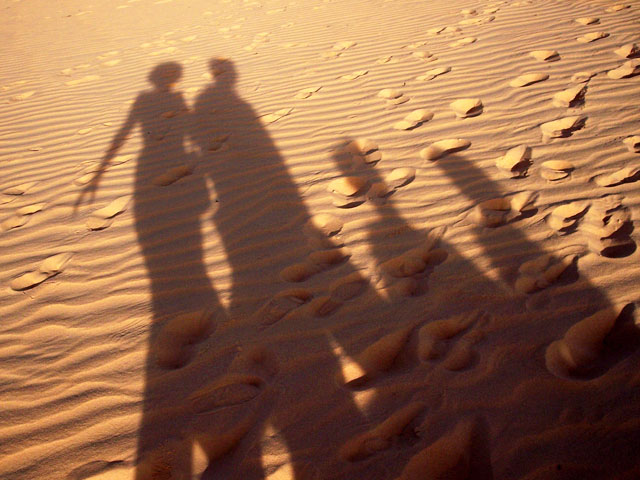 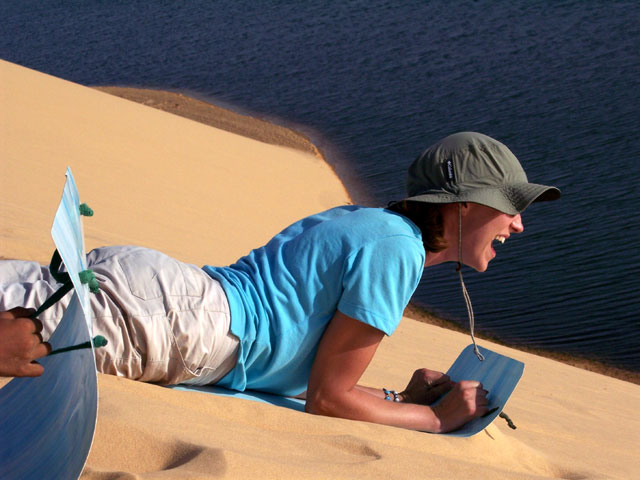 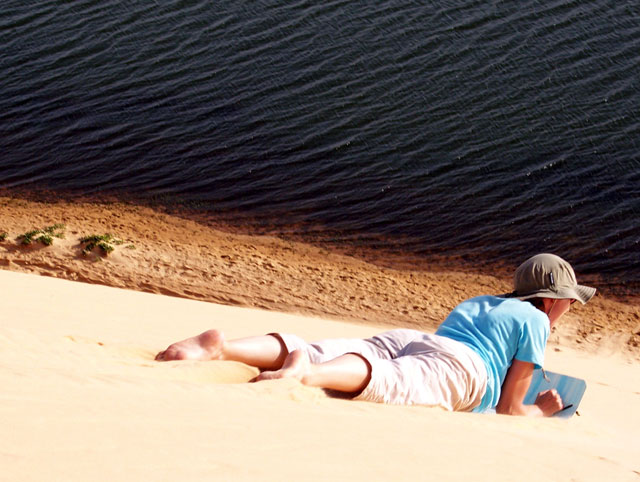 The hill was so vertical that if it had been of ice and snow we would have zipped down in the blink of an eye. Since it was made of sand, however, it was slower going, but not a whole lot. By dragging our feet in the sand behind us, we could somewhat control our speed. 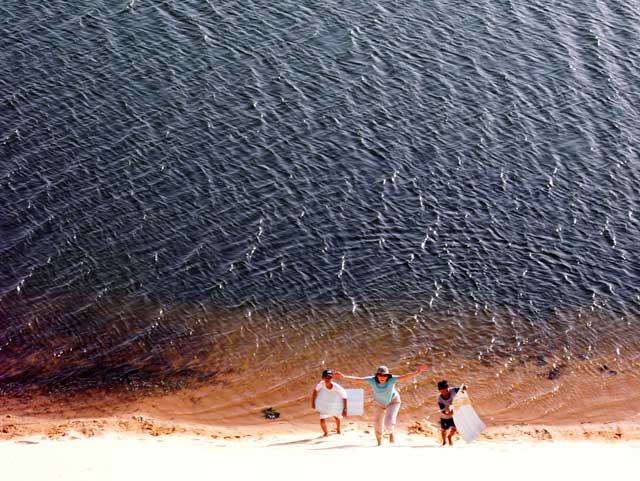 It was fun and we would have been tempted to do a few runs if climbing back up hadn’t been so hard. 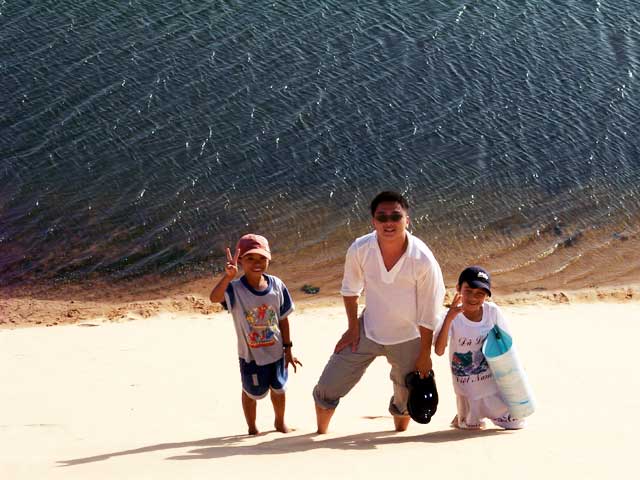 Our feet sunk in the sand and we were so completely winded upon reaching the top that we both doubled over and gasped, “I feel sooooo old!” 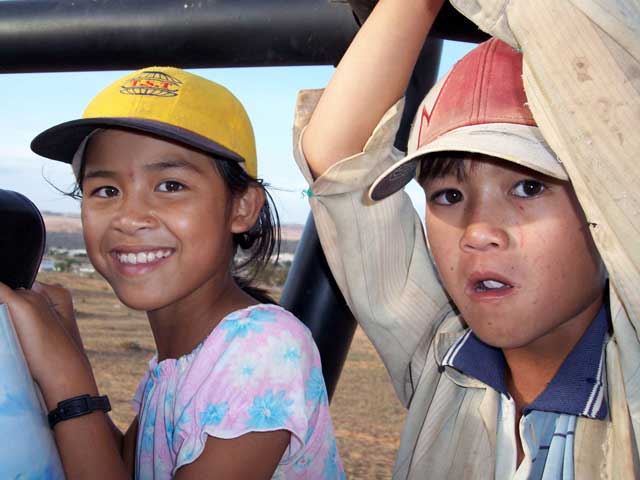 She thinks you’re handsome, answered another girl from across the Jeep. All the children broke into a fit of giggles while the smiling girl blushed and turned her head.

And then the Jeep suddenly stopped. The kids leapt from their spots, bowed deep traditional Vietnamese thank-yous, waved and ran off towards their homes.

And we sped off towards our home, too. We knew, of course, that our beach-side villa wasn’t really our home. We also knew that these past few days living the travel high life at an expensive Vietnamese resort were coming to an end; we were packing up the next morning. But for now, we were intent on enjoying it all.

Even though Mui Ne started as a fishing village, tourists don’t often stay in the original part of town. Instead, the beach — and therefore the hotels — are south of town and removed from village life.

This means both meals and accommodations cost more than they do in much of the rest of the country as the entire beach strip was built for tourists.

We stayed at the Bamboo Village Beach Resort and paid a hefty $70 US nightly price for a private, beachside bungalow.

The Hong Di Guest House, also on the beach, offered cheaper beds, some at $10 US a night.

We took a bus from Saigon to Mui Ne. It was a pleasant three-hour drive on a smoothly paved highway that cost about $ 7 US. 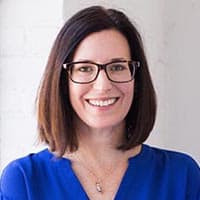 kellywesthoff.com
If this story has inspired you to travel, why not check out the prices to get there and make it happen? Search airfares, hotels, and rental cars here. Thanks!