Getting mugged and nearly molested by a troop of monkeys isn’t everyone’s idea of holiday fun.

But the volume and persistence with which Jaipur hawks its forts and palaces can sometimes make you sick enough to sell yourself ‘very-nearly-catching-rabies’ as ‘breakaway adventure’.

I am at Galta, a hill shrine established by Rao Kriparam, a courtier of Maharajah Sawai Jai Singh II. The place itself sits 10 kilometers (6.2 miles) away from the picture-book Pink City. But in it, when surrounded by desperate, desperately hungry primates, I am a million miles away from everything the adverts want you to believe.

Galtaji, as it is reverently referred to, calls to different people in different voices. Devotion brings some to the Sun Temple built in the 18th century. Awe draws others to the panoramic view-points overlooking Jaipur that dot the hill.

A want of choice sees uniform-clad schoolchildren being ferried in as part of the token exam-ending picnic. A morbid fear of Rhesus macaques is what has brought me here.

It is early evening as I drive through the 50-foot high gateway that serves as the mouth to Galta. Astride the family’s 1980 Royal Enfield motorcycle, I am a picture of renunciation. I have chosen against bringing the usual tourister equipment – no guide book, no maps, no bottled water. All I have brought is bait. Tied to the back of the motorcycle is a gunny sack containing four kilos (nine pounds) of fruitfly-ridden, dirt-cheap overripe bananas.

There is a turn on this one-car-wide uphill drive which leads to why most people come to Galta – the temple and its rather magnificent complex of bathing tanks, fountains and frescoes.

Humans bathe in the upper reservoir, supposedly ‘two elephants deep,’ while the lower half-elephantly one caters for the other dominant primate here. Both are constantly replenished by spring water flowing from the mouth of a marble cow built around the wellspring.

I make sure to miss that turn and keep climbing.

The higher up you go, the worse the path gets. It thins and the tiles turn older and more worn out. Cowdung cakes to be used as fuel by the locals are left to dry everywhere, and acacia juts through the now broken walls of the trail.

After a good forty minutes of dodging cattle and the people feeding them, of watching concrete slowly but surely loose the battle to thorn bush, and of steering through an ever-thinning obstacle course of vendors peddling everything from chewing gum to chillums, I am somewhere that feels far enough.

I park the motorcycle next to what is the eighth temple I’ve passed along the way. The last person I saw was a very obviously stoned priest a good kilometer back. But I am by no means alone. The smell has brought them here.

The Ghost of Primates Past

At the age of five, I was bitten on the arm by a Rhesus monkey. It was a grizzly affair, culminating in a violent storm of mercurochrome and rabies shots. The ordeal laid the foundations for my lifelong fear of the animal.

It is said [conservationist Jim] Corbett first strode into Champawat to kill both the local man-eater, and his dread of all man-eaters. My journey to Galta has been undertaken in somewhat the same spirit.

The Rhesus monkey is Darwinism at its twisted worst. It is agile and hardy, breeds all year round, and will eat just about anything. The only primate alive with a wider area of distribution than the Macaca mulatta is man. It can even survive a ridiculous amount of G-force – a series of Rhesus monkeys, all named Albert, were the first of our simian clan in space.

The species forms the mainstay of most scientific research – the human blood group system was understood through and the polio vaccine developed by research done on them. In the 1970s so many of them were being exported as laboratory subjects that the resulting dip in population led to a ban on their capture and sale. Their numbers have, since then, risen again.

And India is where the Rhesus is most at home. It has more of these monkeys than most Caribbean countries have people.

Right now, from where I’m standing, that isn’t necessarily a good thing.

In less than ten minutes, I am surrounded by a troop numbering at least thirty animals. For what seems like forever, nothing happens. They sit at a safe distance all around me and this stash I’ve brought, watching.

The stalemate is broken by the confidence of youth. A juvenile critter about the size of a malnourished cat creeps cautiously forward, eyes on me at all times, and reaches inside the bag I’ve offloaded and opened. Grabbing the first festering stump of fruit he can find, he races off onto a nearby rock.

That I didn’t beat his head in and just let him take the banana is seen as an obvious sign by all the others. In a matter of seconds, the jute sack is a vague memory. Monkeys of all sizes and shapes, some too young to swallow a banana and others too old to chew one, squabble over the loot. The placid evening is transformed into a riot of screeching, sparring and shoveling in fruit.

Size has little to do with clout, for some of the smaller animals make away with far healthier helpings than the troop’s fat elderly. Perhaps because there’s so much to go around, perhaps because that’s just the way things are done, no actual fighting takes place. Yes, there is plenty of baring of teeth, but all is given and taken in the right spirit.

Four kilos turns out to be a lot of near-rotten banana. As the feast stretches on, the troop disintegrates into a bunch of overfed gluttons. There are monkeys with bloated abdomens lolling about all over the place, and banana peels as far as the eye can see. It is a banquet scene out of the ancient Roman version of The Planet of the Apes.

I stand unharmed but very alone in the center of this lull after the just concluded gustatory storm. These being monkeys, I didn’t come expecting any actual gratitude, but unfed, ignored and unappreciated, I cannot beat back the ‘cheated’ feeling.

Everybody’s Lolling on Their Sides Except Me and My Monkey

I feel like sulking a little. The motorcycle is occupied by a balding monkey on the verge of vomiting, so I go sit on the wall instead.

Just then, a young freakishly thin imp comes and sits down next to me. By all estimates, he too is the size of a malnourished cat and looks to be the same animal who’s fearlessness launched the attack on the gunny sack. But these being monkeys you can never tell. He stares at me with eyes the size of swollen grapes, racked with the same trepidation as earlier. Perhaps as an offshoot of his loaded gut, his biscuit sized face is painted the color of … gratitude?

In a Dian Fossey-esque act, I reach my hand out and pat his head. He just lets me do it. It is seen as an obvious sign by the other monkeys that can still walk.

Ten minutes later, I am surrounded on all sides by monkeys of all shapes and sizes, my right hand still has all five fingers, and my new monkey friend has a well massaged scalp to go with his full stomach.

It is one of those moments that prove that this is indeed the most amazing country to be alive in.

The sun begins to set over Galta. All of us are treated to that glorious panoramic view of Jaipur most people come here to see.

There in the dusk, the silhouette of me with my hand on the head of a small monkey against the setting sun would have made for a fantastic photograph. But it didn’t. Everyone there was too wasted on fermenting bananas to have actually taken a half decent shot. 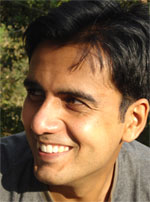 Ashutosh Ratnam is a 28-year-old dilemma-ridden doctor who tries to potion his confusion with writing, reading and rock and roll. He writes a blog entitled Postcards From Paranoia.

Travel As Education: A Mom's Year on the Road with Daughters
Peru: A Strong Connection to the Earth
Walking Toward that Privileged Moment
Rome: Where the World Has Moved
Running with Gazelles in Morocco
Ethiopia: Nightlife in Harar