I wanted to get away. Really away. Having just graduated from college, I was ready to relax and relish the free time that spread out before me. So I grabbed my boyfriend Ty and we started driving north.

Our destination was Rockland, Maine, the docking place of the windjammer Nathaniel Bowditch. This being my first summertime visit to Maine, I wanted to experience the state’s craggy coast the way it was meant to be seen — from the water.

The most authentic way I could find to achieve this goal was a trip on the Nathaniel Bowditch, one of Maine’s beautiful windjammers. At 82 feet long, the ship is an impressive sight, and we were lucky enough to call her home for six memorable nights.

The Maine Windjammer Association hosts a fleet of twelve vessels, each ship with its own unique history. The Nathaniel Bowditch was originally built as a racing yacht, and took special class honors in the 1923 Bermuda Race.

Sailing is a way of life for many who inhabit Maine’s shores—I couldn’t wait to get out into open water.The windjammer is currently owned and operated by Captain Owen and Cathie Dorr, who run all-inclusive sailing trips from late May through mid September, ranging in length from two to six nights.

All Hands on Deck

We boarded the Nathaniel Bowditch on Sunday evening along with the other 15 passengers that would be making the journey, and after spending the night tendered to the dock, we shipped off early the next morning.

When you’re setting out to sail on a windjammer there’s a lot to do in a short amount of time. On the Nathaniel Bowditch passengers are encouraged to help out in any way they can—after all, it’s a big ship with only three crew members.

Depending on preference and ability, we helped crank up the anchor, lower and raise the main and fore sails, and coil up the ropes.

The crew provides a wealth of sea-faring knowledge and if a passenger wants to climb up the rigging, they’re more than willing to instruct (to earn that privilege, one has to memorizes the names of each line on the sailboat and learn a few basic knots.)

Then, we were out at sea and all bustling activity on the deck came to a stop. The crew took up their positions and the rest of us were suddenly surrounded by endless blue sky and sea—with nothing to do but enjoy ourselves.

When you’re traveling on the Nathaniel Bowditch, you have plenty of time to do anything you want—read, nap, play card games in the galley—or nothing at all. Your time is your own and is punctuated only by the breakfast bell at 8 AM, the lunch bell at noon, and the dinner bell in the evening.

Bring along one or two absorbing paperbacks—good reading material is a must. With no cell phone service or internet for miles and a breathtaking view of sky, sea, and coastline, you leave all ties to the ‘real world’ blissfully behind.
\

My favorite spot on deck was on the roof of the galley, just forward of the helm. There I could lay on my back and look up at the sky through the flapping sails. I would sun bathe, read, nap, and let my mind wander—until I caught a whiff of the meal our chef Paul was cooking up.

The food on the Nathaniel Bowditch is nothing short of habit-forming. Paul made incredible amounts of hearty comfort food appear from a tiny galley and he didn’t take any shortcuts—homemade breads were featured daily during our on-deck lunches, paired with delicious soups like vegetable stew with barely and biscuits.

Having grown up with his brother Captain Owen on one of the remote islands off Rockland’s coast, Paul was taught to create satisfying meals from local produce by his mother at a young age. We were treated to delicious strawberry shortcake on our fist night which Paul had made using fresh ingredients from the family garden in Rockland—it was the essence of summer and was my favorite dessert of the entire trip.

The crew and passengers dined together buffet-style up on deck whenever the elements permitted, making for a beautifully peaceful eating experience. When the weather was too cold or misty (we were sailing during a temperamental New England June), the group of us would fit snuggly into the warm galley to devour our meals and trade stories.

Each meal outdid the last, and the dinner that marked our last on the Nathaniel Bowditch was my absolute favorite—rosemary roast chicken and wild mushroom polenta with truffle oil. We ate on deck in a small cove where a few other windjammers had dropped anchor for the night, enjoying the quiet stillness and relishing our last evening on board.

Paul is a wealth of knowledge and is happy to share tips—he told me about a great substitute for truffle oil and introduced me to noodle kugel, a savory and sweet variation on the traditional Jewish dish.

I’ve tried a few times to recreate the heavenly last supper from that night in my own kitchen, but nothing can touch Paul’s perfection. His cooking, along with Captain Owen and Cathie Dorr’s hospitality and warmth, are what makes a trip on the Nathaniel Bowditch so special.

You can’t come to Maine without eating lobster, and when you’re sailing with the Maine Windjammer Association, a traditional New England clambake is always part of your all-inclusive sailing trip.

Luckily for my fellow passengers and me, we were on a special voyage that took place during Boothbay Harbor’s famous Windjammer Days festival.

While most Nathaniel Bowditch trips set up impromptu clambakes on the shores of uninhabited islands, we were treated to a Cabbage Island Clambake by the Windjammer Days group of Boothbay in honor of our celebrated sailing vessel.

We arrived by dingy to this 5½ acre private island, located in Linekin Bay, just a short distance from Boothbay Harbor. I noticed the mouth-watering smell of shellfish from the dock, and instantly went to investigate.

This is the real thing—and I have never seen it done in such epic proportions. The clambake was laid out by the water’s edge, where four or five massive pots were boiling away. Above, piles of steamer clams, foil-wrapped potatoes, hard-boiled eggs, onions, corn on the cob, and two-pound lobsters were steaming to perfection in between layers of seaweed.

We were served our sumptuous meals, including New England clam chowder and blueberry cake for dessert, by friendly Navy sailors who were stationed nearby in celebration of Windjammer Days. Our group enjoyed the buttery, amazing meal in the island’s cozy guest lodge, eating until our bellies were stuffed full of briny Maine goodness.

The Windjammer Days festival takes place every summer at the end of June in Boothbay Harbor, and celebrates the local heritage of the storied tall ships.

The highlight of the festivities for many is the arrival of the windjammers themselves to the harbor, and being on one of these national treasures as it sailed into dock was a moment I’ll never forget.

Hundreds of people were crowding Boothbay harbor to enjoy the sight of four century-old tall ships take part in a Parade of Sail.

Fellow Maine Windjammer Association vessels the Heritage, the Lewis R. French, and the American Eagle accompanied the Nathaniel Bowditch in to the harbor, where we dropped anchor for the night, some rafting up together, side by side.

There’s a lot to do in Boothbay Harbor, especially during the Windjammer Days, when the small seaside town fills with visitors to celebrate the old schooners and the arrival of summer. We were docked right off the town landing, in the middle of it all.

After settling in, we were ferried to shore by Captain Owen in the Nathaniel Bowditch dingy. Ty and I strolled around Boothbay and explored the local shops, though we had no need to splurge on an expensive meal because we knew that Paul had something amazing cooking back on our schooner.

We took the footbridge across the harbor and poked around the more residential side of the cove before returning to find the ice cream stand that offers fresh Belgian waffles, which Allie the crew member had raved about.

As luck would have it, the establishment—the Downeast Ice Cream Factory—sits right at the end of the footbridge. We shared a tasty waffle sundae which was the perfect snack to hold us over until six that evening – we didn’t want to miss Paul’s exquisite hors d’oeurves.

Back on the ship, we dined on appetizers of cream cheese spread with apple compote and summer sausages with spicy homemade mustard. The group enjoyed these treats and a few cocktails up on the deck, and as I sat enjoying the view of the bay at sunset I couldn’t help but think “So this is how the other half lives!”

When You Go to Sea in a Windjammer

The Nathaniel Bowditch provides its passengers with a detailed informational package before the journey, but I’ve compiled my own list of essential items to bring along on your trip:

For more information about sailing on the Nathaniel Bowditch, and the Maine Windjammer Association, visit
Windjammer Vacation
Sail Maine Coast 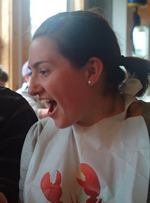 Isadora Dunne was an intern with GoNOMAD during the 2008 school year when she attended the University of Massachusetts. She now lives and works in Boston.