Way, Way Down Under: An Antarctic Safari 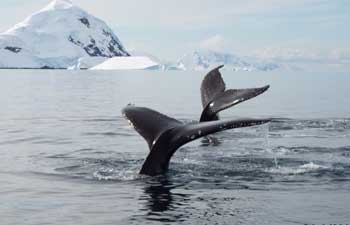 A Safari in Antarctica: Penguins and More

Penguins are happier than clams. Now I know why.

Antarctica is a frozen otherworld safari without borders. A (Quark Expeditions) Russian icebreaker introduced me to the earth’s overwhelming polar underside: stadium-sized, sculpted blue and green icebergs drifting past thundering, skyscraper-height glaciers calving over jagged, rock mountains into a sea of breaching whales and affable penguins.

The planet’s final frontier is 1.5 times larger than the United States, and that circumference doubles during the winter freeze. Its ice sheet is the earth’s largest body of ice – an area of about 13.3 million sq km – formed through snowfall accumulating and compressing over millions of years. It holds ninety percent of the earth’s ice and seventy percent of its freshwater.

At its thickest, the ice is over 2.8 miles (4.5 km) deep, a colossal cap covering the continent and exerting massive influence on world weather, substantially more than the arctic ice cap. The Arctic region/North Pole is ice floating on an ocean and, by comparison, has half the ice.

Here, there are birds that can’t fly (penguins) and mammals that can’t walk (seals); a pollution-free environment where the wildlife returns your ogle. There’s no native population, so any environmental degradation is caused solely by outsiders. With limited history of abuse – excepting whalers and seal clubbers active until the mid-1900’s – animals don’t fear humans.

Wildlife endures unimaginably harsh climate conditions. Only two percent of its land is not covered by permanent ice, and that’s where 16 of the 17 species of extremely tolerant, upright ducks colonize and nest during their short summer vacation. (Penguin species number seventeen claimed the Galapagos).

The UN-sponsored, 1959 Antarctic treaty mandated that everything south of 60-degree southern latitude may only be explored for peaceful purposes: no hunting, fishing, industry, exporting, oil drilling, or weapons testing. Mingling with penguins, however, penguins willing is permissible.

Floating into this winter wonderland of crystal glacier palaces is a powerful sensory overload. Amazingly, Antarctica’s February daytime temperatures were warmer than New York’s, with the mercury rising above freezing and sometimes into the 50s.

Serrated, Rocky Mountain-style geology juts up from the ocean, with quarter-mile thick glacial shelves creeping though their valleys and slowly but surely spilling like frozen waterfalls into saltwater.

In the midst of it all, there are beaches where several Zodiac excursions make landfall daily. One stopover was on a bleak, disused whaling station.

Every other landfall was absolute splendor. A privileged guest on solo hike, I met three thousand Gentoo penguins quacking like an army chorus of kazoo trumpets, flapping their wing-fins aimlessly and showing off their regal posture.

A few of them napped. The kazoo/quack soundtrack melded with whimpering seals, yapping arctic gulls and terns, the thunder of fracturing glaciers, and the steam-release phish from whale blowholes. Whalebones were scattered on the beach as far as the eye can see.’

At first, this colony of Gentoo penguins seemed to be only spying their omnipresent foe, five fur seals snoozing on five nearby boulders. Strolling calmly and keeping a respectful distance invited them to waddle within a foot of my seat on a rock, return my stare, and inspire a peak wildlife encounter.

Penguins cleverly tackle issues with the highest emotional temperature, like tag. Don’t drop off at the back there – it gets more interesting. Though they can outrun most humans, they seem a tad goofy on land.

But with their wings evolutionarily transformed into flippers, penguins are bird group best adapted to aquatic life. They are incredibly efficient swimmers and divers who feed in high seas, so they are, in a way, fish out of water while waddling around their coastal nesting colonies.

In Darwinian terms, these frequent games of tag are actually parents running away from two or three closely pursuing, hungry chicks to see which one is stronger and faster (or hungrier), and more likely to survive the winter.

The reward for determined tag victors, winner of the selection procedure, is mom or dad regurgitating a snack in their mouth. Sometimes a sprint-waddling parent or chick trips and falls forward onto their belly and immediately initiate a paddling motion to maintain their same speed as paddling toboggans on the snow or ice. Mother Nature’s least remunerated entertainers are also the ultimate survivalists.

In their first summer of life, these black-and-white suited comedians molt: stand around waiting for their new suit to arrive, i.e., shed fluffy baby feathers and grow into waterproof skin. They stand around leisurely shooting the breeze, it seems, accepting your decision to do the same thing.

Photographing penguins is similar to focusing on a moderately amused child: you lose them if you break the spell.

The 800-mile (1,287 km) peninsula pointing at South America is a small segment of the continent that’s flanked by hundreds of islands and numerous varieties of penguins, seals, whales and sea birds, all reveling in summertime glory.

The peninsula has a volcanic granite mountain spine the result of the same geologic process that wrought the Andes. This peninsular “tail” interrupts the continent’s otherwise almost perfectly circular shape.

Visitors are urged to maintain a respectable fifteen-foot distance from all wildlife (I respected this, but didn’t shoo curious visitors).

Territorial fur seals would first bemoan my presence by whimpering like cold puppies. The protest mounted with throaty, menacing growls and culminated with mock lunges and wompy gallops toward me. I’d witnessed several mock, snarling, biting and head-whacking wrestling rituals, and when one of these 300-pound beasts made a few thumping gallops in my direction, I ran.

So walk, bike, carpool, recycle, don’t spray aerosol, and visit Antarctica when you can, because it all starts with you. It takes a while to adopt an Antarctic way of thinking. It’s not about wildlife noticing or attacking you, it’s about how your presence, and environmental insensitivity, affect them.

Your mind wanders during ice time. Caught in this argument for the ages, I said “wait” to no one in particular. At that, the penguin before me nodded to his pal, quacked in my face, spun on a heel, and waddled away to resume holding court by whalebone.

Quark leases small, Russian-crewed vessels; Russians are the world experts in polar navigation. Boats are designed to navigate the remote corners of the Antarctic Peninsula and take adventurous travelers to extraordinary places inaccessible to other ships.

Quark’s expedition professionals, including a medical doctor, geologist, naturalist, and maritime historian, are an eclectic group of PhD-caliber experts from Canada, Australia, New Zealand, the UK, Sweden and the U.S. Their in-transit lectures are outstanding. The expedition leader had worked on an Antarctic research base for several years.

The Professor Multanovskiy is a 235 x 42-foot (71.8 x 12.8m) Russian icebreaker-strengthened class research vessel that’s been modified into a passenger boat. An open bridge policy means guests are welcome in the ship’s bridge, day and night.

And you won’t go hungry, with daily entrée options of fish, meat, and vegetarian, plus salads, soups and tea time.

If you’re prone to seasickness, get an inexpensive prescription for the Scopolamine patch, a penny-sized band-aid that sticks behind your ear and delivers three days worth of anti sea sick meds.

Mother Nature requires that itineraries remain flexible; a sunny day can turn into a killer blizzard at the drop of a hat.

Fly LAN Airlines to Ushuaia, Argentina – the gateway to Antarctica – and take advantage of your stopover in Santiago, Chile. LAN flies daily from JFK to Santiago, and from Santiago to Ushuaia four times a week, the last stop before sailing to Antarctica. (866 435 9526)

Santiago’s “Pio Nono” is a street lined with sidewalk-seating restaurants, bars, and the city’s progressive edge. This strip delivers optimum views of the Chilean Chillout, which usually includes warm greetings and cigarettes. The jazz club strip is two blocks away; a favorable exchange rate makes stepping out here very affordable.

Stay at the Hotel Orly, a quaint, compact, Euro-style building in an upscale neighborhood hugging Avenue Providencia, a Broadway-style shopping thoroughfare with alleyways leading to authentic pubs. This experienced, trusty “Bellavista Zone” hotel is ideal for both first-timers and Santiago vets.

The Ritz-Carlton Santiago is a 205-room champion of luxury and convenience in Chile’s most impressive neighborhood, El Golf. Surrounded by the pulse of a modern and friendly capital city and within walking distance of boutiques, restaurants, and entertainment.

It’s also a short drive from funky student areas, epic Pacific surf, or recreating in the looming Andes Mountains. Their huge, divinely appointed rooms have grand views of this sprawling urban landscape. The lobby recalls a bygone era of royalty or the nicest living room you’ve ever visited, and the in-house restaurant and bar redefine refinement. (800-241-3333)

For more information go to Visit-Chile.org.

Ushuaia, Argentina, the southernmost city in the world, is one of those earthy, likable, expedition-primer towns on the edge of natural wonders. This busy, always windy port on Tierra del Fuego’s Beagle Channel – where the Atlantic meets the Pacific – hosts a medley of outfitting shops, restaurants, and bars for travelers prepping for, or rejoicing an adventure in the mountains or a sail to Antarctica.

The main drag (St. Martin) has something for everyone: expensive jewelry shops at one end and the naval base-inspired red zone at the other end. Refreshingly, Ushuaia still clings to its frontier town roots.

Pretty much as far off-Broadway as a theatre can be, La Aventura del Beagle is a play in a theatre within a ship’s interior that’s attached to an amusing theme bar/restaurant.

A tad hokey, this unashamed performance is a worthy, end-of-the-road outtake tracking Darwin’s first geographic reconnaissance under the command of Captain Fitzroy.