Winslow, Standing on the Corner, and La Posada

“Well I’m a-standin’ on the corner in Winslow, Arizona, with such a fine sight to see.
There’s a girl, my Lord, in a flatbed Ford, slowin’ down to take a look at me…”

It’s trivia question time. Who made the town of Winslow, Arizona, famous in the 1970s? If you answered The Eagles, you’re partially right. It was actually Jackson Browne who wrote the lyrics for the Eagles’ 1972 hit song, “Take it Easy.”

Glenn Frey wrote the music and, if he had also written the lyrics, he might have made some other town famous like Flagstaff or Chinle. But he didn’t, and Winslow will be the capital of Take-it-Easy-land forever or until everyone forgets the song whichever comes first.

On the last weekend of each September, Winslow hosts the Standin’ on the Corner Festival, a two-day party that features Eagles tribute bands, food, arts and crafts and a general celebration of ease-taking in all its various forms.

Thousands of tourists pass through Winslow every year, some following the path of the fabled Route 66, others just wanting to get their picture taken on a corner.

To help these Eagles fans out, the town has designated a particular corner to be THAT corner. A bronze statue of a young man with a guitar stands in front of a mural that shows the fabled girl in the flatbed Ford.

Winslow is and always has been a railroad city. Most of its 10,000 residents work for one of the railroads that pass through town.

Originally founded in 1881 by the Atlantic and Pacific railroad, which chose the location because of the ready supply of water for its steam engines, Winslow has been growing steadily. It’s located just a short drive from many of the region’s most popular attractions.

Twenty miles west, the “World’s Best Preserved Meteorite Crater” is fun for the whole family or you might enjoy a trip to the Petrified Forest or the Hopi or Navajo nations.

A full-service tour company like Detours can help you plan your itinerary and provide you with knowledgeable guides to make sure you get the most out of your visit.

In downtown Winslow, the Old Trails Museum has a great collection of historical artifacts and the Lorenzo Hubbell Trading Post has been converted into a Visitors Center where you can see the “Tribute to Tribes and Traders” exhibit which tells the story of the bustling trade in native American arts and crafts and the impact that trade had on the tribes and the neighboring communities.

No matter what brings you to Winslow, make sure to visit the town’s crown jewel, the La Posada Hotel.

One of the last Harvey Houses, La Posada was built in 1929 under the direction of America’s premiere woman designer, Mary Colter who considered this hotel to be her masterpiece. Colter is well known as the architect of many the buildings in the Grand Canyon: the Hopi House, the Watchtower and the Bright Angel Lodge are just a few.

These days we see southwestern design motifs everywhere, but in the early 20th century, when everyone thought all great design ideas came from Europe, Colter’s use of indigenous forms and styles was revolutionary.

Her success in designing buildings for Fred Harvey, the man who “civilized” the west by bringing fine dining to railroad travel, allowed her more and more creative freedom.

For La Posada, she designed everything, right down to the ashtrays that stand in the lobby, the plates on the dining room tables, even the maids’ uniforms, according to her vision of what the Hotel should represent.

La Posada was designed in the 1920’s to look like it was put together bit by bit by a Spanish family over 100 years.

She describes in her “fantasy” a fictional history of the building from the first Don and Doña who “arrived in the early 1800’s with a collection of books and exotic birds” through four generations of the Pajaros clan, each adding – in Colter’s fantasy – different wings and floors to the building according to their particular taste.

Colter’s vision was a success – La Posada lives and breathes its fictional history and delights guests who take the time to wander through the grounds – but her timing couldn’t have been worse.

When the building was finally finished, America was foundering in the Great Depression. It finally closed to the public in 1957 and was converted by the Santa Fe Railway into offices for their regional headquarters.

In 1997, when the hotel was listed on the endangered list of the National Trust for Historic Places, La Posada was purchased by Allan Affeldt and his wife Tina Mion.

With some help from Arizona State Parks Heritage Fund and the Arizona Department of transportation, Allan and Tina put their heart and soul into the restoration of La Posada, removing the acoustic tile ceilings and other leftovers of its days as a 1950’s corporate office building, and turning the hotel into a living museum and a tribute to the genius of Mary Colter, who died in 1958 believing her masterpiece would be torn down.

The living history of La Posada is preserved by the “Harvey Girls,” Winslow residents who dress in the traditional black and white uniforms worn by the women who served the food in Paul Harvey’s famous restaurants.

You’ll hear the story of Harvey’s dissatisfaction with his drunken and brawling male employees and the now-famous ad he placed in newspapers around the country, “Wanted: young women, 18 to 30 years of age, of good character, attractive and intelligent, as waitresses in Harvey Eating Houses in the West. Good wages with room and meals furnished.”

Thousands of girls left their homes in search of adventure and the wages, which – for the time – were quite generous. They lived in dormitories and were forbidden from becoming engaged, though many women broke that rule.

The Turquoise Room, the restaurant at La Posada, delivers four-star cuisine, some of the best available in all of Arizona.

You can wander the halls decorated with Tina Mion’s artwork (photographing the paintings is not allowed) or browse the gift shop that features reproductions of many of the items designed by Ann Colter for the hotel.

Amtrak trains stop at the station just outside the rear entrance of the hotel making La Posada a destination for train travel enthusiasts.

For more information or to plan your trip, contact the Winslow Chamber of Commerce. 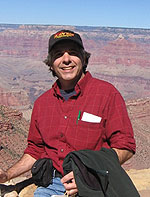 is a travel writer and video editor who lives in Arlington, Massachusetts, with his wife Laurie Ellis.

Read the other stories in Shady Hartshorne’s series, “Arizona Rocks”:

Grand Canyon by Air and Rail 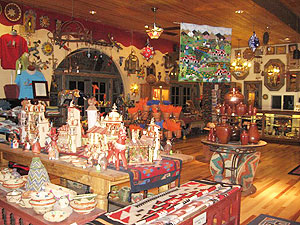 You can buy reproductions of some of the dishware and other items designed by Mary Colter at the gift shop.

Getting Acquainted With Italy’s Piedmont Region

A Netherlands Bike and Boat Adventure

By the Banks of the Suwanee: Natural Northern Florida