I had been to the Philippines before but had yet to visit the Visayas. I was tempted after hearing friends say that they had stayed at one of the world’s best beaches, seen the world’s smallest primate, eaten the world’s sweetest mangoes and dived with thresher sharks.

Being a photographer I planned my visit to coincide with the Ati Atihan festival and I planned to explore the strange geological wonders of the chocolate hills. To keep costs under control I intended using a mix of budget airlines, pump boats and public transportation.

Flying from Manila to Kalibo I took a bus to Caticlan and queued for the short pump boat ride to the Island of Boracay. Walking a narrow gang plank onto the tossing boat, I was happy to get all my belongings on board without falling into the sea!

The small, popular tourist island of Boracay, just north west of Panay Island was my first stop. Arriving at Boracay my first impressions were mixed.

The water and coastline looked great but the mess from rapid development and construction was obvious as I took a tricycle across the island to White Beach where I was staying.

Things improved greatly as I struggled with my suitcase and camera bag along the vehicle-free beach to my hotel. White Beach, with its 4 kilometres (2.5 miles) of soft white sand, is the major attraction here. 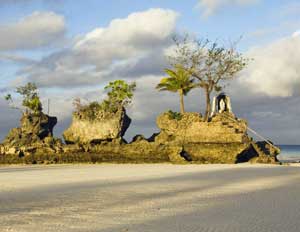 In fact I was tempted not to leave the beach area and simply laze in paradise in the shade of the palm trees before strolling from my beachfront resort to the numerous bars, restaurants, souvenir stalls and shopping malls.

For a change I swam or walked the beach checking out the colorful sail boats with their outriggers. I also enjoyed people watching as the touists rode banana boats, jet skied and parasailed. The sunsets were dramatic.

I joined new friends to watch the sun disappear below the sea as we drank our cocktails at the water’s edge.

At the north end of the beach is Willy’s Rock, with its statue of the Virgin Mary, which draws both devotees and photographers. I was up by 6:30 a.m. to avoid the crowds and to get optimal lighting for my shots. 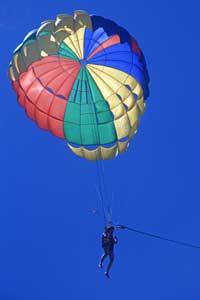 The numerous beach buffets looked great and I’d never seen oysters so cheap. Unfortunately I suffered the penalty and spent six hours the next day on a saline and glucose drip getting re-hydrated.

Hiring a tricycle, I decided to explore the rest of Boracay and aimed for the Mount Luho view deck. What an uncomfortable journey! It was on a dirt track road with my back being jarred every time we went over bumps. I was trying to avoid falling out, preventing my head hitting the roof and clinging onto my camera all at the same time.

The views from the top of the ocean and golf course were great. Descending to Bulabog Beach, I took photos of those participating in windsurfing and kiteboarding on the quieter, windier side of the island. There were serious sportsmen and women there.

Close to Boracay is Kalibo at the northern end of Panay Island. Normally it’s barely worth a visit, but it is home to the Ati Atihan festival, which would hopefully be the highlight of my trip. It’s held in January each year and lasts several days.

The day I arrived was relatively tame and appeared to be generally a case of villagers coming into town, meeting up and parading through the streets in national dress. 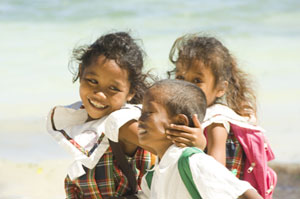 Schoolchildren on Bulabog Beach in Borocay

The festival has religious overtones as the Santo Nino or boy Jesus is celebrated and many carried statues of him. Everyone was in a good mood but photo opportunities were limited. Asking around I found out that the “tribal” highlight would be the next day.

By 10 a.m. the next day I was taking photos where the masses were gathering. Children only a few years old, teens through to pensioners were waiting patiently, drinking water to keep cool in the 90 degree temperature and high humidity.

All had painted their faces black and were dressed according to their particular tribal custom copying the original Ita (Ati backwards) people of the Visayas. Some carried spears; others were in “eagleman,” hawk or ostrich outfits. Still others were in grass skirts or bright orange or purple costumes.

Add to that outrageously dressed transvestites reminiscent of mardi gras and it looked like the day would be fun. 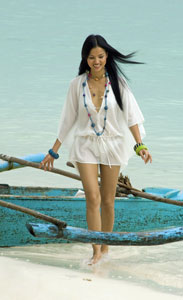 A model takes a break from a
photo shoot at Alona Beach.

In the heat of the morning the “ladyboys” started the parade followed by the “tribesmen.” Bass drums were pounded, horns blew and the hundreds of participants danced down the street.

The large good-humored crowd cheered, waved and took their photos as they mingled freely. Already San Miguel beer was flowing.

“Viva Santo Nino” was shouted out until wearily the participants rested in the square. Hawkers sold food, drinks and souvenir tribal masks to the eager customers.

The following morning the faithful finished their celebration listening to an outdoor Catholic service, honoring Santo Nino. Floats decorated with Santo Nino statues were pulled round the streets before the crowds gradually melted away and it was time for me to move on.

A four-hour bus ride south across Panay passing rice terraces and market towns took me to IloIlo. From there it was a 15 minute hop by pump boat to Guimaras which claims the world’s sweetest mangos. 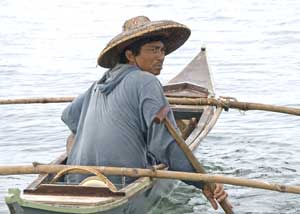 A boatman in Bohol

I spent a day exploring the mangrove plantations, quiet bays and ancient churches, again by tricycle. It was a perfect wind down from the hectic festival. Moreover, there was no evidence of last years severe oil spill.

Bohol – The Chocolate Hills and The World’s Smallest Primate!

My next call was the sleepy island of Bohol. A 20-minute flight from IloIlo took me to Cebu and I went straight to the port for a two-hour Supercat ferry to Bohol. I avoided Tagbilaran, to stay at Alona Beach on the linked Pangalao Island. Alona Beach is a diver’s paradise with several dive operators, clear water and abundant sea life.

I took the opportunity to go dolphin watching, snorkeling and island hopping. Others relaxed with a massage on the beach enjoying the dramatic sunrises and sunsets. 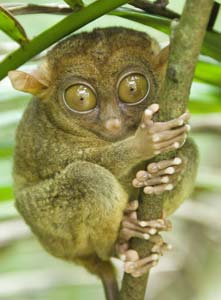 The tarsier, the world’s smallest
primate, can rotate its head 180
degrees like an owl.

Bohol is also home to the tarsier. Often referred to as the world’s smallest monkey it is in fact the smallest primate. Amazingly, the palm sized tarsier, weighing only 3 or 4 ounces and about 4 or 5 inches tall, looks somewhat similar to ET the extra terrestrial!

They are extremely difficult to find in the wild and much of their natural habitation has disappeared through slash and burn agriculture, but you can see them kept in cages in several places along the Loboc River.

I chose to visit The Tarsier Visitors Centre at Corella where they are properly cared for in a huge walk through enclosure with ample trees and bamboo for them to effectively live a natural life. They are really cute, very small but have huge eyes (the eye sockets are larger than their brain or stomach) and ears.

They are nocturnal and seek their food of crickets and cockroaches after dark. During the day, the ones I saw there seemed to do nothing but cling to branches with their long thin “fingers” and hairless tails and pose for the occasional photo. Spookily, their heads rotate 180 degrees rather like an owl. 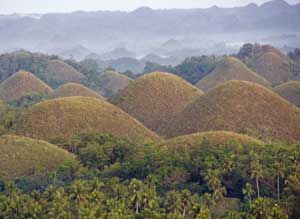 There are more than a thousand ‘Chocolate Hills’ on
Bohol.

Most people only make a day trip to the “Chocolate Hills,” but I decided to spend a night, as they are best at sunrise and sunset. More than a thousand rounded chocolate colored mounds up to 400 feet high cover the centre of the island in this strange and wonderful geological oddity.

Arriving mid-afternoon I rented a motorcycle to explore them, going as far as Sagbayan for alternative views. Climbing the many steps of the main Chocolate Hills Complex View Point, I enjoyed the sunset before meeting the only other guests staying at the humble hotel – the Bohol Harley Davidson group!

The hotel “closed” at 8:30 p.m., so after a long night’s rest I had no problem getting up at 5:00a.m. to climb those steps again for a very peaceful but somewhat disappointing sunrise.

After I’d finished chilling out in Bohol, I took the ferry back to Cebu. I skipped the diving at Monad Shoal despite being told I could be almost guaranteed to see thresher sharks.

Instead I wandered through Cebu City and explored its history, calling at the major monuments of the cathedral, Basilica Minore del Santo Nino, Magellan’s Cross and Fort San Pedro.

But the highlights for me were Carbon and Tabo-an markets. It was interesting to savor their sights, sounds and smells and to stock up on clothes, fruit and dried fish. Plus the kids there made terrific subjects and were really keen to be photographed.

All too soon it was back to Cebu airport and home to Singapore.