Tenerife, The Largest of the Canary Islands

Tenerife, The Largest of the Seven Canary Islands:

“I’ll never leave Tenerife,” says Jose Ramon Gonzalez Duranza. Born and raised in the largest of the seven Canary Islands, Duranza can dissect the geological makeup of every “black” mountain, identify every species of indigenous plant life or tell the dark past of a still-standing convent.

He reads off historical facts like a real-life audio book guide but his is an encyclopedia-knowledge of the islands — particularly of his homeland, Tenerife. For more than 26 years, he has studied his native island and made it his life’s work to guide people around the Spanish Islands.

Much like the rest of the islands of the Canaries (Fuerteventura, Gran Canaria, Lanzarote, La Palma, La Gomera and El Hierro), Duranza’s native island of Tenerife is also the most populated with approximately 43 percent of the Island’s population.

About 900,000 people live on the island whose shape resembles an arrowhead.

First formed by a volcanic eruption more than three million years ago, Tenerife has endured a rocky history. Early inhabitants, the Guanches, settled on the island around 200 BC, but little is known of these early inhabitants’ roots.

Later, historic records capture the Spanish Conquest in 1494 and the colonization of Tenerife by Portugal, Italy and Germany within the next few centuries and the beginnings of their agricultural roots, including sugar cane in the 16th century, the production of wine and other exports.

The British invaded in 1797 and in the ensuing battle, Admiral Horatio Nelson lost his right arm and the invaders were repelled.

Approximately 186 miles from the port of Morocco off the southwest coast of Africa, Tenerife feels and looks more like little Miami upon first glance.

Coincidently, Miami was recently named the island’s sister city by the island’s president Ricardo Melchoir. To link the two cities, there’s now a direct flight from Miami to Tenerife via Continental Airlines and Air Europa.

Tenerife is known as the site of the worst accident in commercial aviation, when in 1977 two Boeing 747s collided on take-off, killing 583 people. The island also served as the filming location for the Louis Leterrier-directed Clash of the Titans — but is still blanketed by its history.

Banana plantations, first introduced by the Portuguese in the 16th century, are sprinkled throughout the island, multi-hued Spanish-Arabic, central-European- and Madeira-style architecture and mountains and beaches coated in black painted rock and sand tarred by the last big volcanic eruption in 1909 all represent the island’s past.

In the northern city of Puerto de la Cruz, hotels outnumber apartments and beaches are covered in volcanic sand. The palm tree-drenched tourist town is a mecca for a good night out, getting an introduction to the island and sampling some traditional Canarian cuisine.

Most meals begin with tapas starters and end with meat — beef, rabbit, goat or pork — or fish paired with papas arrugadas, salty mini potatoes with a red paprika and green coriander mojo sauces.

Designated a World Cultural and Heritage site by UNESCO in 1999, San Cristobel de La Laguna is where the island’s history becomes visually apparent. Walk down the street and stand adjacent to the façade of the Mayor’s House, still a rustic brown, most likely constructed of volcanic rock and Canarian pine.

In La Laguna, 16th and 18th century architecture is still intact. Churches and homes remain untouched, inside and out down each road and showcase some of the terra colors that blanket the island’s structures — herbal yellow, greens and browns.

The only flat town on Tenerife, La Laguna, is approximately 2,000 feet above sea level. Still the island’s religious capital, monasteries and convents pepper the city, but there’s also a strong youthful presence in the city with the Universidad de La Laguna, the oldest university on the Canary Islands and still running since 1792.

Just south of La Laguna, the island capital of Santa Cruz is more cosmopolitan and home to the Cabildo, or office of the President Ricardo Melchoir. More pedestrian-friendly, Santa Cruz is a shopping oasis and one of the major ports of call on the island.

Take a break near La Laguna alum, the late artist César Manriqué’s lake-size pool planted in city center. Manriqué was friend to Andy Warhol and Rita Hayworth, and the Santa Cruz pool is just one of his artistic contributions to the island.

Yellow, bulbous agave cacti blanket the mountain of Masca. Approximately 2,000 feet up, Masca Gorge is not the highest point in Spain or the islands, but the 60-minute ascension feels like it’s truly perched atop the planet.

Halfway up the mountain is a crevice of a village. In the town of Masca, shops, Tenerife tchotchkes, locally-made jams and honey, cup-fulls of silky café con leche and cafeterias (for some small eats) await.

Keep an eye out for one local Italian transplant, who mills his own Canarian soaps and can point to his house, the only one at this elevation, just across the road.

A rocky history, the cavernous Masca Gorge also has some patches of black, volcanic scars from an eruption in 1706, hidden in its twists and turns.

At the base of Masca is the town of Garachico. Also known as Isla Baja (low land), Garachico, was also a victim of volcano. The town has been rebuilt since then.

In the heart of the Isla Baja region, sunbathers crowd the black rock, laying as comfortably as if it were more cushiony, white sand. (Topless sunbathing is typical in Tenerife.)

More history covers the largest municipality on the island. With a population of 40,000, La Orotava (also home to the oldest dragon tree dating back more than 1,000 years) shelters more Canary history from its churches and cathedrals. Cobble stone streets and brightly colored mansions and gardens make Orotava the most vibrant city.

Duranza knows any Tenerife journey is not complete without trekking further south to the highest peak in Spain and all the islands of the Atlantic. Still within the La Orotavo Valley, the peak of Mount Teide is only accessible by cable car but stunning views are still reachable by car.

Hotels like Las Canadas del Teide and Hotel Villa Alba give visitors a chance to stay in the highest point in all of Spain and are also located in country’s highest municipality (1,400 metres) Vilaflor.

At its summit, the snowcapped Teide tops at 12,000 feet. A result of a volcanic eruption more than 500,000 years ago, black rock and gravel coat portions of Teide.

Tenerife is a lot to take in. It’s unlike its mainland country but a huge piece of Spain’s history and future, and is summed up best by one of its most patriotic denizens, Duranza who says: “There’s really no other place like it.”

Casa Rural la Asomada del Gato (City home of the cat), La Laguna
This 18th century country home offers four rooms in the historic town. A Tenerife rusticity, the hotel run by husband and wife provide all the basics: TV, meals and can hold up to 60 people for events.

Hotel San Roque, Garachico
The Carayon family takes good care of this 20-room boutique hotel. Located in the nooks of Garachico, San Roque, which dates back to the end of the 17th century, first opened as a hotel in 1996. Contemporary in design, artists like Mikel Navarro, Carmen Calvo and Susy Gomez dot the interior, including a striking eyeball piece covering the ceiling near the hotel’s lower staircase.

Direct Flights are now available from Miami to Tenerife on Continental Airlines/Air Europa. The island of Tenerife is easily accessible with connections from Barcelona and Madrid and most European airports. 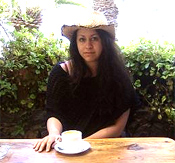 Tina Benitez is a New York-based journalist who is continuously searching the next trek. She has just completed her first book on Savenac, a historical site in Montana and regularly covers rock music and wine for various publications. Check out her site Rock n’ Wine.