Guadeloupe is begging to be explored. Hike to La Grande Soufrière volcano, picnic in a tropical forest, visit a Hindu temple, and walk the ramparts of Napoleon’s fort. Discover whether you prefer a white or black sand beach.

While you’re at it, sip Ti’punch, taste cassava biscuits, and smell salt air mixed with lily blossoms. It’s all waiting for you on a bunch of little islands in the French West Indies–The Guadeloupe Islands.

The flight leaves early enough to enjoy your first full day in Guadeloupe, arriving around noon, just in time for lunch! The day I arrived, there was a firehose greeting from the tarmac. Baggage handlers documented the event like paparazzi with iPhones.

Enjoy your hotel but get “off campus” too.

It was about a 20-minute drive to our hotel, the La Créole Beach Hotel, and Spa. The hotel was built in the early nineties but looked quite up-to-date with decorative choices to bring a modern flair to what might otherwise be a cement block building. The mature and exotic trees throughout the property wowed me. 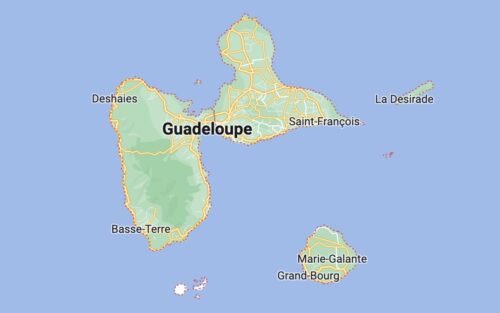 The public spaces–lobby, lounge, and dining areas are open to the pool and the beach with an indoor/outdoor feel that speaks to why you booked a trip to Guadeloupe–to luxuriate in the outdoors.

And while that is reason enough to go to Guadeloupe (or any Caribbean island), leave the property, and explore the island, its culture, and people. That is how you really get to know a place.

Guadeloupe Islands, with an “S”

Guadeloupe is an archipelago of five main islands: Grand-Terre, Basse-Terre, Le Désirade, Les Saintes, Marie Galante, and many other small islands and inlets.

Depending on your time allowance, I recommend separating your vacation into two or even three hotel locations on the various islands.

Starting with your home base on Grand Terre, the eastern side of the Guadeloupean Islands here is a short list of things to do.

Pointe Des Chateaux is a peninsula situated on the very tip of Grande Terre overlooking the Atlantic. It’s an easy hike from the parking lot to the highest rocky lookout. And it’s a hike you’ll never forget. There are thousands of butterflies kissing you along the way, floating in, out, and through the honey-nectarine-smelling bushes. They’re guiding you to the end goal, which is to reach a crucifix at the peak.

This snaggletooth coastline, with its jutting rocks and craggy coves, is singular and, therefore, Instagramable! Don’t miss it!

You can tell a lot about the history of a place and its culture by how people are buried. Situated on a hillside at the entrance of the town, the Morne-À-L’eau Cemetery is made of graves and mausoleums covered in black and white tiles.

Walking through, it feels like you’ve entered a spiritual Alice in Wonderland. C’est très unique! Notice that many mausoleums are designed in cracked tile, again in black and white. The burial placard is to the side or not there at all.

It’s easy to see the professions of some of the dead. This one was a seamstress, spools of thread, needles, and thimbles decorating the grave. That one was probably an accountant or numbers person. An adding machine is on this grave.

Hit Pointe-à-Pitre the first Saturday you’re on the Island. This will give you a sense of the Guadeloupean culture, traditions, and liveliness.

Take an electric tuk-tuk tour. The large golf cart is a great way to maneuver in and out of the streets of Pointe-à-Pitre. There are several to choose from, both on Tripadvisor and Viator.

My tuk-tuk tour was a graffiti tour. Our guide admitted, “Pointe-à-Pitre is a rather ugly city,” but artists are reclaiming the spaces throughout the city to bring a sense of beauty and heritage to what, in many cases, was abandoned.

To call the artwork I saw graffiti is really a misnomer. Yes, it was paintings on the sides of buildings, but these were colorful, imaginative, contemplative pieces done on a grand scale. Just wow.

Founded in the middle of the 18th century and having weathered multiple hurricanes and fires, Pointe à Pitre’s architecture is a mosaic of its history, a mixture of colonial-New Orleans-style buildings next to an occasional creole home and somewhat battered cement block apartment or office buildings.

Pointe-à-Pitre hosts The Memorial ACTe, a 77,000-square-foot museum dedicated to the memory of slavery and the slave trade. Designed by the Guadeloupe architecture group Berthelot/Mocka-Célestine, it is one of the most elaborate, comprehensive, and artistic structures in the Caribbean, indeed the world.

You see this building from viewpoints throughout Pointe-à-Pitre and its harbor. You can’t miss it. Unfortunately, the day I visited, it was closed. So, dear reader, leave a comment to tell me what it was like when you go.

Food and libation on Grand-Terre

I lunched at Kassaverie GREGO; you can find them on Facebook. If ever you wanted to eat delicious local vegan food in a treehouse in a tropical forest, this is your place.

Owner Widy Grego built his business with the help of his mother by selling cassava biscuits from the side of the road.

There is no menu. A wooden palate is presented to you with various tasty bites; all made without flour. In its place, cassava! My travel companions especially liked the sweet potato lasagna and the almond butter (me too!)

Here you can enjoy cocktails cliffside overlooking the Caribbean or the infinity pool. The accommodations go from bungalows to panoramic suites.

Oh, and there is a great big spa with all the fixings. So you can easily move from your beach chaise to a massage table. Note: LaToubana is the only five-star hotel in the Guadeloupe Islands.

The left wing of butterfly-shaped Guadeloupe is called Basse Terre. A large portion of Bass Terre is a national park.

The park, a tropical rainforest, has tons of hiking trails, several of which reach the La Grande Soufrière (big sulfur) volcano. I was lucky enough to see the top most jagged edge of big sulfur one day when the clouds had cleared, not a regular occurrence.

Les Saintes for a day or maybe two

Trois-Rivières is where the ferry leaves and returns from the tiny archipelago islands of Les Saintes.

Visiting Les Saintes should be part of any Guadelopiean vacation. Stay a night or two to see what these tiny islands feel like without the influx of ferry day guests.

The islands are best discovered by a scooter or golf cart; both are available for day rentals. Once you’ve got wheels zipping around the island is great fun and an excellent way to discover hidden beach coves and grand views.

Fort Napoléon is a typical tourist stop. From here, there are fantastic views of the Les Saintes, which include Terre-de Haut and Terre-de-Bas, as well as several other uninhabited islands.

The museum inside the fort does a nice job of presenting both the history of the fort and the heritage of the Islands.

You can view large-scale model British and French military ships of The Battle of the Saintes, which took place in 1782, each ship carrying over 100 cannons (That many? Who knew?).

There is also some representation of the native population known as L’amerindien. The museum is kid-friendly, and it is a fun way to capture the history of what the French West Indies were and what they became.

In November, it was quiet, easy, and breezy, but I’m told during high season Terre-de-Haut, the village can become quite busy. The main street is chock full of restaurants, bars, and boutiques, perfect for popping into or hanging out.

We had lunch at Ti Kaz La, where the water was literally lapping against the building. This is a rather gourmand establishment for the island, and you’re meant to linger over one, two, or three Ti’punches, Guadeloupe’s signature cocktail.

The Beaches of Les Saintes

As for beaches, we went to Pain de Sucre, an intimate cove that you access by walking down a rocky, sometimes slippery, path.

Here you can get your Blue Lagoon or From Here to Eternity fantasy rolling. It’s not private, but who cares! Other beaches recommended on Terre-de-Haut are Pompierre and Anse Rodrigue.

The Saintes offers every sort of water sport you can think of; diving, kayaking, kite-surfing, and sailing. But if you’re a landlubber, just get out there and walk. It’s beautiful!

An intimate place to rest your head and spark your appetite is Le Jardin Malanga. This little hotel gem sits among coffee, cocoa, cinnamon, and breadfruit trees, to name a few. It’s a colonial mansion that dates back to the mid-1920s. Built on the hillside of La Grande Soufrière (the volcano!), Le Jardin Malanga has breathtaking views of Les Saintes. Enough said!

2023 will be a big year for Guadeloupe thanks to a Hollywood movie celebrating the life of composer Chevalier de Saint-Georges otherwise known as Joseph Bologne. 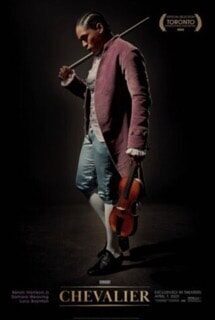 Joseph was born in Guadeloupe in 1745 to a wealthy plantation owner and an enslaved Senegalese African woman. At age seven, he was recognized as a musical genius and educated in France. Mozart was an acquaintance, along with several other illustrious and historical composers. I won’t tell you more… see the movie! It’s called Chevalier.

Joseph’s story overlaps with the story of The Distillery Bologne in the city of Baillif. Joseph’s father founded a sugar factory in the 17th century that, centuries later, became the Bologne Distillery.

Today you can tour The Distillery Bologne, learn about its history, and taste its rum. Seeing the cane fields, bottling plant, and rum barrels give you an idea of the rum-making process and its significance to the islands. Belly up to the tasting bar located in the souvenir-rum store. The sales/bartenders are ready to educate you as long as you’re ready to drink!

At the end of the day…

Every Guadelpoupian has their favorite beach, and they all seem to be different. Naturally, there are so many to choose from! For me, it was Grande Anse beach.

It’s known for its unforgettable sunsets, and they are just that. But also, the vibe at Grande Anse is so laissez-faire. Small shops and cafes line the parking lot. Families and couples, young and old, dot the beach, and squealing kids run back and forth with the tide. It’s a typical beach scene.

There are many people of Indian descent, Tamils from southern India to be more specific, who are settled in Guadeloupe. They trace their lineage to 1861 when 40,000 indentured servants were imported to Guadeloupe to labor on plantations. Today, there are Temples in Basse-Terre and several Indian restaurants on the islands worth checking out.

Cathie Arquilla is proud to be a veteran GoNOMAD writer.  Both travel writer and fashion stylist, not only can Cathie tell us why to go, but what to wear!  Happiest while experiencing a local scene, its grit or glamour, Cathie’s writing brings readers to a place and encourages them to go there too. She lives just outside of New York City.  To find out more about this renaissance gal with dual careers visit her website.