The Historic Hills of Valparaiso Chile

The Murals and people of Valparaiso, Chile

For decades, scores of public figures who shaped South American history and culture have passed through or made their home in the Chilean port city of Valparaíso; people like revolutionary-turned-pop-culture icon Ernesto ‘Che’ Guevara, Chilean Nobel Prize-winning poet Pablo Neruda, and even military dictator Augusto Pinochet.

However, none of these prominent people match the personality of Valparaíso itself.

Visitors will stumble upon the identity of this gritty yet richly historic port city most easily when traveling at ground level. Touring Valparaíso on foot is the best way to encounter everything from the grand historic buildings down to the lowliest hot dog stand surrounded by locals enjoying ‘completos,’ – hot dogs smothered in a thick layer of mashed avocado.

Valparaíso’s history and continued vibrancy are owed in large part to its importance as a port city. Valparaiso began its days as a vital port as an important stop on the journey from the Atlantic Ocean to the Pacific Ocean.

Today Valpo, as it is affectionately known to locals, maintains its importance as a port as the headquarters of the Chilean navy; this makes it a city that has always been centered around its ports. This makes the steep walk down to see this area a must for visitors to Valparaíso.

In the tightly packed docking space of the harbor, small fishing boats huddle in masses in the shadows of imposing naval ships, enormous luxury cruise liners and cargo ships loaded down with mountains of multi-colored railway containers.

Steps inland from the harbor is the palatial headquarters of the Chilean navy facing Plaza Sotomayor. Here you can find the Monumento a los Héroes de Iquique, a monument that is constantly guarded by a naval officer and honors the heroes that fought in the pivotal battle of Iquique during the 19th century War of the Pacific between Bolivia, Peru, and Chile.

The remains of national hero Arturo Prat are buried beneath the monument and an eternal flame burns at the sight for this hero whose portrait resides on the $10,000 peso note.

Of course, the real charm of Valpo isn’t found in its monuments and buildings but in the journey between sites, in the stop at an outlook point to see the patchwork of tin and houses that cling to the steep hills.

You’ll find it in the rest stop on a bench in a plaza bustling with children, businessmen, and pigeons, or walking down a street lined with colonial architecture that takes you back in time. It is in the intangibles that something truly special is found in this seaport city.

One such unique experience in Valparaíso is using the historical and handy funicular lifts. These nearly vertical elevator-like cable cars have been ferrying people from the lowland plains of the downtown port area up into the hills of Valparaíso for well over 100 years.

The first lift, Ascensor Concepción, was built in 1883 for residents of the neighborhood Cerro Concepción, and it still carries people up the steep hill to the historic district, which boasts many delightful places for visitors to stay and to eat.

Conception Hill, as it is known in English, is one of the many hill districts that make up Valparaíso and is one of the eight that are considered part of the historic quarter, which was designated as a UNESCO World Heritage Site in 2003.

Walking the rugged cobblestone streets of Cerro Concepción gives a feeling of the city in quieter times. Some of the old streets have become rundown and are overgrown with flowers and weeds.

Lining many of the winding streets are bright murals that lend a more modern feel to the old district and are a reminder of the artistic character of the city.

These murals, along neglected side streets and dilapidated roads, epitomize the city’s character and would be so easily missed when taking a vehicle from site to site.

A city of art

The murals seen throughout the city are perhaps an homage to the Museo a Cielo Abierto, the open sky museum. This museum is far from traditional. Scattered among the streets and staircases of Cerro Bellavista are 20 beautiful murals found on the sides of buildings and on concrete walls.

The first large murals were painted by art students from the Art Institute of the Catholic University of Valparaiso in 1969 then the burgeoning museum was added to by famous artists like Roberto Matta and Matilde Perez.

The collection of murals have since been made into an official site by large signs on both sides of the ‘museum’ that welcome you in and explanatory signposts throughout the museum.

However, some of the murals could use some refurbishing or are even overgrown, but in some ways, this just adds to the rustic urban character of the site.

It is quite possible to make your way to all the murals by simply following the side streets and staircases that lead you through the maze of Bellavista, but a map is recommended to make sure you don’t get lost or miss a mural.

Even though this is one of the defining sites of the city it is quite possible to be completely alone for much of your walk as you wander between the public masterpieces staring up, and sometimes down, in awe.

The home of Chile’s eccentric poet

Another testament to the active arts culture of Valparaíso is the fact that, throughout its history, many famous artists have taken up residence in the hills of the port city. None of these artists are more prominent, especially in Chile than Pablo Neruda.

Neruda is beloved throughout Chile and the world as a fun-loving poet and socialite that defined the times during his life, spanning from 1904 to 1973. He also brought pride to Chileans by winning the Nobel Prize for literature in 1971.

One of his many fascinating homes can be found near the top of Cerro Bellavista and is open to visitors who are interested in getting a very personal glimpse into the eccentric mind of the charismatic poet.

The home, named La Sebastiana (after the architect who designed it) was made to mimic Valparaíso on a small scale. The walls, both inside and out, are painted in bright pastels and the hallways and staircases are narrow with small nooks and crannies hidden throughout the house to be discovered after further exploration.

It also houses hundreds of interesting pieces from Neruda’s thousands of collections. Something else that can’t be missed at the house is the spectacular view down to the harbor from the house’s large windows and yard.

To get even further insight into the life of Neruda, take the hour and a half bus trip to the town of Isla Negra. Here you will find Neruda’s favorite home: a series of strangely connected buildings right on the seaside.

Certainly walking the streets of Valparaíso is not without its drawbacks. Although taking the funiculars can save you from some steep staircases, they can’t save you from them all.

With Valparaíso being built on very steep and hilly terrain, walking around can involve a lot of climbing. One way to avoid this is to take a taxi or a bus to the attraction that is furthest up the hill for your tour that day and simply make your way down from there.

Safety can be a more serious concern and although most of the tourist districts are considered safe during the day there are occasional reports of muggings and pick-pocketing. These can mostly be avoided with the usual precautions like traveling in groups, leaving valuables hidden, or locked up where you are staying, and keeping very aware at all times especially in crowded places.

Like any large city there are some safety issues, but with some slight precautions walking Valparaíso can be a highlight on a trip to Chile.

While you will no longer have the chance to meet Neruda or ‘Che’ Guevara on the streets of Valparaíso, trudging the same cobblestone roads as these South American icons can get you closer to what they may have experienced in years past.

From Santiago, Tur-Bus and Pullman are two recommended companies that have buses leaving from every 15 minutes from Alameda or Pajaritos bus terminals to Valparaíso. The ride takes about an hour and a half. 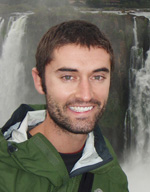 Brendan Nogue is a photographer and writer based in Calgary, Canada, who is always looking forward to his next vacation.