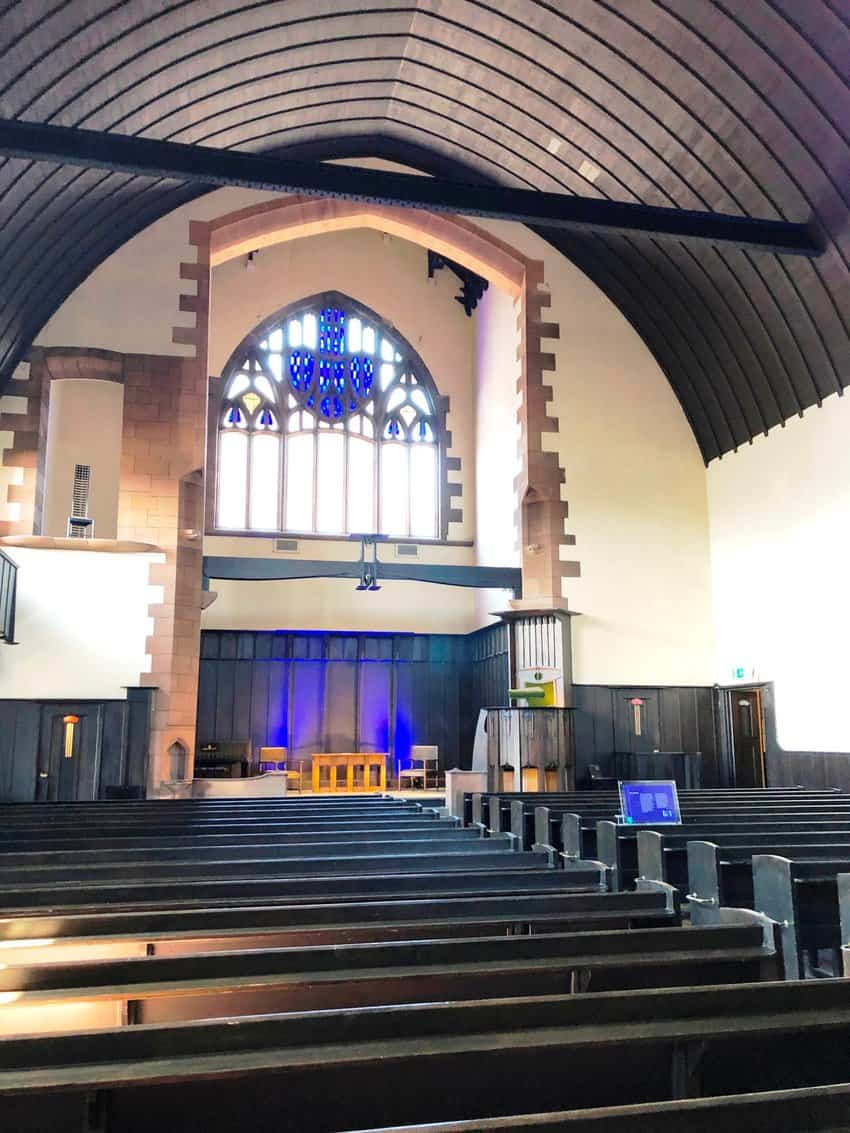 On the Trail of Charles Rennie Mackintosh, Glasgow’s Favorite Son

Before visiting Glasgow, Scotland, all I knew about Charles Rennie Mackintosh was that he was a late nineteenth-century Scottish designer somehow connected to the Art Noveau movement.

My understanding of and appreciation for Mackintosh was expanded, (or ‘sorted’ as the Scots say), during my time in Glasgow visiting Mackintosh haunts with Peter Trowles, arts and heritage consultant and cultural tour guide.

Mackintosh was born in Glasgow June 1868. As a young man, he became an architectural apprentice while studying at night–-and winning numerous prizes along the way–at the famed Glasgow Art School.

At the School, he and another young student, Herbert MacNair, met sister students Margaret and Frances Macdonald. Charles and Margaret married as did Herbert and Frances. (Ahead of her time Margaret kept her maiden name.)

As both pairs had similar artistic styles, they worked collaboratively in a group known as The Glasgow Four.

My first stop with Peter was the famed Willow Tea Rooms at 217 Sauchiehall Street.  Designed by Mackintosh, the tea rooms (plural as there are several under one roof) opened in 1903 and were restored between 2014 and 2018 following Macintosh’s design as closely as possible. 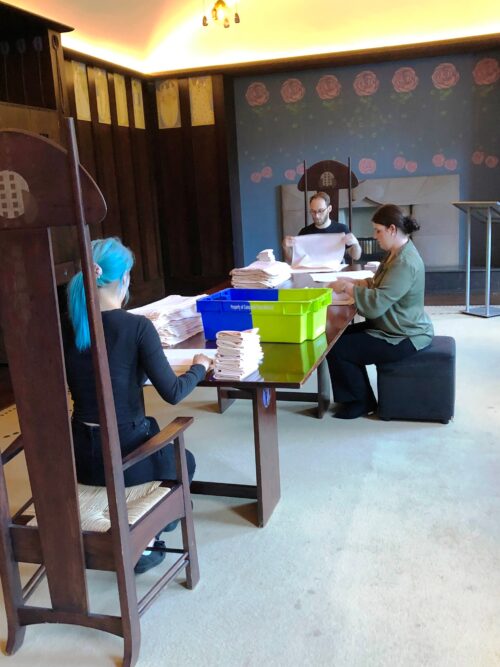 We had lunch there selecting from a menu offering ‘Traditional Scottish Fayre’ including Scotch Rarebit, (basically melted cheese with Worcestershire sauce on toast); sandwiches like a BLT or baked ham, and ‘mature’ cheddar and various salads.

A true afternoon tea there can be as simple as tea with a scone or the entire shebang: tea or coffee presented with a three-tiered cake stand offering a selection of sandwiches, scones with clotted cream, jam, and butter, and a choice of the day’s cake.

According to Peter, “The Willow Tea Rooms were owned by Glasgow businesswoman Miss Catherine Cranston and were her fourth suite of tea rooms in the city.

Mackintosh designed a set of interiors most with unique furniture and fittings: two separate salons on the ground floor, a mezzanine gallery, and the upstairs ‘Room de Luxe’, the most elegant space reserved entirely for women customers where a cup of tea cost an extra half-penny.”

Catherine, aka Kate, was referred to as Miss Cranston even after her marriage. Short, squat yet fashionable, Miss Cranston came from a family deeply involved with the temperance movement.

This upbringing combined with her realization of the growing need for a place where people could meet, chat and have a bite to eat influenced her decision to open tea rooms.

Besides the’ Room de Luxe, upstairs also has a billiards and smoking room for gentlemen.

Somewhat like Frank Lloyd Wright, when designing a space Mackintosh tried to do it all.  At the tearooms, he was responsible for furniture, light fixtures, wall decorations, and even the knives and forks

Adjacent to the Tea Room is an exhibit about Mackintosh and Miss Cranston and a gift shop.

Afterward, we dropped by the Glasgow School of Art, originally designed by Mackintosh and now covered in scaffolding after the second of two major fires.

Our next stop was Queens Cross Church, 870 Garscube Rd, often called the Mackintosh Church. This is the only church the artist designed and serves as headquarters for the Charles Rennie Mackintosh Society, a non-profit that promotes his work as an architect, designer, and artist.

The church has a vibrant blue stained glass ‘heart’ window and is simplicity at its best. The pulpit is carved in low relief based on birds and floral motifs. Pews have curved brass umbrella holders on their ends for the inevitable Scottish rain.

Our following stop was The House for an Art Lover set in lovely Bellahouston Park. In 1900, Mackintosh entered a competition set by a German design magazine to which only ‘artists of modern tastes’ were invited to enter. The project was to create a large country house for an art connoisseur.

Due to a technicality in not meeting an entry date, Mackintosh did not win so his concept remained just that—ideas on paper. Happily, in 1989 a Consulting Engineer who had restored nearby Mackintosh interiors decided to build the building.

Construction required massive detective work because Mackintosh’s drawings were sketchy so builders and artists had to work from vague plans and fill in many details including the selection of materials.

Today the building is surrounded by lovely gardens and has a café and the inevitable gift shop. The House is rented for meetings, corporate events and many weddings.

The following morning Peter shepherded me onto the Glasgow subway, known as the Clockwork Orange as it is painted orange and travels in a small loop.

We alighted at Hillhead Station in the city’s West End which is home to The University of Glasgow dating from 1451 and the fourth-oldest university in the UK.

It was founded by a charter from Pope Nicholas V at the suggestion of Scotland’s King James II. As it was July, students were largely absent but we walked around looking into several of the beautiful Gothic quadrangles and other spaces.

The Hunterian Museum and Art Gallery is set within the Glasgow University campus.  I thought the museum a mishmash of holdings– everything from animal skeletons to pottery and Roman artifacts; however, the Mackintosh section is worth the visit.  The Glasgow house Mackintosh and his wife shared was demolished and later reassembled inside the University’s art gallery.

Because the gallery is on a hill the house’s original front door sits high off the ground—an oddly funny touch considering that Mackintosh was such a perfectionist.

The white bedroom with white carpeting must have been a trial in sooty nineteenth-century Glasgow  This bedroom displays a stunning Mackintosh cheval glass (tall mirror) and in the white drawing room are shelves holding some of the books covers Mackintosh designed.

The gallery also includes a bedroom designed in 1916 for an English-based client with blue-and-black striped bed linens contrasting strongly with the golden oak of the beds themselves.

We made a brief, non-Mackintosh stop to check out the angular exterior of the Riverside Museum, 100 Pointhouse Road, designed by architect Zaha Hadid.

The museum is devoted to transport with everything from locomotives to d even skateboards and has lots of interactive displays. A kid would adore it as would transport-mavens. The ‘Glenlee’, a three-masted bark berthed in the river, is reflected in the museum’s glass front.

Our last Mackintosh stop was the Kelvingrove Art Gallery and Museum on Argyle Street. The building, built in the Spanish Baroque style, is magnificent. 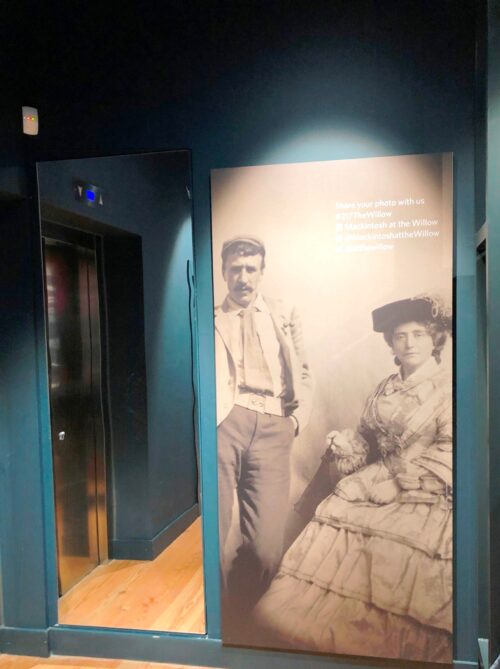 It opened in 1901 as the Palace of Fine Arts for the Glasgow International Exhibition (sort of a World’s Fair) and reopened in 2006 after a huge renovation.

Mackintosh never got the Glasgow recognition he felt he deserved. In 1914 he and Margaret moved to Walberswick on the Suffolk coastline before finally settling in London. This was bad timing as the eruption of WWI ended most building projects and thus the need for architects.

Finally, Mackintosh moved to the South of France where he painted watercolors, something of a comedown for a brilliant and eclectic, if obstinate, talent.

If You Go to Glasgow:

Peter Trowles:  Note: Peter is flexible as to hours to spend with him. He offers behind-the-scenes visits to many places. Contact him directly. website

Willow Tea Rooms:  Note: This is the original of the several tea rooms.  website