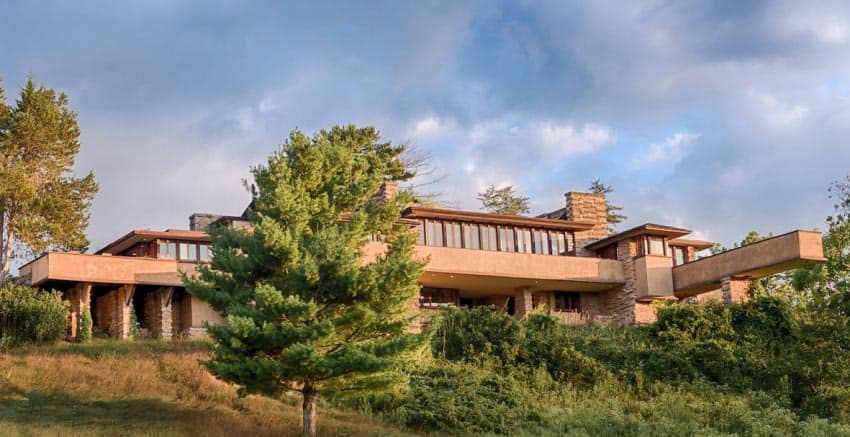 Getting to the heart of the genius behind the Guggenheim Museum, Fallingwater, the Prairie Houses, and more

Taliesin is a true destination. If you travel to this masterpiece of celebrated architect Frank Lloyd Wright, it’s because you want to go there.

It’s not on the way to anything or even very close to a major city. Located among the farms and fields of the prosperous little town of Spring Green, Wisconsin (pop. 1,652), it’s about a three or four-hour drive from Chicago, two hours from Milwaukee, a 45-minute drive from Madison, the state capital and home to the University of Wisconsin-Madison.

But if you have an interest in architecture, when you get to Taliesin, you may not ever want to leave.

The centerpiece of the 800-acre Taliesin estate is the house of the same name, Wright’s primary residence from 1911 to his death in 1959, but that’s not all there is to see by any means.

Equally interesting are the buildings housing the school of architecture Wright founded in 1932, still in operation; Tan-y-Deri, the cottage his sister lived in; the immense picturesque Midway Barn and other outbuildings; and the Romeo and Juliet windmill.

These landmarks are all on the four-hour tour offered by Taliesin Preservation, one of several tours available. Note: you need to be able to walk the paths from one cluster of buildings to the next and negotiate stairs to participate.

The length of the tour feels just right, neither too long nor too short. It takes time, and the tour gives you the time, to absorb and appreciate the many treasures on view as well as the wonderful views of the pond, the fields, and the hills that “softly enfold you,” in Wright’s words.

About midway through, they roll out the coffee, cookies, and other snacks to fuel you up for the grand finale, the house on the highest hill’s “shining brow,” which is what Taliesin means in Welsh. (Wright’s mother’s family emigrated from Wales to nearby Richland Center in the 1860s.)

It’s fun to sip lemonade on the terrace, with its views of the grounds, an arbor, plantings, and the rectangular pool where Wright sometimes cooled off on hot summer days, just outside Wright’s bedroom.

Of the dozen or so people who gathered at the Visitors’ Center at 10 a.m. on an overcast, chilly spring Saturday for the tour, most were clearly pilgrims.

The couple who were working their way down the list of Wright landmarks. A friendly couple with two exceptionally attentive and well-behaved tween boys. The woman who felt obliged to correct the guide right off the bat about a minor point.

Margaret, the delightful docent, was more than equal to the task of handling hair-splitting comments with good grace in the course of shepherding everyone along.

As might be expected of a retired actor, she had a beautiful voice and knew just when to strike a dramatic note—Wright’s life had more than its share of drama—and when to change up the mood with humor.

She was an informed and adept storyteller, weaving together details of Wright’s personal story and career with information about his groundbreaking contributions to architecture.

The first stop was Hillside, the school that Wright designed for his teacher aunts. (Wright grew up in nearby Richland Center, where his mother’s Welsh family had settled).

The set of low-slung buildings approached via a sweeping gravel drive is a fitting first stop, “Frank Lloyd Wright 101,” in effect.

Built in 1902, it has the expanses of glass, projecting rooflines, emphatic angles, and integration with the surrounding landscape that are defining elements of the architect’s style.

The exterior walls, made of local limestone, are faceted and textured, the individual stones stacked in an uneven pattern at the corners for added visual interest.

Even the paving stones are worth studying for the fossil-like patterns.

Bring the Outside In

One of Wright’s innovations was to bring the outside in, with stonework and exposed wood beams, and break down the barrier between the outside and the inside.

We take for granted now certain features of a contemporary house—big windows that let light in and let residents see out, for instance—that were unheard of when Wright began designing domiciles.

Still in place at Hillside and at the house of Taliesin are original lighting fixtures and built-in window seats, cabinets, and bookcases, also hallmarks of Wright’s style.

His idea was to design not just the building, but the tables, chairs, and other interior furnishings.

Hillside houses an enormous workroom filled with rows of old-school drafting tables, a dining hall, an assembly hall, dorm rooms for first-year students, and an offbeat gem of a theater. Its atypical shape gives it a striking appearance—and according to Margaret, it’s a great place to see a performance.

Wright designed the distinctive seating (which may be best for audiences watching a one-act play) and appointed it with a bodhisattva statue and other Asian artworks he collected.

Holding center stage is a beautiful Wright-designed stage curtain, handmade of felt squares. Representing the hills, river, and fields of the Spring Green valley in a formalized fashion, the curtain evokes the elegant geometrical stained glass windows that Wright designed in the first half or so of his career.

From there it’s up the hill to the Romeo and Juliet Tower. When Wright drew the plan for the original 60-foot windmill in 1896, his uncles scoffed at its untraditional design, predicting it would keel over in the first gale, but his aforementioned aunts, who had asked their nephew for the plan, prevailed and got it built.

And the tower prevailed until 1992, when it was taken down as too deteriorated to restore, and the replica that now stands at the crest of the hill was erected.

More enduring than its namesake couple’s relationship, the tower has a semicircular balcony—on the “Juliet side”—that could be straight out of a Shakespearean stage set. On the other side, “Romeo takes the force of the blast,” as Wright put it.

The house Wright built for his sister, Jane Porter, and her husband is just around the corner from the windmill, with a couple of other small houses, including one converted from a chicken coop, nearby. Tan-y-deri sits snugly against the slope of the hill.

Its layout seems to draw you straight from the quiet front entrance through the house to the screened porch and the open balcony beyond it, a place to take a deep breath and relax, as you survey a vista of the Wisconsin River and higher hills on the far horizon.

Taliesin the House: So Wright

And then it’s on to The House. It’s extraordinary how much it feels like a home, nearly 60 years after his death. (Wright’s third wife, Olgivanna, lived there until 1985; the many restoration projects taking place at Taliesin include removing “improvements” she made after his death and uncovering more of Wright’s distinctive details. Taliesin Restoration deserves kudos for providing such close access via its tours. )

There are chairs in companionable groupings, musical instruments and seashells artfully arranged on windowsills, an abundance of the Asian art and artifacts Wright collected on shelves, walls, and tables, a grand piano in the main living room, an industrial-style lamp next to a corps of colored pencils standing at attention in a circular holder on Wright’s desk, and drafting tables where he dreamed up Fallingwater and the Guggenheim.

Many of the furnishings are built-in—characteristic of Wright’s residential projects. Others were handcrafted from his designs: chairs, desks, and a circular music stand designed to accommodate four players. Banquettes and window seats with velvet cushions provided a perch from which to admire the bucolic views or read a book by the fire on a chilly day.

It’s not just the furnishings that suggest the architect’s presence. Wright’s mastery is everywhere apparent.

From one room to the next, you go with the flow, through intimate spaces into high-ceilinged, dramatic ones. Recessed lighting helps to set the mood, as does the earth-tone palette of the plastered walls.

The house is both grand and on a human scale. Complex and serene. That serenity was hard-won. The first house Wright built on the site in 1911 was nearly destroyed three years later when a servant went berserk and not only set fire to it but also murdered seven people there at the time.

Among them was Martha “Mamah” Borthwick, with whom Wright was deeply in love, and her young children, another child, son of one of Wright’s trusted carpenters and other close associates of his. Another fire in 1925 destroyed the living quarters. Wright rebuilt again.

His was a restless genius; Wright was always thinking about how something could be improved, at times to a maddening degree in the eyes of his clients, co-workers, workers, friends, and family. When you visit the iteration of Taliesin that stands today (sometimes referred to as Taliesin III), you can’t help feeling glad that his nature drove him to persist against the pain of loss and serious setbacks, to arrive at such a full-fledged work of art.

Taliesin Details: You might want to plan your visit around a meal at the Terrace View Café, in the Visitor Center. The menu features local produce, the dining room is all Wright, and the view of the Wisconsin River adds to the ambiance. The Visitor Center also has a great store.