Montana’s Badlands in the Southeast

The roads less traveled through Southeast Montana are filled with delicious flavors and stunning sights that have gone mostly undiscovered.

It’s an area known well to the local population, but now that the word is out about what all this corner of The Big Sky state offers, the backroads are seeing a bit more traffic.

“The Southeast has always been a hidden gem for Montana,” says Nicole Gonzalez, media manager for the Montana Office of Tourism. “And it’s garnering more attention, which is amazing for the local communities.”

There’s Beauty in the Badlands

Jurassic Park has nothing on what lies beneath the earth in Montana’s Badlands. Dinosaur bones and near-complete skeletons have been found buried all around Southeastern Montana.

They’re found along under the soil and along cliffsides of sandstone worn away by millions of years of rains, snow, and ice.

It’s a paleontologist’s dream thanks to water washing in from the Rocky Mountains 65 million years ago, bringing rivers that cut through the Badlands over the millennia causing a great deal of erosion. To make a long story short, that rushing of water, says Makoshika State Park paleo intern Anthony Gordon, left fossils in its wake.

Makoshika, the state’s largest state park, is one of 14 places along the Montana Dinosaur Trail where dinosaur enthusiasts can visit the museum in the park’s visitor center and see the head of a Triceratops, found just outside the park boundary, as well as other dinosaur bones and fossils unearthed around the 11,000-plus acre park in Glenville.

“Dinosaur tours are big thing around here and bring in a large revenue for Eastern Montana,” says park manager Riley Bell. “It brings families out this way and is a great thing for children. We have a lot of hidden treasures out here.”

The park has miles of trails for hiking, overnight camping facilities with RV hook-ups and areas for rustic camping.

For more information on the Dinosaur Trail, visit mtdinotrail.org.

Beefing Up on The Burger Trail

The Burger Trail Southeast Montana is a new experience developed by the state’s tourism department to spotlight restaurants in some of the state’s smaller towns and communities — places that before were local hangouts have become a big draw for burger lovers.

Montana, is, after all, known for its grass-fed cattle, an industry that brings in nearly $2 million in cash receipts annually.

The burgers you’ll find along the 600 miles of trail go well beyond mustard, pickles, and cheese.

In Billings, head straight to the Burger Dive. This place is the end-all for burger lovers and has won numerous awards, among them a win in the World Food Championships for its I’m Your Huckleberry Burger with huckleberry-Hatch chili barbecue sauce and goat cheese.

It won “Best of the Bash” at Food Network’s South Beach Wine and Food Festival Burger Bash and has been featured on Man vs. Food.

The creativity put into each burger is a thing of wonder. On busy days, parking is in demand, but it’s worth the trouble to find a space. Check it out at theburgerdive.com.

Forsythe is a tiny hamlet with huge flavors and servings you’ll find at The Joseph, a town tradition.

“The Burger Trail has been pretty popular,” Alecia says. “People love road-tripping — you have to really road trip when you’re in Southeast Montana.” Online: The Joseph on Facebook.

On to Miles City where a visit to the Waterworks Museum and its impressive collection of artwork from regional artists is capped with a burger at Tubb’s Pub. The pub is tucked between two popular bars, making it a busy block on any night, or afternoon, for that matter.

If you’re ready for a challenge and a cold brew, this is where to find it. Your choice of burgers isn’t vast, but it’s enough to satisfy. The Stuffed Burger takes two 1/4-pound patties and wraps them around your choice of cheese and stuffers, like onions, mushrooms and banana peppers. Pat yourself on the back if you can finish this one. Online: themontanabar.com 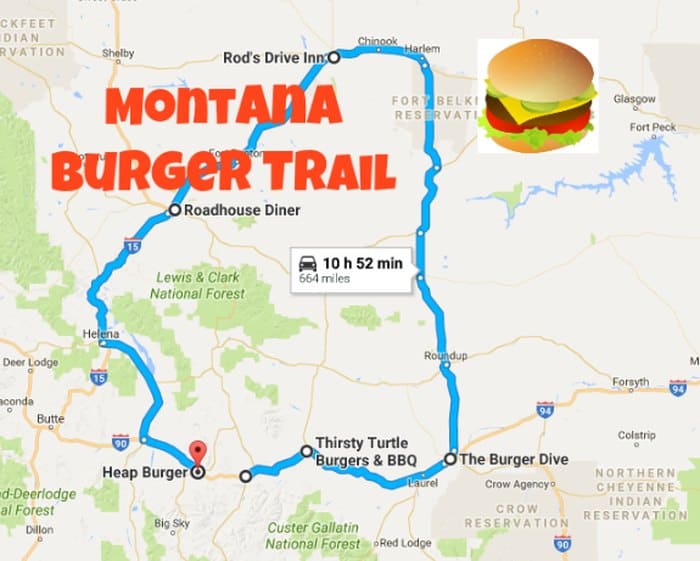 The Burger Trail continues in Terry, a small community that has one of the most-popular burgers along the trail, as well as hands-down, the best fries to go with it. The burger at Roy Rogers Bar, Grill and Casino is best described as West meets South with its Montana beef burger topped with fried green tomato and bacon. The restaurant’s cowboy décor makes this a favorite hang-out for the local crowd. Online: Roy Rogers Bar Grill and Casino on Facebook.

After a full day of exploring the trails of Makoshika State Park, cool off with a cocktail and satisfy your hunger with a burger at Gunner’s Ridge Bar and Grill in Glendive. On a nice evening, sit outside on the covered patio and take in a view of the Yellowstone River as it flows lazily by.

The burger featured on the Burger Trail is a large patty of Kobe beef on a toasted brioche bun with Havarti and blue cheese crumbles, lettuce, and tomato, thus the name: the Red, White, and Blue Burger. Online: Gunner’s Ridge Bar and Grill on Facebook.

Walk through the door of June’s Bungalow in Colstrip and meet the unexpected. It’s a charming former home that feels like you’re eating at grandma’s. There’s no big commercial kitchen — it’s just a quaint little hidey hole in the middle of a neighborhood.

But it’s part of the Burger Trail and a place to find wonderful made-from-scratch offerings, like the mango salsa piled atop the Mango Burger along with guacamole and Havarti cheese. Online: June’s Bungalow on Facebook.

There are more places to discover great burgers along the trail. For a complete list, visit southeastmontana.com.

Montana is a huge state with a small population, so if you get off the main highways and travel the dirt roads, it’s easy to feel quite isolated, and chances are you’ll encounter at least one abandoned, creepy-looking building or house.

But visit the small town of Terry, spend the night and you may encounter a ghostly apparition at The Kempton Hotel, the oldest continuously operated hotel in Montana. Owner Russ Schwartz says there are four spirits roaming the old rooms and hallways.

“I’ve figured out who the ghosts are,” Russ adds, counting off on one hand: Two are children who died of typhoid at the hotel; one is a nurse who came to town to help with the typhoid epidemic and became a victim of the virus herself; and the fourth, Bernie Kempton, was the son of the man who built the hotel in 1902.

Book a room at kemptonhotel.com — if you dare.

If you’re not quite ready for the big leagues of fishing or it’s been a while since you hooked a big one, you might find your footing at Big Horn Valley Ranch, one of just a handful of resorts in Fort Smith on the Crow Reservation. It’s also one of the only places around that offers full-service dining.  The resort has cabins with wi-fi and small kitchens. Private baths are offered in a central bathhouse.

In the center of the resort is a large stocked pond where you can wet a line and get a few tips from outfitter Paul Garrison. He’ll bring the equipment if you don’t have your own, and with his help, you might just reel in the big one.

From saddles to fancy ladies’ hats, the Range Riders Museum in Miles City is a tell-all walk through the history of the West. The museum, founded in 1939, has a collection that’s taken more than 70 years to amass and now encompasses more than 13 acres — 38,000 square feet — of unexpected finds under one roof.

Exhibits cover everything from the dinosaur age to the history of Native Americans who first lived in the area, and the soldiers and pioneers who followed. It’s a remarkable look at the people and things that became Montana.

Cruising Down the Bighorn

Montana is home to seven Indian reservations, two of which are located in Southeastern Montana, including the Crow Reservation and its Bighorn River, one of the best trout-fishing rivers in America.

The river runs through a spectacular canyon and unless you are a member of the Crow Nation, the only way to see it is by cruising down the river.

You’ll pass beautiful cliffs streaked with brick red from the oxidized iron minerals found in the sandstone and some of the most spectacular rock formations you’re ever likely to see.

Katie Steele and her husband Tyler own Shade Tree Outfitters (bighornproguide.com) and specialize in water fun along the Bighorn — fishing, boating, picnicking. You name it, they can probably arrange it, Katie says.

Steering her 18-foot Smokercraft downriver, she adds: “I love sharing the beauty of this river with other people.”

Anne Braly’s trip was sponsored by Southeast Montana Tourism but the opinions are her own.