Couchsurfing Across the USA

What I’ve learned from Couchsurfing Across the USA

After a foray into the world of Couchsurfing as part of a budget trip across the States, Mina Kerr-Lazenby has picked up a thing or two about getting the most out of the experience. Here are her tips on utilizing the network fully.

I signed up to Couchsurfing just a few months ago with only one thing in mind: saving money.

A networking website where users offer their homes to travelers for free, it seemed like a no-brainer accommodation option for the three months I had planned to travel across the USA. Why splurge on a hotel when I can stay somewhere equally as comforting without spending a dime?

What Couchsurfing Really Is

Since then I’ve come to understand Couchsurfing for what it really is, not merely a means of budgeting for the thrifty traveler, but a community where building relationships, and learning to travel authentically, is the driving force.

For those looking to make their first foray into the Couchsurfing world, it’s worth bearing in mind that going into the experience with nothing more than a money mindset will likely leave the host and surfer feeling discontented.

The level of involvement from each host varies from person to person, but most will expect some sort of exchange in one form or another. For some, it may be a conversation over dinner, while others may want to spend the day showing their favorite haunts or local adventure spots. Indulge them. While it isn’t expected that the traveler complies, the least you can do after snapping up free lodging in their home is hang around with them for a bit.

During a days-long stint in Phoenix, Arizona, I lodged with a septuagenarian named Steve. He offered to take me for a moderate hike in the nearby Superstition mountains and, despite having already made plans to venture into the city that day, I took him up on his offer.

Our 7 am hike evolved into a four-hour-long strenuous trek, followed by a tiki tour of the surrounding desert and old cowboy towns. He recounted stories from his extensive travels while pointing out all the natural wonders of the mountains and the must-see hallmarks of the nearby Globe town.

I was exhausted when we arrived home come evening time  – my stamina pitiful when compared with the gaffer’s relentless energy – but incredibly grateful for the experience.

I had been given the opportunity to explore little pockets of outer Phoenix I would have otherwise been unable to get to (Phoenix’s public transport is dire, fyi), while Steve relished in his tour guide role and was given an ear to listen to the travel tales his children and grandchildren would have likely long been bored by.

With Couchsurfing it pays to adhere to the number one traveler rule: don’t turn down anything (within reason) and be as open-minded as possible.

I even learned about the ins and outs of Polyamory from one host, who invited me for dinner with her partner, her partner’s wife, and her partner’s, wife’s, boyfriend. Put simply, whether discovering the finest local taco joint or understanding the basics of the practice or local cultural belief, there is always something to be learned along the way.

With hosts offering a lesson in one form or another, a bed (sofa or mattress) in their home, pick-up services from the bus station, and, in more cases than not, the food in their fridge, it’s worth bearing in mind what can be offered in return. For certain hosts a listening ear will suffice, company is all they are yearning for. In most cases though, it pays to go the extra mile – cooking dinner one evening, purchasing a round of drinks, or simply doing the dishes goes a long way.

My first few forays into Couchsurfing had been planned while I was still in New Zealand, where I was living at the time. The hosts I had teed up had expressed a desire to travel to New Zealand, and so when I visited I offered some revered Kiwi chocolate as a gift. It was an inexpensive offering that only required a small effort on my part, but one that was thoughtful and showed gratitude.

While relationship building is key, not all hosts are looking for a new friendship. Some are simply offering a bed to crash in and will otherwise keep to themselves. That’s okay too. In some smaller cities or towns, the Couchsurfing pool will be scarce or non-existent. Standards shouldn’t be lowered just to get a free night somewhere, a hotel will always be a better option than a host with no references and a questionable bio.

Plus, that one or two night’s stay in proper accommodation often provides a welcome reprieve from the social demands and adventuring that comes with staying in another person’s home.

During a brief stop in Amarillo, I was unable to find a host that looked reputable, so  I spent the evening in a local hotel. I had a bath, put a facemask on, and ate a curry in bed with Shrek on the TV. I reveled in my own company, the fact that nothing was expected of me, and Myers’ soothing Scottish accent. By the time I Couchsurfed next, I felt recharged. 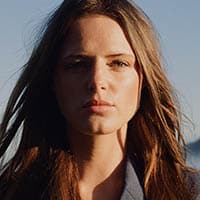 Mina Kerr-Lazenby is a British journalist who has written for a variety of publications internationally. During a five-year stint living in New Zealand, she worked as a senior writer for a high-end magazine and as a breaking news reporter for one of the country’s largest news organizations. After traveling the US for three months Mina settled in Vancouver, Canada, where she is now a freelance writer.