Walking Coast to Coast, from St. Bees Head, the 192-mile trail from the Irish Sea to the North Sea–A Story of Two Walks

We set out intending to “Walk Across England,” the cross-country trek popularized by Alfred Wainwright, a preeminent British fellwalker.

Beginning on the west coast at St. Bees Head, the 192-mile trail traverses three national parks in northern England and stretches from the Irish Sea to the North Sea.

But it only lasted four days until a calamity struck. It would take another year to complete the hike we had to abruptly halt after my fall.

Ann and I had been hiking for four days when we crested the summit of the Lake District’s tallest peak, Scafell Pike.

Below us, the steep landscape of northern England looked soft, as though a giant had thrown a kelly-green cloth over the land, smoothing every prominence and slope.

Brimming with a sense of accomplishment, we began our 2,500-foot descent of Kidsty Pike. We had the mountain to ourselves. I was so caught up in the moment and the beauty of the rugged countryside that I turned toward Ann and sang to her, oblivious to the dangers the steep path presented.

“Careful,” she warned, pointing to the loose scree covering the trail. Layers of tiny bits of stone under my feet suddenly acted like ball bearings, turning my hiking boots into roller skates. I slipped, then fell and cartwheeled, cutting my arms and face on the jagged rocks lining the trail. A pained “Aaaargh!” echoed down the mountain as I landed face up, splayed across the trail with my left leg twisted under me in an unnatural ragdoll shape.

It took more than a few minutes of focused breathing before I could talk. When I attempted to stand, I leaned heavily on Ann’s shoulder and tested my leg, gingerly shifting my weight from right to left. Pain shot through my ankle and knee, forcing me to sit back down and take another deep breath.

Now what? High on this lonesome, untamed mountaintop, we didn’t have cell service and were more than a mile from the nearest paved road. “Do you want me to go down and get help?” Ann asked.“Just give me another minute,” I said, once more getting my breathing back to normal. Ann gave me her hiking poles, and I tried rising again, this time making it to my feet and taking a few hobbling steps. “I can do it,” I said without conviction.

The only option was to hike down. One excruciating step at a time, clench-jawed determination—Ann said it was stubbornness—got me down the mountain. It took an hour and a half for the two of us to descend the mile to the road, where we flagged down a Good Samaritan who drove us to town.

So ended our “Walk Across England,” only five days into the cross-country trek.

Due to Wainwright’s four conditions in selecting the route—to avoid sizable towns, link together three scenic parks, keep to high ground, and use only rights-of-way and areas of open access—the “Coast to Coast” is an unofficial, and sometimes unmarked, trail through some of England’s most spectacular countryside.

“We’re Going to Do That Walk!”

“We’re going to do that walk!” Ann and I had promised each other over the years, and the previous spring we’d finally bought our tickets and flown to London. The Coast to Coast begins in the Lake District, the enchanting high country in northwestern England where the Brits travel when they go on vacation.

We’d trekked into emerald fells (mountainous areas) and skirted heavenly tarns (pristine mountain lakes) where the water was as blue as the sky. On the fifth day of walking, Kidsty Pike signaled the end of the Lake District and the beginning of the Yorkshire Dales. It was where our walk would end.

The Coast to Coast Trip Was Over

An English doctor examined me at a local clinic and informed us the trip was over. What I had thought was a bad sprain turned out to be an ankle broken in two places, along with a torn lateral meniscus. Returning home, I settled into a round of X-rays, MRIs, and cortisone shots, followed by ten weeks of physical therapy and heaps of ibuprofen, all the while imagining a return to Wainwright’s walk.

The following spring, healed, we were back at the top of Kidsty Pike, standing where I had fallen and ready to resume our journey.

On our second trip, we did some things differently. I joined Ann (the person who didn’t fall) in using hiking poles. We switched our backpacks for lighter rucksacks and let a “Sherpa service” do the heavy lifting. We also gave ourselves a little more time, breaking some long-distance days into easier segments.

As we trekked through the Yorkshire Dales—the open, rolling hills of the English countryside—we traversed grassy pastures, passed solitary stone-walled cottages with slate roofs, and crossed rock bridges with wooden picket fences. I expected to see James Herriot amble by on a veterinarian’s errand.

Ann booked nightly bed-and-breakfast accommodations ahead of time to assure us lodging at the end of each day, as well as a cold pint. And since the small towns—villages, really—sometimes had only one pub, we developed a nodding acquaintance with our fellow walkers. Ann and I would pass, or be passed, by people on the trail, which opened the door to conversation.

Invariably we would encounter our trail mates again in the evening, at a village restaurant or pub, and pick up the thread. A breezy sense of camaraderie developed, and friendships formed as stories were shared.

We met a couple from New Zealand, three women from Virginia who had been schoolmates, a group from Australia, two gentlemen from Scotland reprising the walk they’d done as young men thirty years ago, and three English brothers who were tent camping. “And we’re still talking to each other!” one brother said; another replied, “We’re not done yet . . .”

We even met a British couple who asked, “Are you the one who broke your leg here last year?” News travels along the trail.

What started as a collection of strangers became a community, connected through a common undertaking. We were a loosely knit, tightly woven nomadic group. When we approached the east coast, we all agreed to meet at Wainwright’s Bar in the little town of Robin Hood’s Bay, our collective destination.

Heading east, we crossed gently sloping plains consisting of low-growing purple and olive-green vegetation stretching all the way to the coast. These are the moors: the harsh beauty that inspired Wuthering Heights and Jane Eyre. The terrain foretold our journey’s end, and on the morning of our last day, we finally caught a glimpse of the North Sea.

From there, Ann and I turned south, hugging the majestic coastline along tabletop bluffs, feeling as though we were treading on the edge of the world. Below us, mammoth expanses of limestone jutted steeply into crashing waves.

We ended our trek by following a footpath along a curving bay. After two weeks of the beautifully remote English countryside, we entered Robin Hood’s Bay, exultant. Suddenly we were walking through neighborhoods, then streets filled with shops and restaurants, shoulder to shoulder with tourists and parents taking their kids to the beach.

Wandering through the town, Ann and I found the Bay Hotel and climbed the creaky wooden stairs to Wainwright’s Bar, the last of the hikers to arrive. Wainwright’s—popular with locals and walkers—was packed and noisy, and I jostled my way to the bartender as Ann weaved through the crowd, searching for a table.

A few minutes later, with a pint in each hand, I rendezvoused with Ann in the middle of the room. “Cheers!” she said.

“Here’s to the Coast to Coast!” I grinned.

“And to Wainwright,” she answered. We clinked our glasses, toasting our accomplishment. “We’re in good company,” Ann continued. “I congratulated the British brothers and said hello to the couple from New Zealand, and the three ladies from Virginia are holding a table for us in the back.”

We threaded our way through the crowd and, joining our Coast to Coast companions, began comparing stories. Before long, a local leaned our way and asked the Virginia ladies how long it had taken them.

The man nodded and turned to us. “And you folks?”Ann and I smiled at each other, then I held my glass high and, in a triumphant voice, proclaimed, “A year!”He looked confused, then grinned as everyone around us cheered. 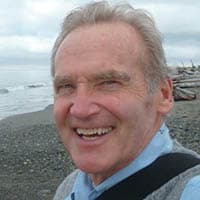 Mike and Ann live in the small town of Port Angeles, WA, on the Olympic Peninsula, where the mountains meet the sea. Mike is a freelance writer and has a web presence at mikenolanstoryteller.com