South Island adventuring races the gamut from bungee jumping and jet-boating to paragliding and sky-diving, but after doing it all I found my tastes ran to wet and ice, from Class IV rafting and motor-boating the Marlborough Sounds to tramping around on a blue-ice glacier. And it all began like this.

Rafting addicts start young, like forty years ago when I built my first and very unwieldy raft from two road-grader inner-tubes, six 30-gallon oil drums, a slew of 1″ x 8″ planks and coils of bailing wire to raft the Colorado River above Moab, Utah.

That multi-day episode ended after a whirlpool catapulted four of us, including wife number one, onto a sheer rock cliff.

Though wife one was gallantly rescued and dropped safely on the other side of the river, the side with a road, marriage number one never seemed quite the same.

A Series of Catapults

Incorrigible me, heading first thing in Christchurch to sign up for Rangitata Rafting, advertised as a calm float before a series of catapults over Class V rapids. I was raring to go, wife number three safely back in the States and wife number two being a whole ‘nother story.

Funny how things never go quite as advertised or envisioned. The rafting started in the Southern Alps near the source of the Rangitata River, but far enough downstream that the river was already a highway of icy-blue bliss. Thus we started calmly enough after a rousing jump in the air before boarding, perhaps to breed camaraderie and good photo ops, though the best were yet to come.

When we hit the Class V rapids all hell broke loose, and passengers too, several capsizing in a cauldron of raging ice-water, fortunately encased in wet-suits.

One raft went straight down but with self-bailing popped right up again, the novice occupants drenched and scared so shit-less they couldn’t paddle, likely feeling good about still being alive and inside the raft; good thing the helmsmen were fabulously experienced navigators/paddlers.

After somehow surviving the gauntlet, I hung out below the 400 meters (yards) of Class V rapids, watching poised rescuers coiling line for tossing to potentially capsized rafters.

And sure enough a raft hit a sheer stone wall and capsized everyone into the swirling stream, from the frying pan into the icy fire, perfectly fine with wife number three safely elsewhere.

Franz Josef Glacier is one of two in the world dropping into a rainforest. The other is a few kilometers down the road and named Fox. I’d hiked Fox nine years previous; this time it had to be Franz Josef so I signed up for the full day walkabout.

The day began with chaos as 66 folks lined up for the issuance of gear ranging from padded overalls and heavy boots to crampons and wooly hats.

At the trailhead our six guides imposed instant order when we began a mile’s tromp to ice that had receded for a century but began advancing again in 1985.

Macho guides in shorts and skimpy short-sleeved shirts chopped ice steps onto the glacier and we gingerly clomped up, wrapped in parkas and hats from hair to toe.

We tramped along the bottoms of crevasses, tightly bound by soaring walls of neon-blue ice that tripped the minds, dwarfed by frigid ice skyscrapers with cameras clicking like knitting needles, capturing ice waves cascading for kilometers to the horizon.

The guides were prompt to climb high on pinnacles, knocking them down so they didn’t knock us down, providing excellent photo ops.

But the macho act went a bit far, our guide asking me to retrieve his pack over a chasm and hand it up the line. I popped over the chasm, grabbing the pack one-handed, knowing it was practically leaden, jumped back across and handed it to the lady ahead of me, who promptly collapsed under the weight to guffaws from the guide.

Thus the guides (at least ours) were competent but not particularly copasetic. Still, the scenery was spectacular as only the vivid blue of ancient ice can be.

The highlights were tight blue tunnels we squeezed through for meters on end, both horizontal and vertical, naturally containing miniature waterfalls for the anointing of novice trekkers.

Mid-day we scarfed down our toted-in lunches and at the end, back in town, we anxiously reunited with the warm and the drinking.

The best came last, a personal motor-boat on the incredible Marlborough Sounds, which on the northeast corner of South Island contain a full fifth of New Zealand’s jagged coast line. The Sounds harbor fancy celebrity homes and resorts, working ranches and innumerable nooks, crannies and beaches over 1000 kilometers (almost the same in miles) in secretive intimacy.

The motor boats and the location were the winners. The boats were designed out of lightweight welded aluminum by the proprietor of Waterway Boat Safaris, the formidable Leicester Bull.

These speedo little darlings pranced atop the water like sprites, jumping onto a plane or putting along at instant will. The day I went was brilliant, which likely contributed mightily to the experience, compared to cloudy days for rafting and glaciering.

Two couples of Brits and I showed up bushy-tailed and anxious. Could we handle our individual craft?

But Leicester made it easy with an instructive run-down and we were completely relieved when the outboards sparked on a dime.

We embarked in the spiffy little runabouts on a bay of reflections with little or no wind, contributing to major photo ops.

Leicester led us into the bays, along deserted beaches and stopped for explanations of the gorgeous underwater and extensive green-lipped mussel-growing culture that is the area’s economic mainstay.

We were flummoxed by the stingless jelly fish dripping goo over outstretched hands and entranced with the limitless scenic vistas.

And afterwards Leicester burned souvenir CDs gratis with photos of our little adventure making the whole enchilada something wives one, two OR three would have adored. In fact wife numero tres emailed that she wanted to try one of those darling little boats.

Rangitata rafting is $195 (US$138) for the full day, including 1 ½ hours transportation from Christchurch to the beach launch, lunch, dinner and full gear. See rafts.co.nz.

A full day on Franz Josef glacier including all gear, transport and bringing your own lunch (the boots will kill your feet, especially if like me you have bone-spurs on your heels) is $160 (US$112). See franzjosefglacier.com. 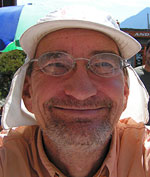 David Rich has been an international traveler, writer, and photographer for the last 16 years, living in more than 140 countries to date. He is a full-time international traveler, an occupation he finds far preferable to his former professions of law professor and trial lawyer, from which he says he’s now “mostly recovered.”Read about David Rich’s new book RV the World
Read David Rich’s story: New Zealand’s North Island: Top Three Escapades