Budva and Cetinje: the Present Hotspot and the Former Capital of Montenegro

A Russian friend used to rave constantly about Montenegro, the people and history there, and specifically, Budva.

A town of almost 20,000 people, it sits on the Adriatic coast, 10 kilometers north of the picturesque resort of Sveti Stefan in the central region of the country.

I took a bus for €5 directly from Kotor, a smaller town in a bay with tourism centered around the old town, and was pleasantly surprised by the sprawl of Budva.

The old town is defended by a Medieval stone wall and juts out into the water, leading to spectacular views all along the wall. 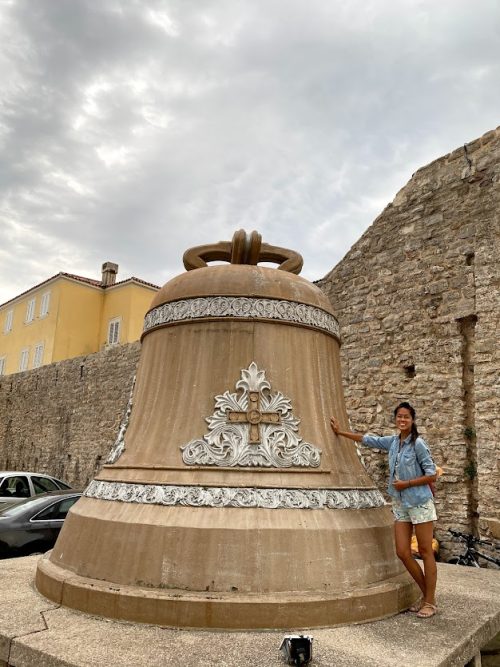 For €1, I accessed the roundabout walkway and took in the view of the neighboring marina, full of wealthy patrons’ yachts and taxi boats eagerly awaiting tourists to negotiate a boat tour.

Property rented out to restaurants for tourism and business had gardens packed with tables and umbrellas.

Private homes were interspersed, with signs of life only evident in the occasional clothesline of drying laundry and children’s toys in the backyard.

Towers and arched gates punctuate the walls, allowing people in and out of the old town. The narrow alleyways are a maze of souvenir shops, pizza stands, and clothing stories sprinkled with cannons and churches.

The many squares of the citadel proudly show off the centuries-old churches, such as the Holy Trinity Orthodox church and St. Ivan Church, with occasional ramps leading from cobblestoned streets to raised platforms.

Street performers welcomed visitors into courtyards with their tunes, and stray cats and dogs weave in and out of the labyrinth.

By the exterior of the walls, in one corner, an enormous anchor and decorated bell sit, movie props which were left behind when shooting was completed. The bell now has an entrance from the backside of it leading into a restaurant. 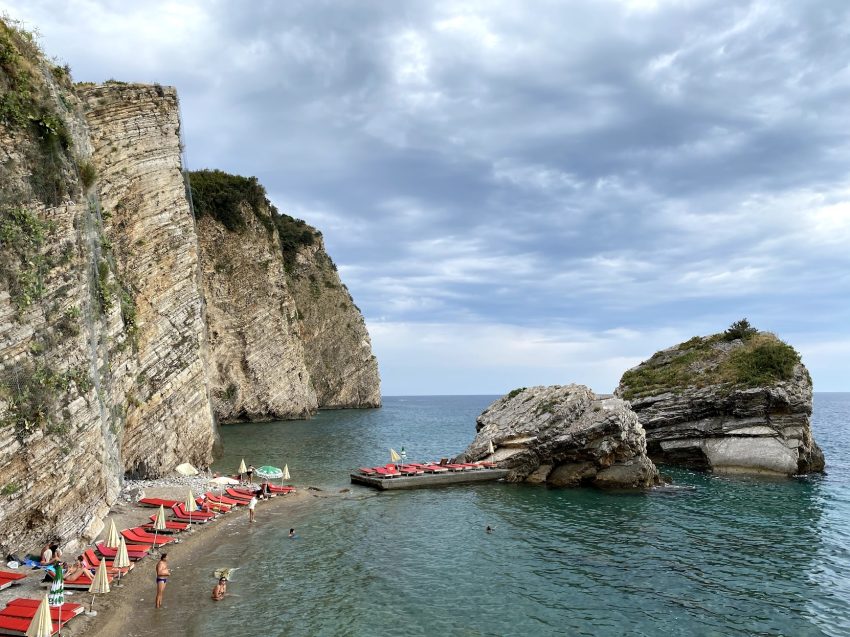 Along the other entrance of the old town, a sandy beach is complete with a bar and restaurant, and a long boardwalk that heads into the water perfect for sunset photographers and social media influencers.

Further along, just past the restaurant, a skinny walkway that hugs the cliffs presents a scenic view of the old town’s walls, the mountains in the distance, and umbrellas on the beach.

At the end of the 250-meter path is Mogren Beach, the most popular in the area for its idyllic location, at the foot of some cliffs and isolated in Cape Mogren.

One of the most popular sites in town is located on one of the rocks along the pathway.

A boulder holds an iconic statue of a dancer posing, and at night time the silhouette stands out with the reflective water and city wall lights in the background.

The bronze statue has many myths surrounding its origin – one telling of a brokenhearted woman awaiting her sailor who was lost at sea, another of a swimmer whose boyfriend was killed in a shark attack – all of which revolve around love and loyalty.

From the pathway, as well as the old town city walls, Sveti Nikola is visible just one kilometer away.

An uninhabited island that’s 2 kilometers long and rises 120 meters into the air at its peak, Sveti Nikola also has three stony beaches which are popular for tourists from Budva.

To access the boats, I headed down the marina to a restaurant that had a long pier and waited at the end for the 20-passenger motorboat to arrive. Every half an hour, the boats depart for €4 roundtrip.

Farther down the Budva Riviera, past casinos, a grand bazaar, and dozens of seafood restaurants, another vendor and departure point offers tickets for €3.

Typically, these also include a pass by Sveti Stefan for photos from afar, as it’s a private island, but since it was later in the afternoon, that wasn’t an option for me.

​The boat ride is a short 10 minutes away through still waters, and the beaches are immediately at the point of disembarking.

Cushions and lounge chairs are available for rent, though many opt to save €5 and lay on their towels instead.

Two bar/restaurants offer refreshments between the three beaches, and three ping pong tables are available a bit more inland, safe in the shade from the strong sunlight.

The center of the island goes uphill, and deer live safely there, undisturbed by the tourists who aren’t permitted to enter the pathways leading up into the trees and the forest.

A very popular day trip from Budva, for anyone who wants a change of pace from the nightclubs and pubs on the beaches of Budva, is Cetinje, the former capital city of Montenegro and just a 45-minute bus ride up into the nearby mountains.

Buses depart from the terminal stations every 20-30 minutes and cost €3.

The historical and religious center of the country, Cetinje was founded in a small valley in the 15th century by Ivan Crnojevic.

An educated man in the arts and politics, he held together with the country at the time they were under attack from the Venetian and Ottoman empires.

There are numerous structures still standing today that are visited and revered by the Montenegrins as essential chapters and symbols of their history.

When I left the small bus station and headed towards town, one of the first main ones to run into was the Cetinje Royal Palace, directly on the pedestrian street in town.

Formerly the central point for the royal family, it is today a large, red museum in the art nouveau style dedicated to the last ruler of Montenegro, King Nikola I Petrović Njegoš. It costs €5 to enter and is open daily.

Cutting down one of the side streets to get off the pedestrian street, I crossed through a park and found myself at the Cetinje Monastery.

The one that I encountered was primarily from 1786 and had several stories in the structure.

Stairs led up to it from the smooth stone streets, and a man welcomed me, redirecting me to a box of scarves and wraps to cover my legs and shoulders.

Inside the main unit, many religious relics were housed in their treasury, and a nearby abbot mentioned they were some of the most important in all the Balkans.

Directly across the road from the monastery, with several policemen standing by, is Biljarda. The massive structure was designed by statesman Petar II Petrovic Njegos in 1838 and was influenced by Russian design.

Originally just a long rectangular building, he added two courtyards on both sides so it created a large square in the end.

The walls have circular structures at each corner, protecting this political and cultural center, which were relocated here from the monastery by the Montenegrin tribal chiefs.

The name came from the English game of billiards, which was a preferred activity of Petar II and he had a table in the center of the structure.

Nowadays, the structure has been converted into a museum for him, who was not only a politician but also a monk and one of the country’s most famous poets.

In front of the entrance to Biljard, off to the side and down some stone steps, is the Court Church. Built in memory of the former monastery which was destroyed by the Turks in 1692, the new church was built in 1886 on the remains of this former religious center of the country by King Nikola.

As the ruler of the country at the peak of its development, King Nikola had carried out several constitutional and educational reforms.

In 1989, alongside his wife Queen Milena, his remains were moved to the church. Similarly, the remains of founder Ivan Crnojevic were also relocated to the church, which is now considered a symbolic burial ground for the country’s most historic and prominent figures.

To the side of the monastery, I knew there was a path leading to two viewpoints. I followed a short flight of steps which merged to a paved, curving road that led me to a grassy open space.

Two policemen chatted with one another, casually eyeing me as I took the rocky path to the right, ducking under some branches and stepping carefully around thorny bushes.

I finally emerged by a small stone dome with a cross on top and took in the view over Cetinje. Off to the distance on my right, I could see the second viewpoint I wanted to get to – a mausoleum which many people had advised I check out.

Back in the grassy opening, I decided to veer left but before I could get very far, the policemen whistled at me and beckoned for me to return.

In rapid Montenegrin with large hand gestures, they pointed at my shoes and I managed to understand “snakes”.

One pointed over the edge, down below to another concrete road, and I understood that to be a safer path to the mausoleum.

I headed back down and turning a different direction at the monastery, I found the windy path.

It took a little over 25 minutes to make the steep ascent, and soon I felt the breeze flowing across the clearing.

The Mausoleum of Bishop Vladika Danilo greeted me, at the end of a large open space with a dome over the sarcophagus.

A metal fence keeps tourists from tipping over the edge of the hill as they’re taking in the view.

The Orlov Krš, which literally translates to Eagle’s Rock, had housed the body of the bishop since 1897, and symbols of his religious and secular rule were evident on the sarcophagus and the pillars up to the dome.

As a prominent leader at the end of the 17th century, the bishop had close connections with the Russian empire in their fight against the Turkish, and top French architect Didier Frucht was brought in for this project. From the vantage point, the bishop symbolically watches over his city.

Annie Elle is originally from Los Angeles but has lived and worked abroad since 2011. She is currently living in Douala, Cameroon, working in international education. She loves discovering new fruits, learning different board games, and taking Afrostep dance classes.