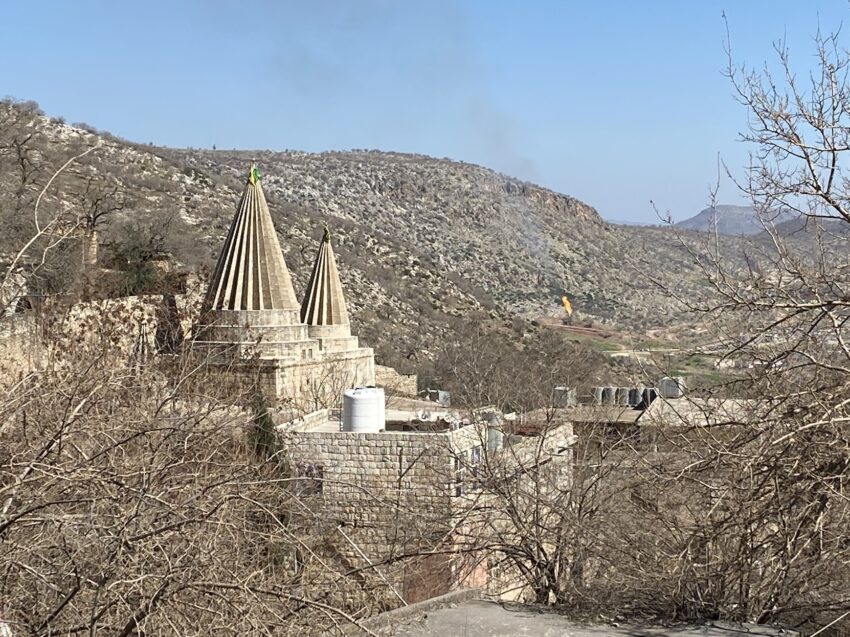 Lalesh: The Mecca of the Yazidi People

When I moved to Kurdistan, I immediately started to hear about the plight of the Yazidi people of northern Iraq. As a religious 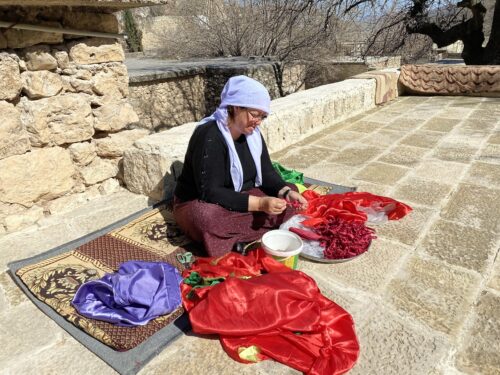 ethnic minority group from the region, they hold firm to their own customs and beliefs, separate from the Kurds or their Arab neighbors.

For instance, they don’t eat lettuce, and the women have restrictions on cutting their hair. During the 2014 genocide committed by ISIL, who viewed the Yazidis as demon-worshippers, thousands of Yazidis were killed and hundreds of thousands remain displaced today.

Ashamed that I didn’t know more before, I coordinated a day trip to their holy site of Lalesh.

This small village in the valley of the Shekhan district in the Duhok governorate is their religious focal point, at a location believed to be where Noah took apart the ark after the flood, thus, seen as the birth of a new civilization.

The first Wednesday of April is the largest holiday for Yazidis when they congregate at this site, although for the religiously devout, a multi-day pilgrimage should be made annually.  Prior to the 2014 attacks, this area was home to the second-largest population of Yazidis in the world. 39 holy sites and temples were destroyed by ISIL, so in recent years, many of the surviving locations have been undergoing renovations and massive preservation efforts.

A lone, indiscriminate road winds up a hill where eventually, it ends in a small parking area passengers have to get out and walk. A handful of guards briefly check the vehicles and remind the visitors that shoes must be taken off past the entrance. Up a short dirt path, the village opens up to the left.

On the right, the main temple entrance lies in an open dirt square. A wall of arches with olive trees sprouting out between them line the back wall.

In the center of the square, a miniature version of the iconic Yazidi temple conical top stands.

These easily identifiable roof shapes have pointed tops, oftentimes with the Kurdish flag waving from them, and angled edges that radiate out towards a flat base.

Because of the angles of the edges, the shape at the base, when viewed from directly above or below, is a multi-pointed star or sun. Since the site is the ‘home of the sun’, figures of this sun shape can be found all over Lalesh.

Shoes Left at the Doorway

Massive stones on the ground have small gaps between them, just wide enough for grass to poke out and force visitors to pay attention to where they’re stepping.

Shoes are neatly left at the stone doorway on the right of the square. The stone threshold bears markings on the bottom and top, etched in and carefully stepped over—no one must put their foot on top of the sacred markings. Occasionally, a small throw rug or carpeting covers the markings so they’re not visible or exposed to the elements but everyone is aware of their protective presence.

From the stone entrance, a flight of beige-colored stairs in front lead upwards to a locked terrace, and another flight to the right turn downwards to a bright open plaza. Two dead trees are in the center, along with old tablets that had Arabic written on them. A water spout lies at the bottom of the stairs, where holy water streams through and anyone can drink it with a metal cup chained and hanging nearby.

Directly opposite the bottom of the stairs, a large stone room lays open with windows and flat surfaces lining the walls with a couple of sparse metal shelving units on top of them.

Round, flat Kurdish bread covers these surfaces, some nearly intact and still soft, while others are torn off or older and harder.

Due to the ubiquitous nature of large stone ovens throughout the country which bakes massive amounts of this bread every day, the locals in the region have come into the habit of saving leftover bread and tying them into plastic bags from their doorways.

They are collected and left at the temple for anyone to eat, whether they are impoverished or hungry, but it does not get thrown away.

Above every doorway, dried red anemones are hung upside down, attached by an egg-shell white plaster that was left to dry. Their presence welcomes the angels into their homes and allows them to recognize their followers. They do not take down the flowers but let them naturally wilt and fall off.

In the corner of the sunny plaza, the door to the main structure lies open. I’d been warned beforehand to bring extra socks and I realized at that moment why.

Padding barefoot, anyone would be able to feel the piercing cold of the stones indoors which never receive the exposure of direct sunlight.

Pointed arches in the largest room for congregations have strings of colorful ribbon decorating the main hall. Large Yazidi holidays, such as New Year or the fast of Ezdi, see the main hall packed with attendees.

Cold, dark passageways lead into smaller subsequent chambers filled with olive oil jugs, kept there in reserve with a number of handprints on the walls showing remnants of past pilgrimages. The guide explained that normally electric lights would have a handful of lightbulbs lighting our way, but due to the construction by international aid organizations, there wasn’t any power available in the structure.

At one end of the largest oil jug room, a rectangular stone protrudes out from the wall and a red rag lies in the corner.

The guide explained that visitors were given three chances to throw the red rag onto the top end of the rectangle, making a wish at the same time, and if the rag lands on the top, the wish would come true.

This proved harder to do than it sounded, but two out of three of us made the target platform in our three attempts each.

Further deeper into the structure, we came upon the central point of the entire temple and village – the tomb of Sheikh Adi ibn Musafir, a Muslim sheik who is a key religious figure central to the Yazidi religion.

The tale of the sheik illustrates how God had entrusted the care of the world with seven angels, and Malak Taus, or Tawsi Melek, was the leader of the seven archangels.

The sheik is seen as a reincarnation of Malak Taus, which translates to “the peacock angel”. For this reason, images of the peacock are visible in various stones and shapes throughout the village.

At the end of the room with the tomb, a small opening is blocked off, sealed with small stones. The guide explained that several chambers were still closed off like that, starting from 2014 when Yazidis fled there as refugees from ISIL and hid in the temple, partially for their protection but also to defend their holy site.

Going back towards the main chamber, a skinny stone stairway leads downwards. The holy water springs flow under the temple and underneath most of the village, cold, clean and untainted by outside pollutants.

Surprisingly, the first guide allowed us to walk down there, soaking our socks in the process the closer we got to the main spout, before a second guide called us back, warning us not to taint the water.

Up into the Hills

Across the main road, on the left side of the village, the majority of the residential homes lie with open-air windows and flat rooftops fully utilized for drying laundry and eating meals in the sun.

A labyrinth of intersecting steps and rooftops are interrupted by doorways and conical temple tops. Various symbols, besides the peacock, adorn the stones – snakes, pipes, multi-pointed stars, and indiscriminate shapes are spotted on the walls as well as the ground leading up to other abodes.

Amidst the stones charred by years of candle use just below, and crumbling structures with overgrown grass climbing up the sides, signs of modernity are mixed in with electric outlets built into the newer, renovated buildings and ceiling fans by the latest Turkish companies.

From the rooftops, we could look down and see groups of men heartily enjoying their meal together on the rugs thrown loosely around the closest open space.

They waved and called us over to eat with them, as we politely declined and continued downwards back towards the exit.

As we carefully stepped around some grates that protect the open water source for their holy water, an older woman, clad with the traditional Yazidi white headscarf, sat near a construction site of a conical temple top boiling some tea on some logs.

A string of construction workers on their lunch break gathered around the woman, settling into a post-lunch chai, and one of them gave me a small cup of steaming, sweet tea.

Left without a choice, we sat down to take advantage of the lunch break with them and one man pointed out the foreman and chief engineer of the renovation project.

The man, head wrapped with a tight turban and loose pants tied around the waist by a thick, cloth belt, plopped down across from me, poking at the logs in the metal fire pit.

He asked the men near him something in quick Kurdish, and they nodded and looked at us in response. Before we could ask, he started singing, eyes gazing off into the distance, taking deep breaths in between verses to gather himself.

Our guide translated that the slow, sad lyrics spoke of a tragic love story and that it was a special gift to hear, as it is Yazidi tradition to pass down stories and tales orally. 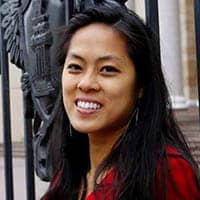 Annie Chen is an international educator who has lived and worked abroad for the last 10 years. Originally from Los Angeles, she is currently living in the Kurdistan region of Iraq working for an NGO. She has recently picked up ultimate frisbee and continues to passionately seek out new foods to try in her spare time.