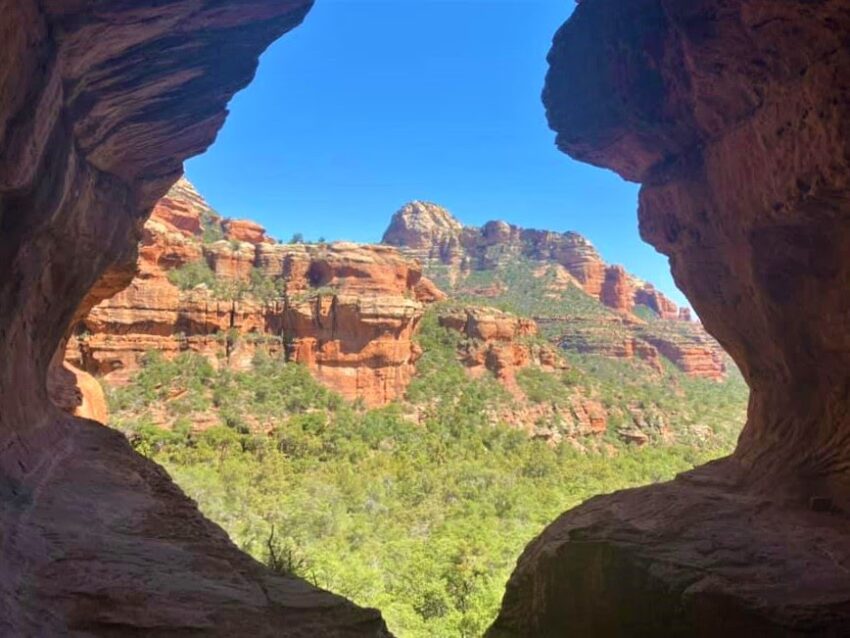 Have you ever traveled to a place that without any clear explanation or reason, everything felt different and you had an instantaneous sense of peace, connection, and enlightenment?

That happened the very first time we visited Sedona, Arizona. And it just keeps calling us back time and again.

Let’s just say that there’s so much more to Sedona than meets the eye.

Bask in the Beauty of Sedona

Located just 2 hours north of Phoenix, Sedona feels more like a world away.

As my husband and I got closer to Sedona on a recent road trip, we could feel the exhilaration as the massive red-rock buttes, eroded canyon walls, and towering mesas reaching toward cerulean skies suddenly appeared.

Each rock formation is a masterpiece in its own right. And there’s no question why it’s called “red rock country” once you’re here.

It’s easy to see what draws so many to Sedona, the gateway to Northern Arizona. Everywhere you look is breathtaking beauty. The area is surrounded by verdant green pine forests.

Oak Creek, a 12-mile-long river gorge meanders its way through the bottom of a picturesque canyon providing opportunities to enjoy waterfalls, swim, or tube its crystalline waters.

Hiking here provides one awe-inspiring view after another. And it’s as if hikers feel the need to speak in hushed tones, as to not disrupt the tranquil reverence of nature.

What Sedona’s Red Rocks Are Made Of 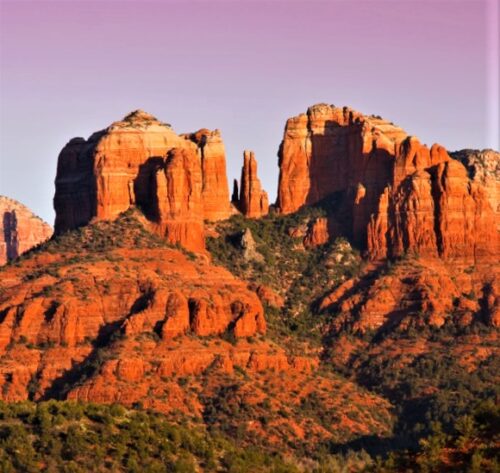 Sedona’s red rocks are formed by a unique layer of rock known as the Schnebly Hill Formation.

Being an inquisitive type, I had to know the source of the deep red coloring that Sedona is renowned for.

A local guide explained that it’s due to a thick layer of red to orange-colored sandstone found only in the Sedona vicinity.

The sandstone was deposited millions of years ago and its deep red hues are the result of hematite (iron oxide, aka… rust).

The top levels of the terrain are composed of basalt and limestone which are harder than the underlying sandstone.

The overall result is majestically stunning.

Now that we got that settled, it was time to visit these red rocks and find out about their widely-believed mystical powers.

Here, It’s All About the Vortex

Sedona is famous for its vortexes. So, what exactly is a vortex?

These swirling centers of energy conducive to healing, meditation, and self-exploration can’t been seen but many can sense their subtle energies.

Vortexes (or vortices) are places where the earth seems to coalesce and reverberate massive amounts of positive energy. One local describes these vortices as “Stonehenge unassembled.”

Vortex Sites Around the Globe

As a matter of fact, Stonehenge is another of the earth’s vortices.

Other major recognized world energy sites include the town of Glastonbury, England, Es Vedrà in Ibiza, Spain, the Great Pyramids of Egypt, and Mayan Ruins of Tulum, Mexico.

Of no surprise, many are located on ancient and sacred sites.

Two of the most well-known U.S. vortices include Haleakalā Crater in Maui and Mount Shasta, California.

These places have powerful spiritual properties that inspire prayer, meditation, and healing.

Many are reported to bring feelings of peace, harmony, balance and tranquility, while others are believed to promote personal reflection and deeper insight.

As a traveler to many of these locations, I can only say that whatever energies are found here, there’s a definitive connection to something much greater than ourselves.

Call it God, or the Universe, or the Powers that Be. You can’t see it, and though there may not be tangible scientific evidence, it’s definitely powerful and very special.

The recognition of these vortexes is not “New Age” because Native Americans have long believed in the mystical powers of these lands they deemed sacred.

It is also widely believed that in Sedona, these vortexes take on male and female energy characteristics.

Female essences represent compassionate, passive, and receptive energies, while the male is said to represent light, strength, and self-confidence.

It just so happens that Sedona’s vortexes are located in some of the most picturesque, breathtaking places imaginable.

The raw physical beauty of the landscape here is unforgettable. And most of these are easily accessible by hike, jeep tour, or off-roading.

Cathedral Rock is a natural sandstone butte that can be seen for miles on the Sedona skyline and one of the most photographed sights in Arizona.

So-named for its almost 5,000-foot elevation rising sharply above the desert floor, this stunning cathedral-like formation along crystalline Oak Creek makes hiking here half the fun.

The energy here is said to be the strongest of the seven vortexes and believed to cleanse the body, mind, and spirit. It’s an ideal place for deep meditation, and inner connection.

And honestly, it’s one of our favorite places in all of Sedona with a definite “wow” factor.

Sunsets at Airport Mesa are some of the most magnificent we’ve ever seen in Arizona and the 360-degree scenery is spectacular. Visitors know to arrive early at the high vista point near the airport as parking and best viewing spots are in high demand.

Watching the spectacle of color after the sun disappears behind the mountains is almost indescribable. Vortex energy here is said to strengthen the internal spirit and foster self-confidence.

Bell Rock is the first identifiable rock formation we see when arriving in Sedona from the south. To get up close and personal, a relatively easy 1.5-mile, well-maintained trail brings a majestic reward. The horizontal striations and color variations of the sedimentary rock are striking.

This electromagnetic vortex shaped like a bell contains immense quartz crystals beneath the sandstone creating intense energy for spiritual strength. It’s also known for its perfect balance between the regard for one’s own life, as well as for the lives of others.

Chapel of the Holy Cross

This impressive cathedral is perched halfway up a massive mesa. Getting here early will get you a good parking spot near a set of stairs leading to this fascinating chapel built into the rocks. Some say this is the most powerfully focused of Sedona’s vortices.

A red rock rises over what looks to be the head of an eagle said to protect the chapel from evil.

The scenery is spectacular but once inside the chapel, every visitor becomes silent, as if mesmerized by the love, harmony, joy, unity, and oneness of this sacred setting. So profound, it brought tears to my eyes.

An electromagnetic vortex of balanced energies, Boynton Canyon is renowned as the most mysterious and sacred of Sedona’s natural structures.

In ancient times, the native Yavapai-Apache would not even enter this canyon without first purifying themselves through fasting or deep meditation.

The energy here is said to be very spiritual, strengthening relationships and generating nourishment aligning mind, body and spirit.

The trail leading to the rock formations is long but fairly flat, well-marked, and maintained.

One of the top reasons that hikers love it here is the challenge of finding a secret Subway Cave.

Though not much of a secret anymore, it’s where the vortex is strongest, and it’s also home to the Sinagua ruins pit houses. It is so worth the trek.

Another option is hopping on a local Pink Jeep Adventure Tour which takes riders right up to the cave and ruins. We’ve done that as well.

A quiet, remote place to be in harmony with nature, Schnebly Hill’s vista provides amazing views of Sedona and Oak Creek Canyon.

Visitors can get here by hike or off-roading as we did. Its colorful rocks with hues of red, orange, brown, and green are over 330 million years old.

Schnebly’s vortex energy is also said to be balanced and aligning. Many say it’s a place to let go of negative patterns and energy, replacing them with positive energy providing cleansing and purification of the spirit.

The sheer size of the butte is truly something to behold, making it one of the most prominent features in the Sedona landscape.

Its remote location provides the solitude some seek when visiting Sedona.

The five-mile loop features easy to moderate hiking, and we found each part of the trail beautiful in its own right.

Avid hikers often call this their favorite Sedona hike. We now understand why.

This Sedona vortex radiates mystical spiritual energy. So much so, that many homeowners have chosen to build homes close to Courthouse Butte, making it one of the strongest vortexes for personal and spiritual growth.

Believe or Not Believe

We’ve had many friends ask our opinion of the Sedona vortices. More than choosing to believe or not to believe the concept, I can only say that Sedona provides one of the most beautiful and peaceful places we’ve ever visited.

Like the Great Pyramids, the Mayan Ruins of Tulum, and Maui’s Haleakalā, there is something profoundly special about this place that words cannot convey. It is something one can only sense and feel. Something that calls us back time and again.

Perhaps a sign in one of Sedona’s wellness shops says it best. “May the positive energy of the universe surround you, flow through you, bring peace to your mind, love to your heart, and calm to your spirit.”

We could all use a whole lot more of this these days. And for my sake, I’m completely sold on it!