A Grand Obsession with Collecting Countries

At twenty-three, William Simon Baekeland was well on his way to becoming the world’s best-traveled person.

The “billionaire” heir to a great plastics fortune had already visited 163 countries, but his real passion was finding ways to visit the world’s most challenging destinations—war-torn cities, disputed territories, and remote or officially off-limits islands at the margins of the map. 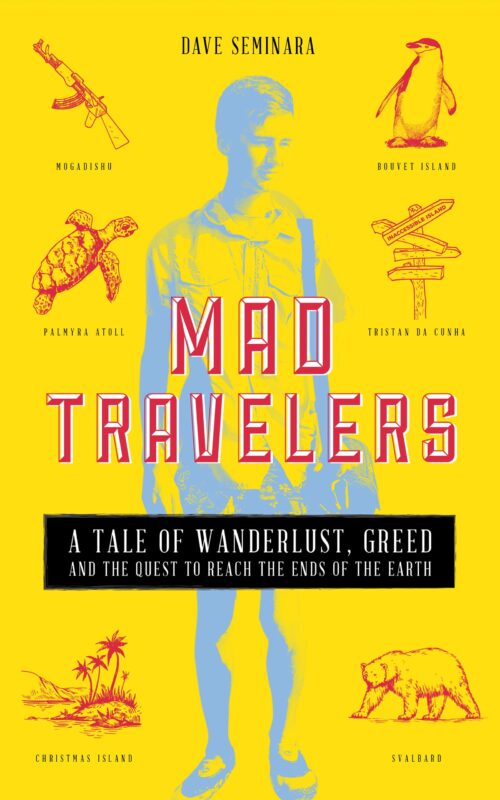 He earned rock-star status in the world of extreme travel by finding ingenious ways to bring the world’s most widely traveled people to difficult-to-reach and forbidden places.

But when his story began to unravel, an eccentric group of hyper-well-traveled country collectors was left wondering how they had allowed their obsession to blind them to the warning signs that William Baekeland wasn’t who they thought he was.

Mad Travelers: A Tale of Wanderlust, Greed and the Quest to Reach the Ends of the Earth delves deep inside the subculture of country collecting, taking readers to danger zones like Mogadishu and geographical oddities like Norway’s nearly impossible-to-reach Bouvet Island.

Along the way, this raucous tale of adventure and international intrigue illuminates the perils and pleasures of wanderlust while examining a fundamental question: why are some people compelled to travel, while others are content to stay home?

Mad Travelers is a perceptive and at times hilarious account of how the pursuit of everywhere put the world’s greatest travelers at the mercy of a brilliant young con man.  Now an HBO/MAX documentary.

Excerpt from the Book: Country Collecting

When did travelers start counting countries?

The hobby, some would say obsession, dates to 1954, when Bert Hemphill, the owner of a travel agency that pioneered round-the-world trips, and his tour director, Russell Davidson, founded the Travelers’ Century Club (TCC) in Los Angeles.

By 1960 they had forty-three members who were able to prove that they had traveled to a hundred or more countries.

Unlike a pair of other popular extreme travel clubs, like Most Traveled People (MTP) and NomadMania, TCC has never established formal rankings, but a 1974 profile in the New York Times asserted that Hemphill—who had by that point made thirty-eight trips around the world, or so he claimed—was the group’s most traveled member.

The Times reported, “Even in today’s jet age, the club has had trouble soaring over the 300 member mark.” In order to boost membership, TCC began to welcome anyone who had been to a hundred places, rather than a hundred countries, on what was then a list of 263 destinations.

No one knows for sure how many travelers have visited every UN country but country collectors believe the figure is somewhere near two hundred.

The Counting Countries podcast intro asserts that there are more people who have traveled to outer space than have made it to all 193 countries.

The Guinness Book of World Records recognized John Clouse in 1995 as the world’s most traveled man. Ten years later, Charles Veley founded MTP after approaching Guinness in the hopes of laying claim to the most traveled title.

Veley is a pioneering figure in the world of country collecting and his life story is a great one. He went to Harvard on an ROTC scholarship but was dismissed from the air force due to a vision problem. He went on to found a tech company that went public.

“It Wasn’t That Enjoyable”

In a 2019 interview on the Counting Countries podcast, Veley was candid in looking back at his frenetic travels, in which he took more than three hundred flights in some years.

“It wasn’t really enjoyable travel at all,” he said. “It was a lot of flights and not much sightseeing. Today I’d say it was superficial travel. It wasn’t worth it.”

Veley founded MTP because he felt he could improve on the TCC list and unlike TCC he established traveler rankings. Veley’s 874-place club gave extreme travelers new goals and ways to measure themselves against each other.

In 2011, Harry Mitsidis, a Greek-British nomad, founded TBT (which he later renamed NomadMania), an online club with a 1,281-place list that rewards (ranked) travelers who have visited every region of every country.

The Spaniard dropped out of school at fourteen and has made his way in life, traveling around the world while intermittently working as a waiter, a dishwasher, a driver, and many other odd jobs.

Sánchez has visited every sovereign nation, plus every region in every major country, and scores of obscure islands, like Tristan da Cunha—an impossibly isolated locale that is reached only via a twenty-day round-trip boat journey from South Africa.

He has visited 1163 of 1281 places on TBT’s travel to-do list. Almost all the places missing from his travel resume are hard-to-get-to islands that few aside from frenzied travel zealots have heard of.

They include geographic oddities like Franz Josef Land, a group of 191 frigid, uninhabited islands near the North Pole; Marie Byrd Land, a chunk of West Antarctica so remote that no nation has even claimed it; and Juan de Nova Island, a 1.7-square-mile tropical island between Mozambique and Madagascar.

For obsessive club travelers, one’s travel resume can be quantified based on the number of countries, territories, autonomous regions, enclaves, geographically separated island groups, and major states and provinces they have visited.

Extreme travelers want to go “everywhere,” but they do not agree on what that term means.

The very top travelers have virtually nothing but dangerous or off-limits places left to visit. Hitting these spots often requires both luck and ingenuity.

Bob Bonifas, a Chicago native who is the CEO of an alarm company, found a way to visit Guantanamo because he knew someone who knew someone who was stationed there and could give him the required official invite.

For his part, Jorge Sánchez says he won’t complete any of the TCC, MTP, or TBT destination lists because he thinks it’s immoral to spend a large sum of money to visit uninhabited islands where he feels there is nothing to learn.

At one point, his profile on the MTP site accused other “narcissistic” club members of “shamelessly” exaggerating their travel numbers to inflate their egos. Such drama can be part of this subculture.

A Small Club of Elite Travelers

Most of the world’s elite travelers know each other.

They cross paths online and in remote places like Grozny, Chechnya, Mogadishu, Somalia, and Liberland (a micro-nation in the Danube), and Baghdad and Iraq, where they convened for World Extreme Travel Conferences in 2014, 2016, 2017, and 2018.

And they often pool resources to charter boats to islands with no ferry services. But it is competitive.

Frank Wigand Grosse-Oetringhaus, a retired Siemens executive who was on the 2015 Bouvet trip, has taken the club rankings to another level by creating a master ranking of travelers using their respective ranks in nine different clubs.

According to his calculations, which he says are focused on quality travel, he is the world’s best-traveled person.

Grosse-Oetringhaus, now in his late seventies, retired in 2006 and began to travel “systematically.” He resolved to visit every country in the world and came up with a list of five thousand world highlights that he set out to see in a decade.

Traveling with his partner, Murallon Teo, a Filipino physician, they lived nomadically for more than ten years. They completed their country-collecting quest and visited about 4,700 of the 5,000 highlights on their list by 2016.

Grosse-Oetringhaus details why he believes he’s the best traveled person in the world on his web page. In one post, he poses the question, “If you claim to be #1[,] are you a narcissist?”

He continues: For athletes, it is normal to go for the No. 1. For traveling it is unusual. But if traveling becomes an essential part of your life it is understandable. It is fulfilling to measure your achievements.

The problem starts if you state: “I am the best”—the danger of becoming a narcissist, an extremely egocentric person who lives in his own world. But if you try to be objective and ground your claim on widely acknowledged criteria you are not a narcissist, you like competition and you measure achievements. Nothing is wrong with that.”

The notion of travel as a competitive sport may seem peculiar to some, perhaps an example of wanderlust gone wild.

The competition is an intense version of something most travelers want to do: share their travel experiences.

Look at Where I’ve Been!

Are they motivated by the validation, the status, and the bragging rights that these organizations confer—or by some nobler impulse?

When I first heard about the world of country collecting, I suspected that these obsessed voyagers were tick-the-box types who breezed in and out of countries without learning much.

But after getting to know many country collectors, I realized that I had grossly underestimated most of them.

The travel lists compel them to visit and learn about places that they would otherwise never know about. For them, the world is like a puzzle, waiting to be solved one piece at a time.

The instinct to condemn country collectors stems at least in part from a traveler’s impulse to justify what is, let’s face it, a mostly indulgent preoccupation. But none of us have time to see everything.

Travelers who dive deep into a handful of countries are no better than those who get a taste of all of them. Travel snobs who want to look down their noses at country collectors should heed an important maxim: there is no wrong way to indulge wanderlust.

Dave Seminara is a writer and former diplomat based in St. Petersburg, Florida. He is the author of four books. Dave grew up in Buffalo and was a member of the U.S. Foreign Service before he became a writer. He served in Macedonia, Trinidad, Hungary, and in the Bureau of African Affairs in Washington, D.C.

Buy this book: Mad Travelers: A Tale of Wanderlust, Greed and the Quest to Reach the Ends of the Earth