Hands down, my favorite drive in Montana is the Beartooth Highway.

It’s 68 miles of jaw-dropping scenery, starting in southwest Montana, dipping into northwest Wyoming, then back into Montana. It ends at the east entrance to Yellowstone National Park.

Always in view is the rugged Absaroka-Beartooth Wilderness, home to 20 peaks that reach over 12,000 feet.

The drive can literally take your breath away, both with the never-ending views of an unspoiled landscape, along with an altitude of 10,947 feet at its highest point, causing breathing to be a challenge for flatlanders.

The highway, designated a National Scenic Byways All-American Road, is nothing short of an engineering marvel.

The route was surveyed in 1927, with construction starting in 1931 and finished in 1936.  Anchoring the drive at either end are the mountain towns of Red Lodge and Cooke City.

The drive is seasonal – it opens around Memorial Day (dependent on snow removal) and closes in late September.

The weather can change on a dime and temporarily shut down the Beartooth Highway, so check with the National Weather Service before you hit the road.

Traveling the Beartooth is not a pedal to the metal adventure. Instead, it’s a slow savor of an incredible part of the world, so best to allow plenty of time to enjoy.

For me, that equates to at least three hours, with all the stops I make for photos. Riding shotgun are granola and candy bars, Gatorade, and water.

There are no places to eat on this drive, although you can pick up snacks at the Top of the World Resort.

The start for this drive is the lively mountain town of Red Lodge, with its main street brimming with antique and home décor stores, art galleries, eateries, the old-fashioned Montana Candy Emporium, and Red Lodge Ales Brewing Company, a local favorite for both the brews and food. 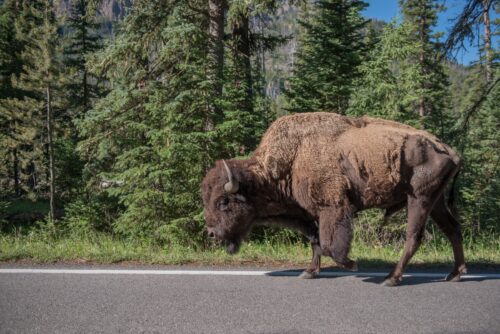 Not to be missed is the Red Lodge Clay Center, with its showroom of cutting-edge ceramic art.

I like to bunk down in the center of town at the historical Pollard Hotel, where the likes of Calamity Jane, Buffalo Bill Cody, and Liver Eatin’ Johnson made their presence known.

During the warm season, the Beartooth Highway is popular with bikers, so you’ll see a fair share of Harleys parked in Red Lodge.

If you want to rub shoulders with this crowd, head to the Snow Creek Saloon and be sure to check out their wall of license plates.

If your visit to Red Lodge falls on a Thursday to Sunday, check out the pig races at Bear Creek Saloon and Steakhouse, a 10-minute drive from Red Lodge.

Bet on your favorite little squealer. Should your pig win, you get to keep half of the jackpot, with the remaining money going towards scholarships for local kids.

This fundraiser has been going strong for over 25 years.

Once you leave Red Lodge and head up the Beartooth (Hwy 212), you climb up the highway through a series of switchbacks.

The first sizable pullout and restroom facility is the Rock Creek Vista Point, with an elevation of 9,190 feet.

It’s a short walk out to an overlook, where you’ll get a sense of just how powerful Montana’s landscape is, from the valley floor up and across to the spectacular Hell Roaring Plateau, part of the Absaroka-Beartooth Wilderness.

Roughly 30 miles from Red Lodge, you’ll see a sign marking the 45th Parallel, the halfway mark between the North Pole and the equator.

At this point, you’re now on the Wyoming side of the highway. Just past this marker, you’ll catch glimpses of Twin Lakes on the right side, two cerulean beauties tucked into the bottom of a rocky valley.

A short distance past the Twin Lakes is one of the oldest ski training areas in the US – the Beartooth Basin Summer Ski Area. It’s operated by The International Ski and Snowboard Camp.

The ski area was started by three Austrians in 1962, looking for a spot to train for the Olympics.

Depending on snowfall, it’s generally open from late May to early July.

With nearly 1,000 vertical feet and two poma lifts, this mountain isn’t for the faint of heart.

As their website states, “Be advised our ski area is for intermediate-advanced riders only.

Novice riders will find the steep terrain and platter lifts to be difficult and intimidating.”

If you’re lucky, you may catch a glimpse of skiers, although I’ve never seen anyone in action.

At the West Summit pullout, look for the “bear’s tooth,” a jagged peak to the north for which the highway was named.

The Crow Indians, also known as the Apsaalooke, inhabited much of this area over 600 years ago. From Apsaalooke comes the derivative Absaroka, thus forming the origins for the name of Absaroka-Beartooth Wilderness.

Along the highway, you’ll find 13 National Forest campgrounds. Besides drinking in the views, the area is a hotbed for hiking, fishing, camping, photography, wildlife watching, and chillaxing.

The road gradually winds down from its highest point through flower-infused alpine tundra meadows. Mountain lakes and waterfalls are in abundance.

Top of the World Resort

The only commercial venture on the Beartooth Highway is the Top of the World Resort – with a little bit of this and that in the small store, including souvenirs, snack foods, fishing and camping gear, cold beverages, liquor, and gas.

Camping is available, as well as canoe and paddleboard rentals.  There is a small motel on-site but no restaurant. It’s a must-stop, if only for bragging rights to say you’ve been to the Top of the World (store that is)!

A popular detour along the highway is the three-mile gravel drive up to Clay Butte Fire Lookout Tower, now serving as a Visitor Center.

Picnic tables and bathrooms are available at the Tower. A bit further, the Chief Joseph Scenic Highway (Wyoming 296), coming in from Cody, intersects with the Beartooth Highway.

As you get closer to Cooke City, Pilot and Index Peaks appear on the east side of the road as they rise majestically out of Wyoming’s Absaroka Range.

These peaks served as historical markers for early day pioneers, miners, and explorers.

Cooke City, and its tiny neighbor of Silver Gate, owe their beginnings to the discovery of gold in the late 1800s.

If I ever find myself in the witness relocation program, I will ask to be placed in this mountain town. Tucked back into a cabin, I’m sure no one would look for me there.

The summer population of touristy Cooke City swells to a whopping 300. That number drops to around 100 during the long winter months, when there is only one road into town through Yellowstone Park.

When spending the night in Cooke City, I opt for the Super 8, but there are a few vintage motels for lodging.

Next to the Super 8 is Bearclaw Bob’s and the Bearclaw Bakery, the place to go for a delicious breakfast, baked goodies, box lunches, and ATV rentals for exploring the spider web of dirt roads around the town.

Not to be missed is the Cooke City General Store, built in 1886 and listed on the National Register of Historic Places.

Its creaky floor is filled to the ceiling with everything you could possibly need or want from fishing supplies, souvenirs, groceries, and clothing. They even sell penny candy!

End of the Drive

From Cooke City, it’s six miles further to the east entrance of Yellowstone Park, our nation’s oldest national park. You’ll pass through the settlement of Silver Gate with a handful of cabin rentals.

Be on the lookout for bison that like to take a stroll out of their home in the park.

If continuing into Yellowstone, you’ll pay the park fee at the log entrance station ($35 per vehicle, good for seven days).  Be sure to ask the attendant for a park map.

Advice from a Local

I’ve learned over the years that it can be very chilly on the Beartooth Highway, even in the middle of summer, so I always pack a warm jacket, hat, and gloves.

This scenic byway is home to both grizzly and black bears.  If you plan on backcountry hiking, be sure and take bear spray with you and keep it handy (not in the bottom of a backpack).

Encounters with bears are rare, but it’s best to be prepared. With travel in the US at an all-time high, make sure you have room reservations before heading out anywhere in Montana.

Hit the road with a full tank of gas and patience to savor slow travel!