Once, Lake Tahoe was the capital of kitsch. Visitors were welcomed by an army of flashing, dinging one-armed bandits.

Neon signs of glowed defiantly among the pine trees, announcing stages full of dancing girls and hidden chapels ready for the impromptu wedding.

But there is a move afoot to appeal to a younger, hipper audience in Tahoe, situated on the California and Nevada borders, and home to the United States’ second deepest, and arguably cleanest, lake.

In both South Lake, famous for its opulent resorts and casinos, and North Lake, a hidden gem of the Sierra Nevadas, a vibrant alternative travel culture has been cultivated, with countless options for recreation and entertainment.

There is still a bit of glitz, but it’s quickly taking on the guise of retro-chic, and the quieter Tahoe – its environmental, bohemian side – is attracting a new breed of adventure-seekers to its shores, blending more seamlessly with its bright lights and wild nights.

The exploration begins on the road from the Reno/Tahoe International Airport, which is long and winding, affording a spectacular view of the Nevada plains and the mountains ahead. As Lake Tahoe approaches, the flatlands give way to the hills and the water, illuminated at night by the soft porch lights of many ski lodges and summer cottages.

As the heart of South Lake nears, however, those subdued lights give way to the more vibrant colors on the casinos, hotels, and marquees announcing concerts and shows.

Rising from the center of the spectacle is the Mont-Bleu in Stateline, Nevada. Formerly Caesar’s, the high-rise hotel, casino, and entertainment venue was redesigned with an updated look and a suite of amenities for the twenty-something crowd.

Slots and Card Tables, of Course

It has the ubiquitous slot machines and card tables of most of South Lakes’ nightspots (as well as a cozy little wedding chapel). But it also boasts a trendy ‘center bar,’ the HQ, a cylindrical seating area with a circular bar, and a flaming hibachi in its center.

Adjacent to the HQ is blu, a late-night dance club with DJs, cabana seating, and bottle service, and Opal, a hookah bar in keeping with the newest trend within the college set, allowing patrons to puff on a long, winding hookah pipe in between designer martinis on the dance floor.

The hotel is also only moments away from Heavenly, one of the area’s largest ski resorts, which straddles the California-Nevada state line and offers spectacular skiing and views from its comfortable gondolas.

For those looking for an extra thrill, the Heavenly Angels are party girls who regularly host dance- and drink-fuelled events in South Lake’s clubs and casinos.

However, a trip to North Lake, including a jaunt to Diamond Peak ski resort in Incline Village, Nevada, might satisfy those looking for something off the beaten slopes.

The annual Dummy Downhill at Diamond Peak, for example, is proof that even while enjoying one of the region’s most common past-times, there is always something unusual to see.

The Dummy Downhill calls on the talents of the public and the mountain’s staff, from ski patrol to Ski Wee, to create launchable, skiing dummies that can be pushed down the mountain and sent careening over a massive jump.

The event entertains skiers late in the season, incorporating live music, an outdoor BBQ, and prime seating on Diamond Peak’s deck for the main event.

Everything from an angry Pillsbury Snowboy to a six-foot skeleton dubbed ‘What Tree?’ could glide over the formidable mogul. Sometimes, the dummies land with success, and other times with crushing, hilarious consequences.

But the event is part of a family-friendly atmosphere at Diamond Peak that nevertheless allows for some mid-day merriment after a few runs down the mountain, which, smaller than Heavenly, offers similarly fantastic views but less-crowded trails.

Traveling down the North Lakeshore, it’s evident that a quieter pace is the norm, but even some of ‘old Tahoe’ is experiencing an overhaul of sorts. A mix of innovative attractions and accommodations are joining vestiges of the old-Hollywood past, such as the Cal Neva casino and resort, a favorite venue of the Rat Pack in their heyday that was owned by Frank Sinatra and has been closed since 2013. It’s owned by billionaire Larry Ellison, who bought it out of bankruptcy.

Not far from Cal Neva is Thunderbird Lodge, another pit-stop for Frank, Deano, Sammy, and Peter (or so we’ve been told). The lodge only recently opened to the public in 2003, and its mix of a strange history with new, eclectic events and a reputation for the paranormal has given the landmark a new life.

The large, stone-walled mansion is set away from all main roads and sits directly on the rocky shores of the lake. It was constructed largely by Native Americans who put their own touches on the estate, adding carvings of ‘spirit animals,’ for instance, on its many buildings.

But the real personality of Thunderbird Lodge came from its original owner, George Whittell Jr., a San Francisco heir to a fortune earned by his family during the Gold Rush.

Whittell was a bona fide playboy and used his inheritance to fund a life of leisure and a long list of quirky obsessions. He ran away with the circus to work with animals at 16 and later moved to Nevada to avoid California taxes, where he acquired 40,000 acres of land in Lake Tahoe from a lumber company devastated by the stock market crash.

Soon, he’d devised a plan for a sprawling summer retreat.

Whittell indulged his love for wild animals at the estate, keeping elephants, cheetahs, and what would become his closest companion, a lion named Bill that he raised from a cub.

Thunderbird Lodge is known as a beautiful yet eerie curiosity for other reasons, too. Below its traditional living quarters, Whittell built elaborate passageways, long suspected to host supernatural events, and proven to lead to secret rooms and entrances.

A faux wall behind a shower stall leads to a game room, often visited by celebrities (and showgirls) who watched from Cal-Neva for a special signal from the lodge’s own lighthouse.

Now owned by the Thunderbird Lodge Preservation Society, the mansion has been rehabbed and expanded to accommodate tours and events such as upscale wine dinners.

However, its long walkway to the water, dubbed The Serpent due to a set of fangs carved from the rock at water’s edge, still gives guests the shivers, and Whittell’s personal yacht also named the Thunderbird, still creates spine-tingling moans and groans as it rocks gently in the boathouse, available nonetheless for private charters. It costs a mere $500o donation to the charity to take a spin!

Leisure Under a Living Roof

In his own way, Whittell was responsible in part for the emphasis on green living in Tahoe. His property once spanned 27 miles of the lake’s shore and was therefore preserved from casinos and other development so Whittell could keep the area to himself as his own personal playground.

Indeed, North Lake in particular is known not only for its natural beauty but also for the environmental consciousness of the people who live and work there.

An apt example of this forward-thinking attitude is the Cedar House Sport Hotel owned by Jeff and Patty Baird, a perfect blending of conscientious green building and sleek, European styling.

The Cedar House boasts a full bar situated within a lobby and sitting area that was built using cedar harvested from a reforestation project, much like most of the hotel. Most notably, though, is its living roof, which insulates the building and even offers fresh strawberries and herbs from summer plantings.

Guests can also enjoy modern amenities such as Wi-Fi in their rooms, private decks, and Continental breakfast in the morning, which elevates the Cedar House from merely an architectural marvel to an upscale, contemporary hotel.

The Cedar House has 42 rooms, and its size adds to an intimate experience. However, more exciting all-season activities aren’t hard to track in North Lake, ranging from the invigorating to the intriguing, and always maintaining respect for the natural surroundings.

Its largest mountain resort, Northstar at Tahoe in Truckee, California, boasts an extensive array of outdoor activities for all seasons, and a slew of special events to keep things interesting.

In the winter months, outdoor adventurers can ski, snowboard, tube, or snowshoe at the resort, carried to various points North by gondolas. In the evenings, the traditional winter sports are kicked up a notch, pairing cross-country ski tours with wine tastings, for example, or moonlight dog-sled trips.

In The Village at Northstar, an expansive dining, shopping, entertainment, and vacation-living area, fire pits keep more casual travelers warm as they sip a hot toddy and take in live music, and several chic shopping and dining spots create a bustling marketplace.

These include Shoe, one of two locations (the other is in Reno) owned by Serena Robb, which carries designer shoes, handbags, jewelry, and clothing, and Gloss, a runway-inspired boutique for men and women.

In the spring and summer, Northstar accommodates hikers, mountain bikers, golfers, horseback riders, and fly-fishers among other enthusiasts, and maintains that something-for-everyone slant by peppering the season with unique activities such as star tours complete with telescopes, trivia, and prizes; guitar workshops; street fairs, and food, wine, and beer festivals.

But at the base of the mountains, Northstar’s hometown of Truckee is one that has reinvigorated itself on the whole, with a fresh, hipster image.

The town was once a quiet railroad stop with little more to boast than a five and dime store and a trading post. In recent years, however, the town has begun to reinvent itself as a funky art and shopping destination.

Truckee has maintained its Gold Rush feel, but today the storefronts don’t advertise picks and shovels, but instead designer threads and upscale gifts.

Restaurants range from sushi to Mexican to American fusion, and the bars are stocked with rows and rows of fine wines, in keeping with the region’s growing wine culture.

But the glittering shows and the shuffling of cards is not far off; nor is the thrill of the mountains, the ambiance of fine dining, or even a brush with all things strange at a millionaire’s castle on the water.

There’s a rebirth underway in Tahoe, steeped in history, seasoned with spice, and, yes, in parts still deep-fried in kitsch.

But still, the tastes of Tahoe are overwhelmingly delicious, from the dance hall to the dusty trail. 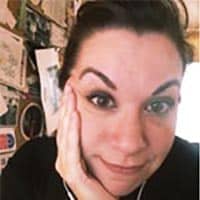 Jaclyn C. Stevenson is a communications director for a community college in NY state, near her Massachusetts home. She specializes in travel, business, culture, and the arts, and comes from a long line of adventure-seekers.  Find her on Twitter @writerjax

Love California? Get our California Plane Reader with dozens of stories for your Kindle, iPad or Nook.