The Drunken Tourist in the Dismal Red Light District

From Los Angeles to Prague, throughout Europe and New York, with a bottle in one hand and The Urantia Book in the other, The Drunken Tourist continues to translate a really good bender into the convoluted cause of uniting the Church with the Pub.

So really, what kind of book is this? In what genre does it fit? Is it a budget travel guide?

A spiritual pilgrimage? An exposé on mental health and recovery?  A sex, drugs, and rock & roll adventure story originally written in the Psych Ward of L.A. County Jail by an arguably diagnosed Bipolar Alcoholic? Yes.

Excerpt from the Book: Amsterdam

From the minute I stepped off the train I knew Amsterdam was a circus. It looked all dressed up like a pretty little whore with no underwear on. Centraal Station was truly the central station for everybody to splay themselves out all over the pavement.

Longhairs with backpacks everywhere. Indians and Africans selling, “you-name-it, we-got-it.” Youngsters bumming change with no shame. A teenage Deadhead and her puppy asking for money for dog food. There was even the guy with the monkey and the cart playing the wind-up song.

The line at the tourist information booth was half a mile long and to pick up a map would be ridiculous. Everybody spoke English anyway, so why not just walk in the direction everybody else was walking?

By the time I negotiated the three-minute walk to Dam Square, I was approached at least ten times by someone selling some kind of drug or some kind of phone card. This town made New York City look like Orange County on a Sunday morning. Even the metal cones separating the sidewalks from the streets were shaped like slick dicks with ribbed condoms on.

From the square, I was directed to walk down the Zeedijk to look for a hostel. There was bar after bar along the crowded narrow street I chose on my quest to ditch my luggage.

Then one coffee house after another, a sex shop, another coffee house, and then there she was — my first look at a hooker in a window in the city’s Red Light District.

This woman was gigantic, Asian, and unashamed. She was sitting on a tall chair turned around like your teacher used to do during those heart to hearts before the whip came down. Her red bikini was almost completely enveloped in rolls of flesh flapping freely.

Her thighs were enormous, while calves, ankles, and feet were as one, with toes of bright red, twitching in anticipation.

The smile she flashed was actually quite nice and she had almost all her teeth. The other men looking at her kidded each other to go in. I don’t know why, but the whole scene made me want to run to the nearest Catholic Church.

With no church in sight, I found a place that looked cheap enough and ordered a beer. 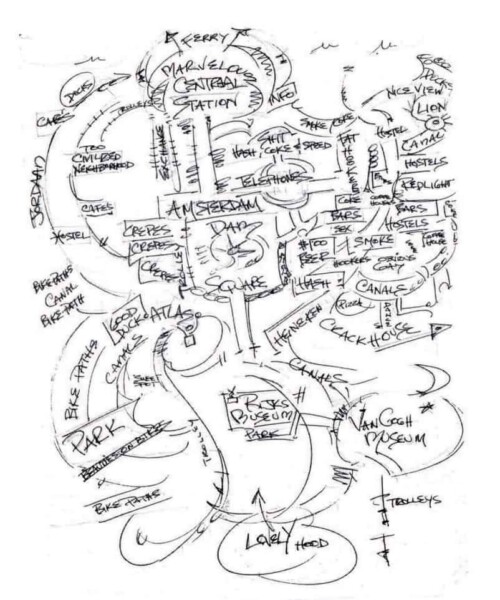 The bartender served me one, along with a menu featuring pictures of different buds of exotic marijuana alongside grams of hashish, each with a price that had been changed often.

On the bar was a pie tray with “space cake” sold in slices baked with hash or reefer.

I asked two pairs of fellows at the tables if they could recommend a hostel nearby. Good luck. No one was responding except to the bathroom.

But what really got me was that no one was smiling. You figure that everybody would be having this outrageously extroverted good time but it wasn’t like that at all.

Most everyone was paired up or in little groups keeping to themselves and concentrating on the whole smoking procedure. I got fortified with another brew and moved on, looking for a place and a smile on the street.

Yet the neighborhood countenance was grim, despite all the flashy signs and window dressing. The 1.5 Second Road Rule was being violated with relish. But who knows, maybe the exchange of a smile around here would infer the exchange of sex or something.

I eventually found a bed at Amsterdam’s BullDog Hostel, right in the middle of the Red Light district. The room I checked into had only one window with maybe 20 bunk beds in two rows on each side of the room, filled with young men cocooning for their ensuing smoke fest later that evening. It was depressing. I didn’t have a padlock for my assigned locker so I begged the front desk guy to keep my bag locked up in the office. There was a sign at the desk reading, “Midget Hookers/Half Price.”

Morning found me alive and well. Downright perky, considering. Over the fence were two middle-aged artists setting up their paintings for sale against the railing on the sidewalk. Down the way a sweet-looking young lady was maneuvering her hot dog cart into position for the day.

Smiling faces were zipping by on bicycles built for two. The streets were spotless and the townhouse gardens were in summer bloom. I must have woken up in a different city… The trolley back towards the center displayed a serene city.

Cafes were packed with business people drinking Heinekens while kids on bicycles kept up with the train. We passed rows of old brick townhouses with well-kept gardens that made up perfect blocks as I entertained the notion of how sweet it would be to live here with my lover. The trolley pulled up to the entrance of a beautifully manicured park. Fifty yards in, I found a spot on the grass and nodded off in the sun. 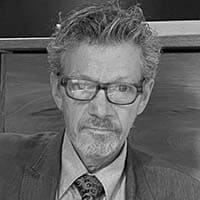 Chris Santana is a journalist, musician, and certified hypnotherapist who lives in New York City. He has been a member of The Self-Realization Fellowship and The Urantia Book Fellowship for over 30 years. He works at zoomhypnosis.org, a not-for-profit, spiritually centered hypnotherapy practice. He is a grandfather to Maverick and Jackson Santana.