Just an hour and a half drive from the picture-postcard palm-fringed beaches on the Pacific coast of Los Angeles there is another ‘sea.’

Or rather, a misnamed polluted and receding lake, it’s ‘beaches’ filled with dying fish and birds and the shore lined with decrepit and decaying resorts and towns.

Just as the manicured streets and mansions of Beverly Hills lie a few miles from the Pacific Ocean, the surreal squatter city popularly known as Slab City lies a few miles south of the Salton Sea.

Most visitors to L.A. never venture far off the tourist traps of Hollywood, Beverly Hills, the beaches, and the numerous theme parks, but unknown to them, there is another California, in fact, another America just a short drive away.

Here there are no fake palm trees; no golf courses fed with water pumped from melting snow on mountains hundreds of miles away, no mansions; just real people down on their luck, living off the grid in the unforgiving and seemingly endless desert.

The Salton Sea which is in the southernmost part of California was created by a colossal engineering mistake more than a hundred years ago, which caused two years of flooding of this low-lying area known as the Salton Sink within the notorious San Andreas fault.

The sea had a short period of rapid growth and fame, with marinas and ‘beach resorts’ built along its shores in the 1950s by ambitious but ill-fated developers, while the US Navy conducted weapons tests at the southern end.

Polluted from the runoff from nearby areas and with no inflow or outflow of freshwater, the water in the lake is now more saline than the Pacific Ocean and the toxicity has killed off most of the fish and birds that used to thrive there at one time.

The resorts and towns have largely been abandoned and all that remain among the ruins are a few free-spirited people.

I have been living in L.A. since the ’80s and even though I have traveled extensively around the country and the world, I had never been down to this area just 100 miles away, until the end of November last year. 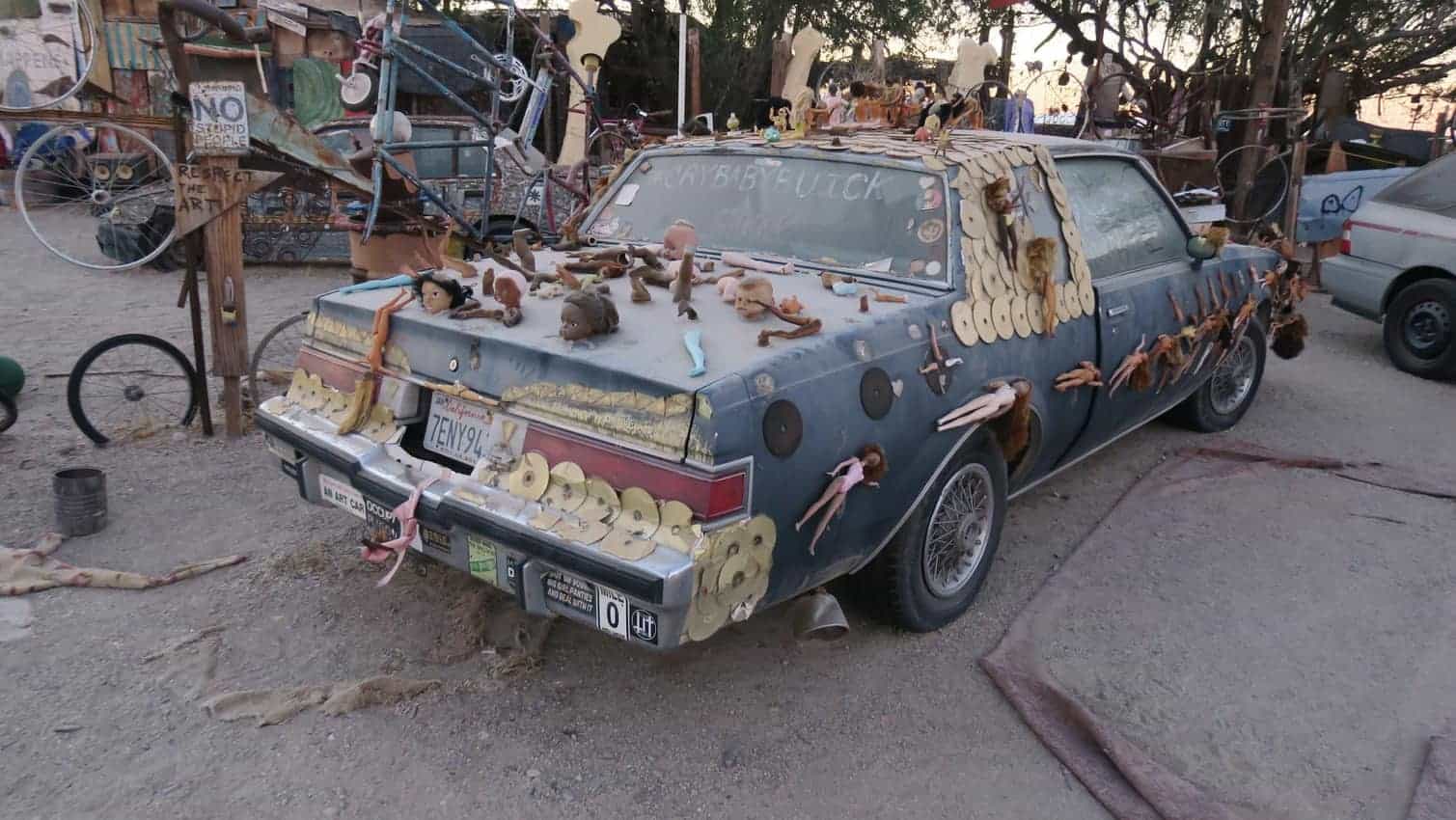 The pandemic having curtailed all my other travel plans, I was forced to rediscover places nearby. A few days after Thanksgiving, my wife, our dog, and I set out from our home starting early in the morning.

The east shore of the Salton Sea is just a 30-minute drive from the golf courses, resorts, and celebrity homes of Palm Springs. We drove east on the I-10 freeway from L.A. and took the State Highway 111 South from Indio.

From a distance the sea looks impressive, the dark water shimmering under the dazzling light blue sunny sky rimmed by barren mountains. In fact, from a distance, it did look like a sea with sandy beaches.

As the highway got closer to the shoreline, and we passed through the town of Mecca (oddly named so because the climate is similar to its more famous namesake pilgrimage town in Saudi Arabia), the stench from the fetid water hit us.

We decided to skip stopping at the deserted Visitors Center on the North Shore and continued south. We drove past the desolate town of Bombay Beach where even the large billboard of a woman in a bikini on water skis had faded. We did stop by later on our way back. We continued south till we reached the town of Niland. A short drive from there and we were on the outskirts of Slab City.

As we drove down Beal St, a single lane road, we could see the bright colorful Salvation Mountain, come into view on the right.

Created almost single-handedly by Leonard Knight, who passed away in 2014, his whimsical and visionary work is kept alive by a group of volunteers.

It’s impossible to describe this peculiar place in words. Just imagine what a creative child would build with mounds of colored playdough and you get the idea.  The words ‘God is Love’ are emblazoned across the top, just below a large cross.

There are many other religious quotes written across the structure, most alluding to Jesus. It took Knight over 30 years and several attempts to build the ‘hill’ out of adobe and straw using techniques perfected by local Native Americans over centuries.

The whole hill as well as the area in front of it is painted in garish colors and filled with discarded items salvaged from elsewhere and reused to create this unique artwork. We spent an hour walking around, talking to one of the friendly volunteers who was applying a fresh coat of paint on an area where it had faded a bit.

The artwork needs constant maintenance because of the harsh weather.  The museum inside was closed because of the pandemic, but one could easily spend hours looking at this unique oddity. I had been fascinated with this place ever since reading about it in John Krakauer’s bestselling book ‘Into the Wild’ about Chris McCandless, and Knight himself was actually featured in Sean Penn’s movie version, giving a short tour of his creation to Emile Hirsch and Kristen Stewart. 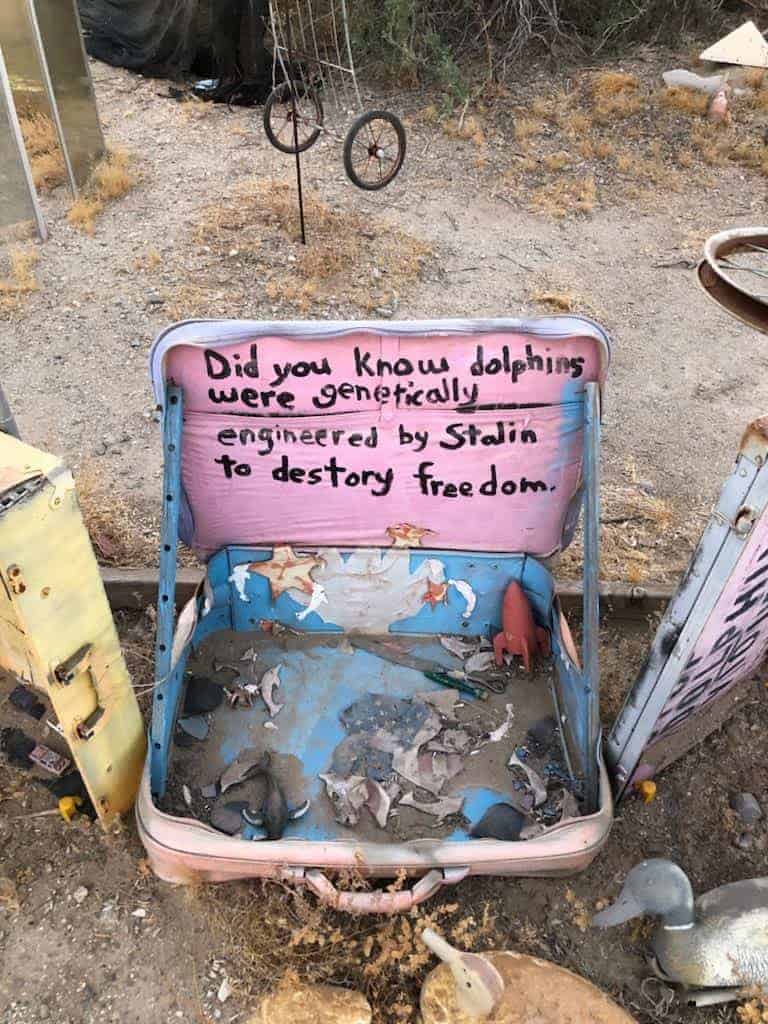 On to Slab City

We then drove further south along the road and reached Slab City, named after the slabs that are the only remains of a former Marine Corps training camp. Frequently called ‘The last free place in America’, it is the exact opposite of the California of tourist brochures.

A squatter colony of drifters and snowbirds living in dilapidated trailers, most of them have checked themselves out of the American dream. It looks more like a movie set for a Hollywood Sci-Fi movie set in a dystopian post-apocalyptic future than a real place.

Spread over 640 acres the city’s population dwindles in summer and surges in winter when it is estimated that more than 4000 people reside there.

There is no electricity, no gas, no running water, no sewage system, no stores,  but there is a library, a skate park in an abandoned swimming pool, a performing arts venue, and a fascinating museum named ‘East Jesus’.

Started by Charlie Russell, who left his tech job to work on Salvation Mountain, this free open-air museum is constantly evolving and changing. From a crashed small aircraft at the entrance to the gaudily painted junk cars, buried buses, and boats, and odd artworks inside, it is one of the most fascinating art galleries that I have ever seen. One can easily spend a couple of hours walking around this exceptional place.

By this time the sun was low on the horizon and the temperature was dropping fast and so we headed out, back to civilization and our mundane lives, leaving this fascinating world behind. We stopped at the former resort town of Bombay Beach as planned, and watched the sun set over the sea, painting the dreary, grimy town in bright shades of yellow, pink, and red.

For a few minutes the faded, crumbling town looked beautiful. The town now has a population of only a few dozen. A few pieces of wood lay scattered in the sand where the docks of the former marina used to be, while skeletons of abandoned yachts and boats overrun with graffiti dot the shore.

The beach is strewn with carcasses of dead fish and birds and the stench is unbearable. As soon as the sun went behind the distant mountains, all the colors vanished, as if a switch was flipped and the lights were all turned off.

The town was suddenly plunged into complete darkness within minutes and turned spooky and scary.  The streets were dark and empty; the houses that were still standing were dimly lit, vague shadows hung around corners. 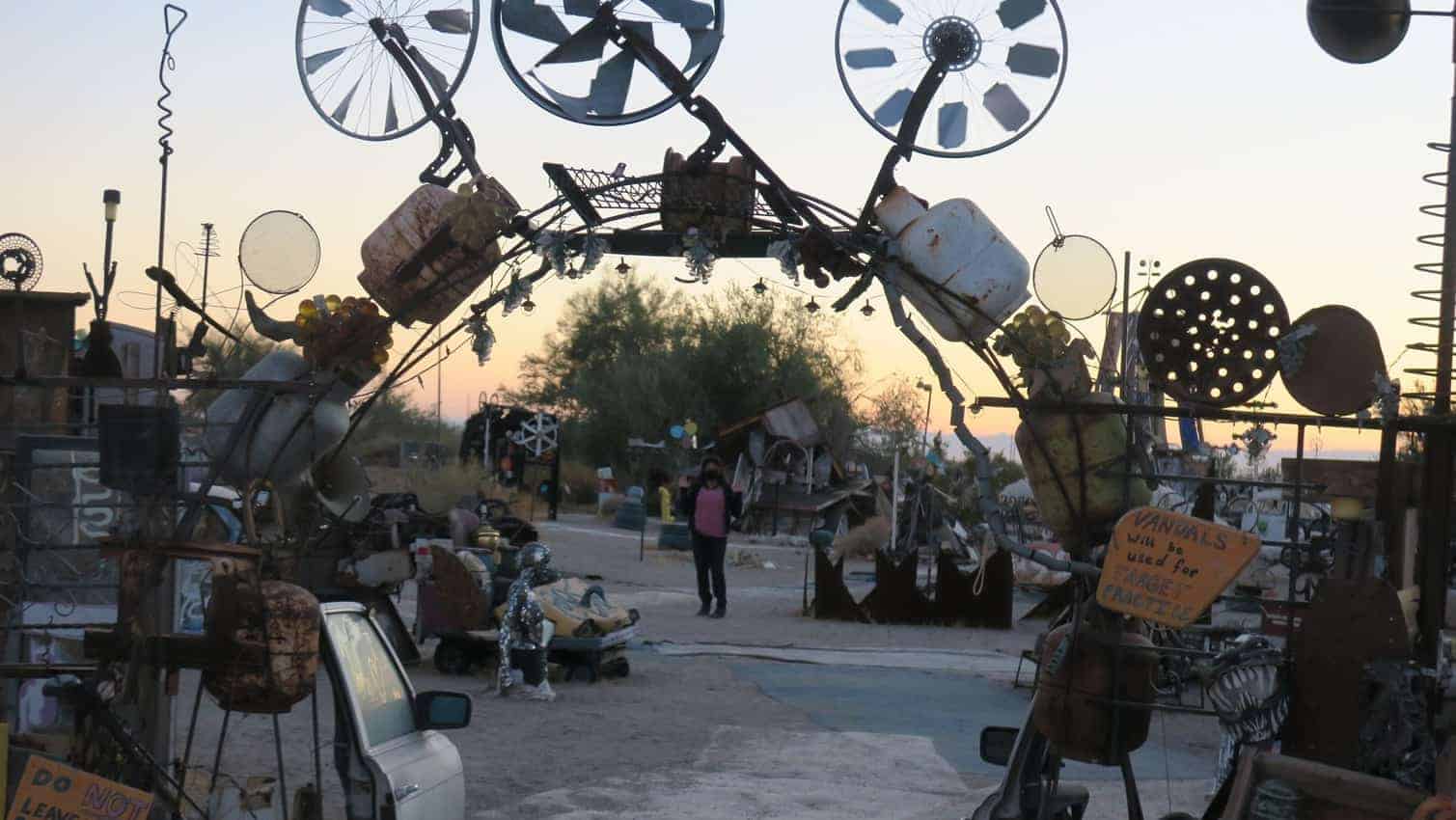 It felt like we were actors in a poorly scripted Hollywood B horror movie and were about to meet an untimely end.

As we walked down the empty street to the former drive-in movie theater which has been staged with old cars and is considered the town’s principal attraction, I found myself constantly turning to look behind, almost expecting to see a group of zombies chasing after us.

This is the kind of place where reason and rationality end and blend with the most bizarre dreams and nightmares. We left as quickly as we could and I turned out of town and onto the highway and gunned the engine of our car. Within minutes, I saw flashing lights behind us and was pulled over by a Border Patrol SUV.

It was not surprising as we were less than 50 miles from the southern border. A quick check of my driver’s license and we were off again. 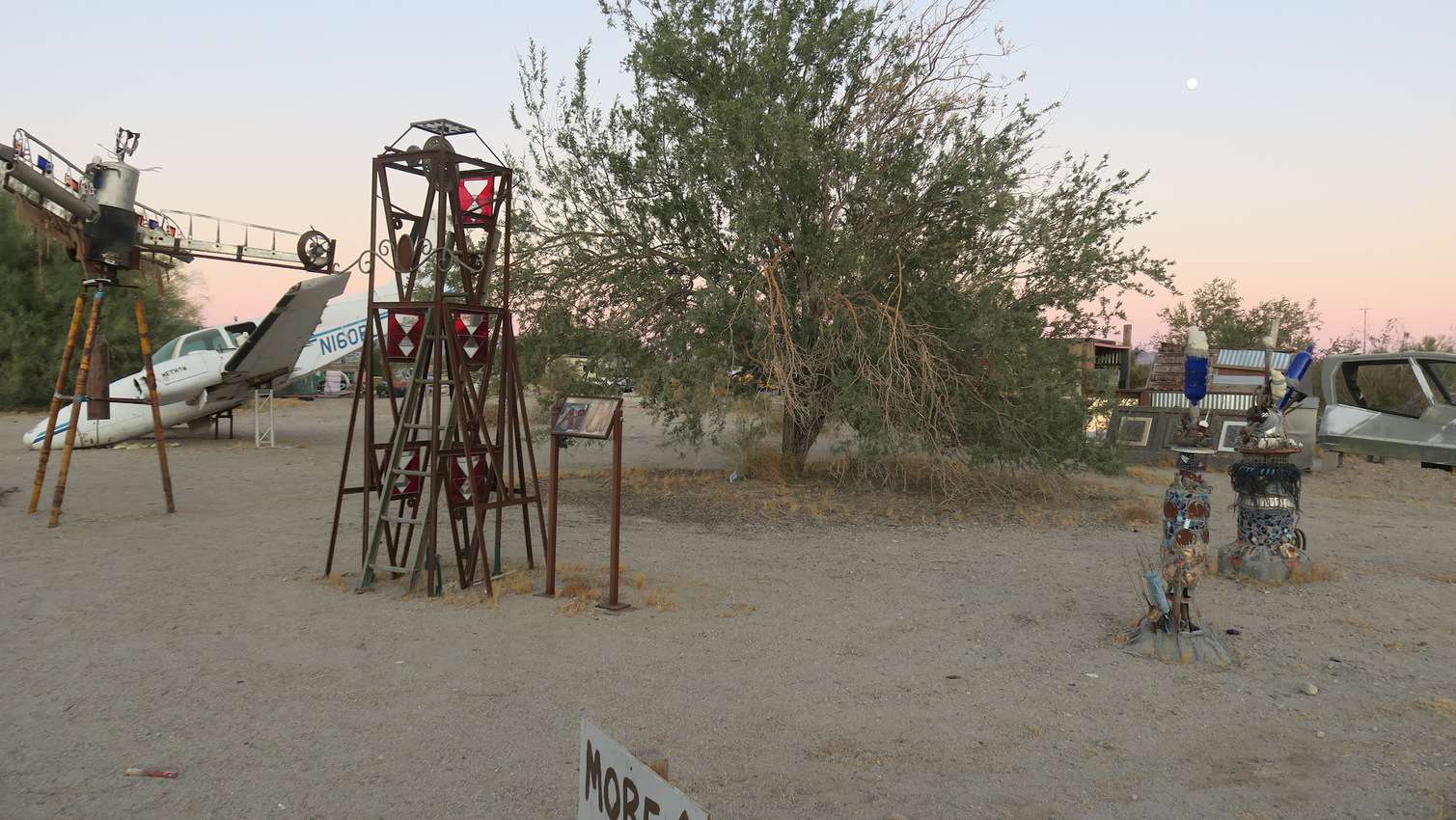 Thirty minutes later, we were in the center of Palm Springs, sipping wine with gourmet food at a fancy restaurant on tony Palm Canyon Drive, a world away from the magical, otherworldly, mysterious and eerie places we had left behind.

Scorching summer heat makes it almost impossible to visit this area except in the cooler months between October and April. If you want to avoid the long drive from L.A., plan to stay in the area around Palm Springs.

Joshua Tree National Park is a short drive from Palm Springs and a great place to hike, climb rocks and watch the night sky after dark. Anza Borrego State Park is another fascinating desert park nearby with wildflowers blooming in spring and the Galleta Meadows area in Borrego Springs nearby is another must-visit.

The desert here is dotted with over 130 large metal sculptures of all types, from dinosaurs to serpents to farmworkers and all created by one man Ricardo Breceda on land donated by philanthropist Dennis Avery. 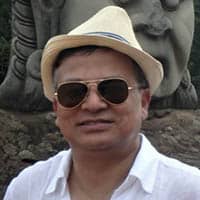 Soumitra Sarkar is a physician who would rather travel and cook. He lives in Long Beach, CA, and has traveled extensively. He runs a food blog at www.booeats.com, when he finds time.