The Lost Gold of Rome

The Magnificence of the Visigoths’ Roman Booty
(from Chapter 5: The Sack of Rome)

“What a gripping and dynamic read! As expected from the title, the fascinating saga of the barbarian king Alaric and his golden hoard occupies a central place in this book, butequally central is the epic story of the survival of late ancient-early medieval Rome.

Both these stories have surprising links to our time. Somewhere near Cosenza in Southern Italy there is a pile of unbelievable riches, hidden in the secret tomb of the Visigoth king Alaric, the first to break into Rome in 800 years. Will the modern archaeological methods and tools help discover this legendary treasure one day?” – D. Moore of Toronto in a review of “The Lost Gold of Rome” by Daniel Costa on Amazon.com 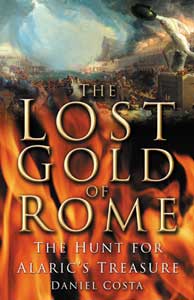 From the book… As Honorius wasted valuable time… the Visigoths carried out one of the greatest looting operations in the history of the world.

Even a partial list of the unbelievable gifts of Constantine the Great to the Basilica of St John in Lateran, as provided by the Book of Pontiffs, shows just how rich the Visigothic booty must have been:

-a 2,025lb silver fastigium (a sort of canopy) of hammered burnished silver with a vault of the finest gold;

-at the front of the fastigium, a 5ft, 120lb figure of the Saviour seated on a chair and 12 Apostles, each 5ft high and weighing 90lb with crowns of the finest silver;

-the apse vault of the basilica, of gold foil in both directions, 500lb;

-7 scyphi (drinking vessels or goblets) of the finest gold, 10lb each;

-a special scyphus of hard coral, adorned on all sides with prase (a light-green, translucent variety of chalcedony) and jacinth (an ancient gem believed to be amethyst or sapphire);

-40 smaller chalices of the finest gold, 1lb each.

The Book of Pontiffs provides evidence that the Visigoths looted the gold and silver furnishings of the Christian churches. Thus, it mentions that in the time of Pope Sixtus (Xystus) III (432–40), Emperor Valentinian replaced the heavy silver fastigium of the Lateran basilica that ‘had been removed by the barbarians’.

Earlier, Pope Celestine (422–32) is recorded as having endowed the Basilicas of Sts Peter and Paul with silver furnishings ‘after the Gothic conflagration’.

Of course, the Visigoths raided the neighboring Baptistery (Battistero), in which the porphyry Holy Font was covered inside and out with 3,003lb of finest silver. At its centre, there was a porphyry column supporting a golden basin containing a 52lb golden candle in which 200lb of balsam were burnt at Eastertide. A 30lb gold lamb, from which water poured, stood on the rim of the font between a 170lb, 5ft silver Saviour and a 100lb, 5ft silver St John the Baptist. There were seven, 80lb silver stags pouring water. Finally, there was a 15lb gold censer (a container for burning incense) encrusted with 42 prase and jacinth jewels. Such magnificent treasures were, undoubtedly, beyond the wildest dreams of any barbarian plunderer.

The fate of Constantine’s 150lb (68kg) gold cross at the tomb of St Peter in St Peter’s Basilica is still a mystery. Late in the nineteenth century, Lanciani noted that in the spring of 1594, while workers were flattening the pavement of the church on top of the Confession (the shrine of the tomb of St Peter), they also took away the base of Julius II’s (1503–13) ciborium (vessel containing the consecrated bread or sacred wafers for the Eucharist). 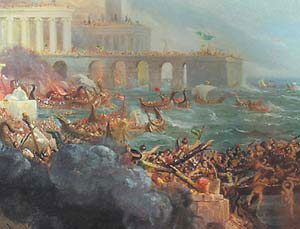 Detail from the cover.

At that point, the floor caved in and the architect and sculptor Giacomo della Porta was able to see in the hole the tomb of the Galilean fisherman and the gold cross of Constantine and Helena. These had last been seen during the papacy of Sergius II (844–7), which meant – no less and no more – that the cross had survived the sack of Alaric in 410, that of Gaiseric in 455 and all subsequent raids.

In a state of excitement, Giacomo della Porta brought Pope Clement VIII to the site. Cardinals Bellarmino, Antoniano and Sfrondato were also present. They were able to read on the golden cross the dedication with the names of the first Christian emperor and his mother. Very moved, Pope Clement VIII ordered the workers to seal the hole immediately.

In support of this story, Lanciani mentioned a written statement by Torrigio, the seventeenth-century author of the first guide to the sacred Vatican grottoes, describing the unexpected discovery. He also noted that the materials used to close the hole were still visible.

This was all very exciting, but the problem is that unfortunately excavations performed in the twentieth century found no trace of Constantine’s copper cube or his gold cross.

Did the barbarians really return the vessels of St Peter, as Orosius exultantly proclaims? And if they did, was it a complete or a partial restitution? Moreover, it is not entirely convincing that the barbarians, Christian or not, put aside their urge to loot and rape only to escort St Peter’s vessels on a lengthy trip through the city. What happened to St Paul’s treasure?

Already in the sixth century, Cassiodorus, as evidenced in his Variae, found it hard to believe that Alaric, a barbarian who plundered the churches inside the Aurelian Wall, would abstain from looting the completely defenceless churches of the apostles located without its perimeter.

(The Variae is a collection of letters and proclamations prepared by Cassiodorus between 506 and 538, while he was in the service of the Gothic rulers of Italy.)

Davis concluded that during the papacy of Celestine (422–32) ‘something was done also to compensate for losses at the basilicas of St. Peter and St. Paul.’

So it is not entirely certain that the Visigoths refrained from pillaging the basilicas of the Apostles, and Orosius’ account needs to be taken with a pinch of salt.

As the story of St Marcella illustrates, the barbarians tortured the citizens of Rome in the hope of making them reveal the location of their money or treasures. The runaway slaves probably led the plunderers to their former masters and helped find their hidden riches.

Discussing the fate of the fastigium of St John in the Lateran in the nineteenth century Gregorovius wrote, ‘For the latter had been carried off by the Goths, in spite of their respect for churches, and since this treasure alone weighed 511lb (according to the Book of Pontiffs the weight of the fastigium was 2,025lb), we may imagine how rich were the spoils which the barbarians must have collected from the other churches of Rome.’

The loot of the Visigoths has been described as, quite literally, ‘incredible’. The opulence of the Visigothic booty from Rome and Italy is attested to by the gifts which Galla Placidia received from Athaulf, Alaric’s successor, when he married her in January 414, in Narbonne, in what is now southern France.

Obviously, these gifts represented only a small fraction of the Visigothic loot from Rome and Italy. Basing his writing on Olympiodorus’ account, Gibbon mentions that Galla Placidia received from Athaulf fifty basins filled with gold coins, and fifty basins loaded with precious stones of incalculable worth.

The story goes that upon receiving these wedding gifts, the thought that they had formerly served to adorn the aristocratic ladies of Rome filled Galla Placidia with intense shame. Many treasures that were hidden only to be abandoned by the fleeing Romans remain lost forever. Stories of gold and jewels concealed in parks or houses persisted for a long time after the sack, but none were recovered.

The fall of Rome, the mother-city of the empire and its symbol of law and civilisation, traumatised not only many in the city itself but also numerous citizens in the provinces of the empire. In remote Jerusalem, St Jerome lamented: ‘My voice sticks in my throat, and, as I dictate, sobs choke my utterance. The city which had taken the whole world has itself been taken.’

The sack of Rome, the downfall of a city that had for long been considered the centre of the civilised world, was a powerful symbol of the end of antiquity and the beginning of the Middle Ages.

After three long days, in the manner of their third-century ancestors, Alaric and his people left Rome and marched on to Campania. The Visigoths did not leave occupying forces in Rome. They did not make changes to the local government, either. Although the damage caused by the barbarians was considerable, much of Rome remained intact.

Certainly, the barbarians had been busier looting and raping than destroying, and Rome was simply too big to be completely ruined in three days. But gorged on Roman treasure, the Gothic king entertained grand dreams of future conquest. He could not know just how little time remained to him to enjoy the gilded fruits of his martial labours.

Buy This Book From Amazon The Lost Gold of Rome: The Hunt for Alaric’s Treasure