Aboard the Airbus A380 Jet 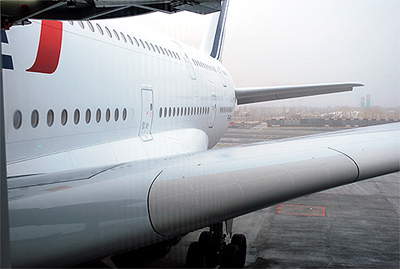 The massive A380 can be configured to seat 838 passengers! Photos by Sony Stark.

Airbus’ A380 Jet: Inside the Belly of the Biggest Bird in the World

On November 20, Air France began using the world’s largest passenger airliner, the Airbus A380. Air France is the first of all European carriers to finally put the ‘pride of Airbus’ on a transatlantic stretch between Charles de Gaulle and JFK.

And yours truly took a maiden voyage in it via a connecting flight to Tunis, Tunisia.

Along with my newest traveling companions, John and David, we played hide and go seek in the Super Jumbo soon after takeoff. The craft is big enough to get lost in.

It was the live external video camera mounted to the tail fin that clued us into the plane’s girth. Rather than peer out the window, I keep my eyes glued on the tarmac as we ascend. During taxiing, it feels like we might run out of runway but the wings finally throttled upward and the wheels leave the ground.

Thankfully personal comforts are not comprised due to the number of passengers onboard; rather there’s 50% more floor space than a 747. It feels… huge!

To my delight, there’s also an AC power outlet in every armrest between seats. No need for expensive airline adapters to draw juice from, because the power ports on the 380 are all 110V. Finally, passengers are able to type indefinitely on a laptop without fear of draining batteries or watching the entire length of a movie.

About 150 passengers relax in the upper double-decker spread including 80 in business class (also called the Affaires cabin) while the rest of us, including nine in First Class (also called La Premiere cabin), stretch out comfortably below.

I’m in Economy or the Voyageur cabin, four rows from the rear of the plane and one row from a screaming infant, but, hey, I’m lucky enough to be aboard a $400 million plane.

Ergonomic design lets this many passengers recline without invading anyone’s personal space and there’s enough knee and legroom so John and David do not need to wake me when they use the lavatories.

Colors are designed with passenger comfort in mind, and the luggage bins are thinner, taking up less space.

Before the drink cart is wheeled out, I dive straight into an endless entertainment selection: 100 movies, 180 TV shows, 700 CDs and over 20 radio channels, all watched from a 10.6-inch widescreen LCD screen.

It’s hard to pick so I opt to brush up on some foreign language learning programs, available in beginner and perfect for children.

Rather than use the mounted handset I touch the screen when prompted. You have the option to do both. There’s also a convenient USB connection for my flashdrive so I can download free PDF files of flight schedules, destination guides, relaxation videos and games.

Meals and service do not take longer as you might expect. An additional 540 flight attendants were trained to serve up a selection of vegetarian or meat dishes (that taste wonderful) with a choice of either available regardless if you’re sitting in the last row.

The flight is incredibly quiet but flushing bathrooms still keep me awake. I’m guessing that that is one inconvenience that engineers have yet to make a priority.

The most talked about addition is the open cocktail and fruit juice bars, six in total. The Voyageur section offers only non-alcoholic drinks, but it’s still nice to belly-up to a bar for a snack. The La Premiere and Affaires cabins offer free champagne in a specially created themed gallery dedicated to museum exhibits. This is a luxury I only read but I did not get a chance to peek into the lounge.

After a dinner, a movie and swapping out my contacts with glasses, I lean my seat way back, something I normally do not do on a traditional plane so I don’t inconvenience someone else’s comfort.

\But the shape of the seats allows me to cater to my own needs and it feels wonderful to fall asleep for more than a few minutes.