I’ve seen the kangaroos, I’ve tasted most of the local beers and I have visited at least a dozen beaches. My journey through Australia was going quite well so far.

Topping the drink and sun-drenched coast, though, was my trip to Coffs Harbour, New South Wales, to go whitewater rafting down the Nymboida River.

I had never put Australia and whitewater rafting in the same thought before, and I wasn’t sure it was even possible to do here. Well, I was wrong.

After a quick Google, I found a local company – Wildwater Adventures – that operates full-day, two-day and four-day whitewater rafting adventures. When I found out that they’re located just a half day’s drive from the Gold Coast where I was staying, I made a booking.

Coffs Harbour is a small beachside town that offers all the amenities to make it a great holiday destination for tourists, yet it has the atmosphere of a quaint town that makes it a perfect setting for an oil painting – complete with the old man fishing from the pier in the foreground and joggers in the background.

We stumbled upon the jetty strip and on Harbour Drive, or High Street, and found a nice selection of cafes and restaurants. Italian, Thai, Indian were all at our fingertips. A great dinner was what we were looking for, and that’s exactly what we got at Oberoi’s Indian Restaurant.

On Saturday, Wildwater Adventures picked up our group of four at 7:30 a.m. at our hotel. We were all wishing for another 30 minutes of sleep, but we were totally excited to go rafting. After stopping to pick up a few more people, including our rafting guides for the day – Rocky and Rob – the bus made its way into the Binderay National Park.

It was going to be about an hour’s drive until we reached our raft launching site and a nap would have been nice, but the scenery was too good to pass up.

As we drove through the parks and along the insanely winding road, Rocky, who is a Coffs Harbour local, filled us up with tidbits of local history (“Coffs Harbour thrived on a timber-logging industry“) and knowledge of the flora and fauna (“Those are banana plantations, which have been around since the early 1900s“).

The Sights and The Snake

Once we arrived at the mighty Nymboida River, our guides offered us a spread of coffee, tea and hot cross buns before sitting us down for a safety talk. Then, we figured out how to fasten our life vests, launched our raft and got our first feel for the refreshing (read: cold) water temperature.

Our guide, Rob, explained what we should do when he yelled, “back paddle,” “front paddle” and “get down!”

The first rapid was great, a teaser. The four of us were able to paddle through it with no problems, yet it definitely got our heart racing and our hair wet.

At the next rapid, we had to get out of the boat and walk along the riverbank as the water level wasn’t high enough for us to paddle through it. We were told that after a hard rain, this rapid is a grade 5. (Secretly, I was kind of glad to be walking around it.)

The Nymboida River was also incredibly calm at certain spots, which allowed us to soak in the amazing views. It was a fantastic day with blue skies dotted with white clouds and incredible views of the gorge. I was so glad I brought along my camera (there was a small waterproof box on the raft).

Rob also told us about some of the local wildlife – goannas, kangaroos, dingos, birds. In fact, when we stopped for afternoon tea a couple of hours into the rafting trip, we found a red-bellied black snake basking in the sun.

It’s one of the most common snakes in the area, but also one of the most venomous and dangerous. I wish I had known that before I was acting like the paparazzi trying to get a good picture of the snake.

All in a Day’s Work

We had been rafting for four to five hours, but I couldn’t believe it was over already. I was just getting the hang of back paddling, and I wanted more.

We paddled over to a campsite, and our bus driver was now doubling as cook. None of us felt hungry as we were still running on all the adrenalin of the grade 3 and 4 rapids, but as soon as we smelled the steaks on the fire, we felt differently.

Wildwater Adventures had steaks, salad, biscuits and drinks ready for us at the campsite, and it was the perfect meal to end the day.

Everyone in the group was rehashing the day’s adventure (“Who was the first one to fall in the water?“), checking out the pictures we took, and of course, planning our next whitewater rafting trip (“I definitely want to do the two-day next time!“). 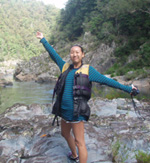 Cara Kellogg is a technical editor for a marketing firm who has been living in Australia for the past year.