Ijen Crater: A Trek to the Blue Flames

It’s dark. The terrain is rocky. The sulfuric smell of rotten eggs is in the air. Dust burns the eyes. Toxic clouds pass by and the nearby lake is so acidic, it can eat away metal.

Blue fire is the main reason people hike down into the Kawah Ijen active volcano crater in East Java, Indonesia, and they’ll trek through harsh conditions just to catch a glimpse.

Sulfuric gas ignites when it is released into the air, producing electric blue flames. The fire can be seen from a distance, but to get a close look, hikers need a gas mask as poisonous sulfur clouds blow by. But even with a gas mask on, a gust from a sulfur cloud can give a feeling of suffocation.

The crater’s blue flames are visible before sunrise. However, the flames aren’t very predictable.

Trekkers start their hike just a few hours after midnight. It needs to be dark to see the fire. As the sun begins to rise, many hikers are still at the heart of the crater. The surroundings become visible — the bright yellow sulfur mine, the gray rocks, and the sky, now pink over the turquoise blue acidic lake.

The volcano is still active. On May 29, a sulfur miner died after volcanic activity triggered a 3-meter wave in the acidic lake, the Jakarta Post in Indonesia reports.

The Ijen Crater is located inside an approximately 20-kilometer wide volcano caldera, according to the Smithsonian Institution Global Volcanism Program.

Much of the land inside the caldera is fertile, with many coffee plantations and waterfalls. However, the inside of the crater houses the most acidic lake in the world, the Smithsonian says.

For the TV series “Angry Planet,” adventurer Kournounis took a rubber raft out on the lake and measured the pH level. Based on the scale of 0-14 where the lower the number, the greater the acidity, the lake was 0.13 in the center, and 0.5 by the shore.

When he put an aluminum soda can into the acidic water near the shore, the can sizzled, and some of the outside metal was eaten away.

Sulfur has been mined at Ijen since 1968, National Geographic says. My guide said that his family were also miners. The miners hike down the crater, load up baskets full of an estimated 75 kilograms of sulfur rocks and hike back up the crater. He said the miners are paid 1,000 rupiahs for 1 kilogram. That’s a little more than US $5 per load.

Miners and many tour guides bear the harsh conditions without a gas mask or goggles every day. Our guide said he simply covers his mouth and nose with a bandana and holds his breath.

There has been controversy regarding tourism at the mine. While some tourists make the trek for the blue flame, others are interested in the mining work. National Geographic says some critics call it “poverty tourism” as tourists witness many miners bearing harsh conditions for little pay. The magazine says that others disagree, saying tourism can give the area an economic boost.

People are offered to try and lift the baskets full of sulfur. Some people take photos of the miners. While tourists are hiking and stopping for photos, miners are still hard at work. Some miners offer sulfur carvings for sale as souvenirs to make some extra cash.

My guide said he works in the mines from time to time. He said if it wasn’t for the tours, he would be a fulltime miner.

Dozens of hikers arrive at a base around 2 am and have a light breakfast – fried bananas with tea or coffee.

Hikers are given basic gas masks and flashlights, then people are broken off into small groups with a guide. Those with asthma may want to consider bringing their own mask.

For those who need assistance, there are so-called “taxis” available, which are basically jerry-rigged wagons. Guides push people up to the edge of the crater, but the taxi can’t make the trek down inside the crater to see the blue flames.

The wind picks up near the top of the crater. Dust from the crater can cause eyes to burn, tear up, and become red. It takes about another hour to hike down.

Tourists who make the trek down the crater, wear a gas mask close to the mine to protect them from the toxic fumes. The sulfuric clouds are visible but can blow in quickly.

A cloud can send tourists immediately fleeing the area, coughing. The sulfur burns eyes, chests tighten and lungs feel like they can’t function.

The blue flames are visible before sunrise, but the flames aren’t very predictable. Some days they can be large, and some days they won’t be there at all, according to our guide.

But even if hikers don’t get a chance to see the fire, the crater is still stunning.

Depending on the guide, some groups are in the heart of the crater during sunrise, and some are at the top. From inside, the surroundings slowly start to become visible. The sulfur is a bright yellow, and the lake is a vibrant turquoise blue.

The Ijen Crater is located in East Java, Indonesia. It’s about an hour and a half away from Banyuwangi, where many Ijen tours leave from. Trains run from Malang and Surabaya to Banyuwangi. From Bali, a ferry runs from the Gilimanuk port to Banyuwangi.

My friend and I stayed in Banyuwangi through Homestay Lidiya, and we booked through Airbnb.

Lidiya set us up with a tour that cost 350,000 rupiahs. We were picked up at midnight and brought back to our homestay at 9 am. We also stopped at a waterfall on our way back.

Tours can also be booked online or in East Java. There are some deals that combine Mount Bromo sunrise tour, Ijen Crater, and a transfer to Bali.

The crater is closed during the first Friday of every month, according to Lonely Planet. It also closes due to volcanic activity. 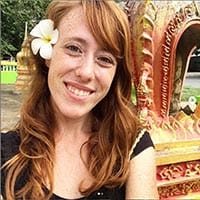 Caitlin Ashworth writes for the blog journalistonajourney.com. She was a news reporter for the Daily Hampshire Gazette in Northampton Massachusetts.  She has a bachelor’s degree in journalism and media studies. Now, she’s living in Thailand as an English teacher and traveling through Asia.