Exploring the Galapagos Islands on Land, My Way!

A wonderful friend asked me if I wanted to be her plus one on a luxury Galapagos cruise.  I hesitated a nano-second before I said YES!

I’m 100% certain it was the word ‘luxury’ that hooked me.  After all, who wouldn’t want to go on a luxury expedition?  Then I did a deep dive into the seven-day itinerary, and my heart sank.

I would be traveling with Ecoventura on their luxury yacht T•H•E•O•R•Y. Looking over the itinerary, six of the seven-day trip involved both land explorations and lots of water sports activities – snorkeling, paddleboarding, kayaking, and swimming.

I’ve never been good friends with the ocean. I’m a mountain girl, born and raised in Montana.

When I was eight years old, a near-drowning experience put the fear of water in me that I’ve carried all my life.

The idea of breathing through a tube underwater or falling into the deep blue from a paddleboard scares me to death.

It is no secret that the Galapagos Islands are a hot spot for photographers.

I chatted with a few shutterbug friends to get their perspective on the islands, then purchased a bigger lens per their recommendations.

I boarded the plane, knowing I would focus on land activities and photography, despite the fact that the Galapagos is one of the premier destinations in the world for snorkeling.

I had committed to the adventure, so I was determined to make the best of it, especially the “luxury” component.

To reach the islands, you fly from the mainland cities of Quito or Guayaquil, Ecuador to either San Cristobal or Balta, the only two airports in the Galapagos.

My journey started in San Cristobal, where the staff of our yacht T•H•E•O•R•Y greeted us at the airport and secured our luggage.

The first stop was a brisk hike up to El Junco Lagoon, the only freshwater lake on the islands.  Afterward, we departed via a panga (inflatable zodiac) for a short ride out to our yacht.

The ships that operate in the Galapagos archipelago are relatively small, enabling them to maneuver around and into the islands.  T•H•E•O•R•Y held a maximum of 20 guests.

We were welcomed aboard by the captain and his crew, impeccably dressed with the warmest of smiles that never left their expressions during the seven days onboard.  A welcome cocktail, orientation, and safety briefings followed.

Next on the agenda was selecting the appropriate snorkeling gear.

Ugh….  I played along like I might give it a try, but watching my fellow travelers squeeze and gyrate themselves into the wet suits, I knew instantly there would be no snorkeling for this girl.

I took our guide Ceci aside and told her about my fear of water and water sports, and she assured me it was my choice on all activities – no pressure!

The Galapagos Islands, part of the Republic of Ecuador, are one of the most unique ecosystems in the world. 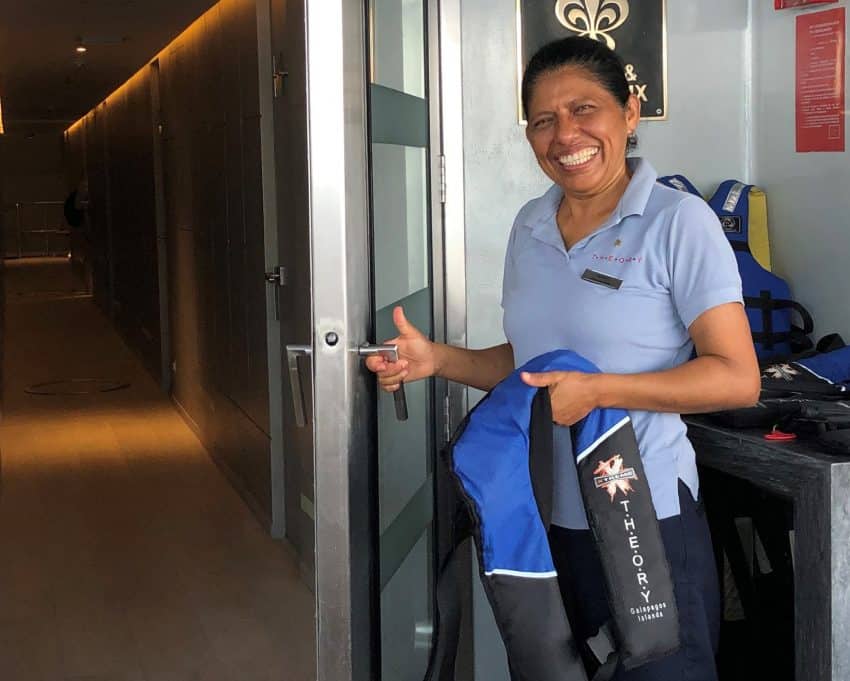 There are 233 islands, islets and rocks that make up the Galapagos National Park, but only 20 of these islands are suitable for visitors, either by exploring on land, water or both.

Within the Park, there are over 7,000 species of native and endemic plants and animals.

Preservation and protection of this archipelago is a serious business not only with the Park but with various conservation groups, and local guides and tour companies who make their living off these islands.

The Park sets the schedules each year for any operator that explores the Park and requires each group to be accompanied by a guide or naturalist.

These rules prevent overcrowding.  There were only a few occasions on any island where I saw another small group, creating an atmosphere of a landscape undisturbed by humans.

T•H•E•O•R•Y was allowed to stop at seven islands during the week I sailed. We divided into two groups of ten, with either Ceci or Billy, our very knowledgeable naturalists, leading the charge.  They watched with eagle eyes to be sure we didn’t wander off the trail during the land excursions.

I set foot on San Cristobal, Española, Floreana, Santa Cruz, Bartolome, South Plaza, and North Seymour.  Each island had distinct geographical features, but the common factor was the plethora of birds and wildlife, none of which had a fear of humans.

The first stop, once we left San Cristobal was Española, known for an abundance of marine iguanas.  These reptiles, with their beady eyes, resembled something out of a horror movie.

They are shades of black, except during mating season when they turn the Christmas colors of red and green.

At times, I was only two to three feet from these creatures.  Surrounded by fellow travelers and having Billy at arm’s length helped control my fear of these creepy-crawly reptiles so I could focus on getting the shots.

Española was also home to hundreds of Nazca boobies, many with their young, and a profusion of sea lions lounging about in the sun.

Santa Cruz, the second largest of the islands in the Galapagos, is home to the giant tortoises which are native to the Galapagos.

A short bus ride from the main town of Playa Ayora took us into the interior highlands, where we wandered through natural reserves of grasslands, dotted with ponds and trees to see these creatures.

They can weigh up to 900 lbs., with an average lifespan of 100 years or more.
Darwin Research Station

On the outskirts of Playa Ayora, we stopped at the Charles Darwin Research Station, which serves as a breeding center for the giant tortoises.  A walk through their interpretation center left me with a sense of the history behind these islands.

On the north shore of Santa Cruz, we spent time at Bachas Beach, where some chose to swim, but I became fascinated with trying to photograph the colorful Sally Lightfoot crabs.   Visible on the beach were jagged pinnacles of rusty metal, which we learned were the remains of a WWII barge.

At the end of the war, the American army abandoned two barges, which eventually floated onto the shore, and today, form a unique sculpture in the sand.

A panga ride along the shores of Bartolome Island enabled us to see the adorable Galapagos penguins, the smallest of all the penguin family at about 19” tall.

Floreana Island provided an opportunity to observe the American flamingos that hang out in the lagoons.  San Cristobal was a hotbed of sea lions and Nazca boobies, many with their young close at hand.

My favorite island was North Seymour.  First to greet us was the yellow-colored land iguana, munching on prickly pear cactus.

Both species of the iguana (land and marine) are endemic to the Islands.  The trail led us past Blue-footed boobies and lava lizards. Brown pelicans and Swallowtail gulls were hanging out.

Best of all was the abundance of Magnificent frigatebirds, that entertained with courtship dancing.   The males inflate their red throat pouches to huge balloons during the mating season.

With their colossal wingspan, frigatebirds can glide on thermal air currents for days at a time.

After every excursion, the staff was there to dispense drinks and snacks on the sun deck.

Any time we left the ship, our room was serviced, meaning a few times each day, the housekeepers unobtrusively came in to straighten things up and refresh towels if needed.  Turn down service every night yielded a tiny box of chocolates on the pillow.

Elegant three-course dinners served with the appropriate wines were the norm. I was adapting nicely to the “luxury” experience.

It was the unexpected moves from the crew that left the biggest impression on me.  When the panga returned to T•H•E•O•R•Y  after our outings, more often than not Captain Jhon was there to welcome us and lend a hand to get us safely back onto the yacht.

Maria, a member of the housekeeping staff, was also there when we returned, with a hose in hand to wash the sand off our sandals and feet.

When a school of dolphins appeared, the Captain maneuvered the ship so we could follow these playful creatures as they frolicked alongside our vessel.

During the week, all guests were invited to the bridge, where the Captain carefully explained the purpose of each dial and instrument.

The staff had gone beyond expected luxury and had formed a bond of friendship that continues today as we stay in touch through social media.

By week’s end, I clearly understood why not only photographers but anyone who visits the Galapagos counts this destination as one of their best trips ever.

The abundance and diversity of wildlife in this volcanic Archipelago is like nowhere on earth.

I had ambled through the living space of so many creatures who paid me no mind, creating ideal conditions to photograph.

Not for a minute did I feel cheated for not having snorkeled or played in the ocean.

The fact I had experienced this destination on a luxury yacht was simply frosting on the cake.  In the words of Frank Sinatra, “I did it my way.”

Now comes the joy of editing over 3,000 photos.